Just How Strong Will China's Military Be in 2025? 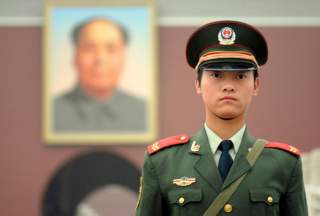 The People’s Liberation Army and its constituent branches have undergone extraordinary change over the last fifteen years.  Doctrine, equipment, training, and strategic orientation have all evolved to the point that the PLA, the PLAN, and the PLAAF have become nearly unrecognizable from the vantage of the 1990s, when they used antiquated equipment, concentrated on making money rather than preparing to fight, and still looked for threats from the north rather than from the east.

One area in which China remains dramatically behind the United States is in operational experience.  For good or (mostly) ill, the United States has embroiled itself in a series of “wars on terror” which have given its armed forces tremendous experience in the day-to-day execution of military force.  These wars have not, to be fair, allowed the military services of the United States to engage in high intensity combat against a peer competitor, but they have nevertheless illuminated key concepts, provided the opportunity for training under fire, and forced the various elements of the U.S. military machine to figure out how to work together. This is experiential, tacit knowledge, and it sets functional military organizations apart from ones that look good but have never been tested under fire.

The PLA lacks such hands on experience, and it’s not clear that China is planning to start an endless, pointless series of wars in order to acquire it. However, there’s little question that China has stepped up its efforts at building experiential knowledge through improving its realistic training procedures (China’s version of Red Flag) and by conducting more overseas deployments of air, land, and naval forces.

In every war, the U.S. armed services grow closer together, developing the procedures and communications techniques they need in order to perform as an effective team. In every peace, the U.S. armed services grow farther apart, as each pursues internal, parochial goals at the expense of joint training, procurement, and planning.  Congress intended the Goldwater-Nichols reforms of 1986 to ameliorate this problem, and to an extent they have; the serious problems of inter-service conflict suffered by the U.S. military in Iraq (1991), Afghanistan, and Iraq (2003) were less consequential, and less dangerous, than those suffered in Korea, Vietnam, or the brushfire operations of the late 1970s and early 1980s.

The PLA has developed an incredibly complex “system of anti-access systems” that relies on air, sea, and land assets in order to deny U.S. forces control of China’s littoral.  This system of systems only functions properly if the organizations responsible for it can work together.  As of yet, there’s not much indication that the land forces of the PLA, the Second Artillery, the PLAAF, and the PLAN have engaged in the work necessary to make them function as a coherent whole.  The Chinese military in the Sino-Vietnam war did not do well on this score; land forces could rarely rely on air or naval support, with predictable results.  The stakes are even higher now, and there seems to be some indication that Chinese military leaders understand that the different components of the PLA need goading in order to support a shared vision of warfare.

Despite the extraordinary steps that China’s defense industry has taken in the last decade, it remains depressingly dependent on Russian technology and Russian suppliers. Chinese weapons need Russian spare parts, and Chinese industry continues to require Russian advice. As of this writing, China continues to strongly consider the possibility of buying advanced Russian equipment off-the-shelf, including Su-35 fighters and advanced surface-to-air missile systems.

In the next decade, we should expect China to shed much of its remaining dependence.  Russia itself seems to understand that it can no longer remain ahead of China on the technological frontier, and thus that it can relax its concerns about technology transfer.  Chinese engines are improving, and the electronic components that it equips into its weapons increasingly come from China’s dynamic tech sector (abetted by intellectual property stolen from the West) rather than from Russia. The relationship between the Russian and Chinese military-industrial complexes has been long and deeply complicated, punctuated with several political and technological revolutions, but the next decade should see the final emergence of the Chinese military-industrial complex from the Russian shadow, along with the end of Chinese dependence on Russian supply and technology.

China’s biggest problem with respect to the military balance with the United States may be its almost complete absence of allies. Only Pakistan (which also has a troubled alliance relationship with the United States) and North Korea (which has its own litany of problems) rely on China for defense, and for military technology.

The next decade will almost certainly not see the development of a China-centric alliance system; indeed, the opposite (a China-phobic alliance) is far more likely.  However, in the next ten years we probably should expect that China will break into the top tiers of the arms export business, possibly displacing Russia in a number of key technological areas. Chinese land vehicles, small naval vessels, fighters, and submarines have enjoyed considerable recent success in the international arms export market.  The sale of these weapons does not necessarily win China close friends--Beijing has no interest in the sort of “generosity” that Moscow displayed in arms transfers during the 1960s and 1970s--but it almost certainly means the development of long-term political and economic connection between the PLA and military organizations around the world. The possible sales of submarines to Thailand or JF-17 fighters to Argentina brings with it the long-term need for Chinese maintenance, training, advising, and upgrade possibilities.  Like the United States, Russia, and France, China can leverage those relationships for political, as well as economic, benefit.

Analysts of Chinese military power have long concentrated on the ability of the PLA and its components to carve out and protect a space near China’s borders (and coastlines). This effort continues, but the reach of China’s system of anti-access systems now extends well into the Pacific and Indian Oceans.  As part of the process of extending its defensive systems, the PLA has developed and acquired a very serious set of long-range offensive weapons.

This set of systems, including long-range aircraft, diesel-electric submarines, cruise missiles, and ballistic missiles, has developed in tandem with the construction of more traditional long-range platforms.  These include large surface warships, amphibious assault vessels, nuclear submarines, and of course aircraft carriers. Together, the increase in firepower and presence means that the Chinese military has a greater effective reach than it has ever enjoyed.  Over the next decade, as China’s long-range precision weapons continue to increase in number and sophistication, and as China’s long-range naval and air platforms proliferate, the Chinese military will achieve greater reach than any military in the world, other than the U.S.

Over the next decade, Chinese military officers will train to fight against the most advanced military machine in the world, with the expectation that they will do so on a nearly equal technological playing field.  The United States seeks to maintain its advantage through the “third offset,” an effort to leverage dual use technologies to keep the U.S. military ahead of the PLA and its other competitors.  The third offset may work, but even if it does the Chinese military will continue to change and adapt. This adaptation has implications beyond the U.S.-China relationship; it will affect how Beijing interacts with Russia, Japan, India, and the nations of Southeast Asia.