Just Say No: America Should Avoid These Wars 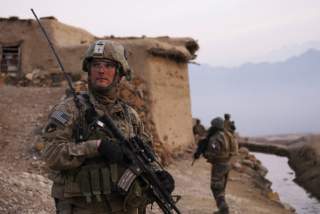 Critics of U.S. foreign policy often complain that a president has no strategy. What they usually mean is that the president's strategy does not assign a sufficiently high priority to their favorite overseas projects. It is a useful exercise to review how many projects critics of this president now have in mind, projects that require significant U.S. military power, and which risk the need for even greater force if they go awry. To attempt all of these projects simultaneously would violate a basic principle of strategy—the principle of concentration.

Between Europe and the greater Middle East, important members of the foreign-policy establishment, Republicans and Democrats, now support five major military projects—in Ukraine, Iran, Syria, Iraq and Afghanistan. (Waiting just offstage is the containment of China.) Some, such as Senator John McCain (R-AZ), support all five. Others only speak enthusiastically about one or two projects, but do not recommend restraint on others. Were the U.S. president to accept the advice of these worthies, he would be making foreign policy not the "shield of the republic," but its purpose. All domestic problems would take a back seat. Let us review the costs, risks and odds of success of these policies.

Perhaps the riskiest policy has been proposed by a group of muscular liberal Atlanticists— all veterans of senior foreign- and defense-policy positions— who demand that the United States supply a billion dollars a year worth of military equipment to Ukraine to thwart Russian aggression. In his confirmation hearings, Defense Secretary designate Ashton Carter seconded the motion.

The purpose of this effort is to increase the cost to Russia of supporting secessionists in the breakaway provinces of Luhansk and Donetsk, thus producing some unspecified happy outcome. These advocates offer no clear statement of U.S. strategic interests in the conflict, because there aren't any. Russia is at best a middle power in decline, weaker economically than any of the middle powers in Europe, and these provinces can affect that trajectory almost not at all. The outcome of this fight can have no effect on American security. But, it is clear that Russia perceives itself to have important strategic interests there. Russia is much stronger than Ukraine. The question needs to be asked, is it likely that these U.S. weapons could make much difference in the outcome if Russia is as committed as it seems? The answer is probably not. The next question is, what do these experts recommend the United States do if Russia is undeterred by a modestly improved Ukrainian army? Are they willing to accept an obvious defeat for U.S. arms and assistance? Or is their plan to escalate? Given the strategic unimportance of the stake, is escalation of this conflict with a nuclear-armed Russia in the U.S. national interest?

Project number two is the effort to end the Iranian nuclear-energy program. The president, leading a group that includes Russia, China, Britain, France and Germany, is trying to negotiate an agreement with Iran that will bring this energy program under intense surveillance, and reduce the size of the program such that it would take some time for Iran to move from a decision to an actual nuclear weapon. Economic sanctions and the collapse of oil prices have presumably played an important role in bringing Iran to the negotiating table. But for some in Congress, the expert community, and for Israeli Prime Minister Benjamin Netanyahu, this is not enough. They want Iran to have no capability. And they seem willing to deprive the president of the carrots he needs to induce Iran to cooperate. So what if the opponents of diplomacy succeed? These critics do have a happy ending in mind; ever-stricter sanctions that will somehow cause Iran to capitulate. This seems unlikely, because other states will likely abandon the sanctions regime if Congress proves an obstacle to an agreement. And when this happens, only one option will remain—a U.S. military operation to destroy Iran's nuclear infrastructure. It is implausible that Iran will not retaliate. A cycle of attack and counterattack seems more likely, which will prove to be an open-ended project for the U.S. military.

Two major interrelated projects have been proposed in Iraq and Syria. ISIL is a major player in the civil wars in both countries, and sets new standards for viciousness, fanaticism and ambition. The argument for containing this threat is reasonable, and the neighboring powers are beginning to see their interest in doing so. The United States should be willing to help, but we know from past experience that too much American involvement will mean both too little local action, and too much grist for the propaganda mills of our enemies.

The United States should not be "on the offense" as many suggest. Rather, we should help others contain the ISIL threat, and wait for these fanatics to make mistakes that further alienate them from the region, which they are doing. Though ISIL's treatment of its captives is horrendous, we can already see that President Obama's instinct, which has been to shore up defenses and wait for opportunities, is being vindicated.

Others, of course, wish to do more. Some advocate deep involvement by the United States in Iraqi internal politics to lead Shiites and Sunnis to a grand reconciliation. Outsiders cannot manage such a monumental political and social transformation; we tried it already, and failed. New attempts to do so will simply implicate the United States in promises that it cannot keep. And if we help the Shiite government take the offense to reoccupy Sunni-majority areas that ISIL has seized, the revenge killings that we will have enabled will redound to our political disadvantage.

Even more ambitious plans have been advanced for Syria. There we are told that the United States must simultaneously organize wars against the Assad regime, ISIL and Al Qaeda–affiliated groups, such as the Al Nusra Front. Partisans of this effort seem to believe that we can train and arm sufficient numbers of moderate Sunni rebels to take on all comers, presumably backed by Western air power. To state the theory is to acknowledge its absurdity. The Assad regime and its Islamist challengers have tens of thousands of highly motivated, well trained, and well-armed soldiers in the field. It is not remotely plausible that we can, with little training camps in other countries, build a force of comparable capability. This war on three fronts can only end one way— with a direct commitment of tens of thousands of U.S. ground troops to Syria.

Finally, Afghanistan is the war that will not end. The president promised to end that war responsibly, but the Afghan security forces are not large or capable enough to defend the state on their own, and there is no credible plan to remedy their deficiencies. Afghanistan is also famously corrupt, and the present government consists of two political camps that share power mainly because the United States forced them to do so.

Though U.S. forces are no longer carrying the major burden of offensive combat operations, the U.S. military wants to keep a rather large force in Afghanistan to provide training, logistical, intelligence and long-range fire support to the Afghans. The experience in Iraq, of local forces that U.S. officials believed they had trained to a level of basic competence, only to disintegrate at the first sign of serious pressure, makes U.S. senior military officers chary of ever leaving the Afghans to manage their own politics and their own war. At the same time, however, is there reason to believe that ten thousand Americans can prop up this regime forever, or, for that matter, that local politics would allow them to stay forever?

The U.S. foreign- and security-policy establishment, which spans the two political parties, seems to only know how to generate new projects. These experts count on U.S. military power to produce good outcomes, even where local politics seems quite resistant to our efforts. Local adversary military forces have proven tough and casualty-insensitive. Though they lack the technological and tactical virtuosity of our own skilled professionals, they care enough and are clever enough to inflict casualties and costs, and they have the advantage of fighting on their own home turf. The United States has been nearly constantly at war since the collapse of the Soviet Union, but in none of the places where we have fought can we claim happy endings. Citizens should ask two questions. First, what is the proposed military and political strategy that advocates believe will produce real success in each of these projects? And second, given scarce resources, which of these projects matter most, and which can wait?