Just Say "No": Time to End the War on Drugs in Afghanistan 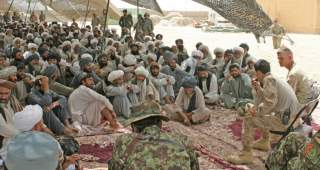 A new report by the Special Inspector General for Afghanistan Reconstruction (SIGAR) confirms that the war on drugs in that country has been a failure, although few within the Obama administration are willing to admit it publicly. After more than a decade of reconstruction, and over $7 billion spent on counternarcotic operations, opium poppy cultivation reached an all-time high in 2013, surpassing its previous peak in 2007.

And, with the United States slated to reduce its presence in Afghanistan, the problem is likely to get worse. Special Inspector General John F. Sopko, in a cover letter to the report, predicts that, given the “deteriorating security in many parts of rural Afghanistan and low levels of eradication of poppy fields, further increases in cultivation are likely in 2014.”

The situation in Afghanistan should come as a surprise to no one. For more than a decade, Afghanistan has been the leading supplier of opium (the raw ingredient for heroin), displacing Myanmar (Burma) and other once-dominant source countries.

As the 2014 World Drug Report from the United Nations Office on Drugs and Crime indicates, global consumer demand for heroin (and other illegal drugs) remains robust. With regard to heroin, modest declines in Western Europe have been largely offset by increased use throughout much of Eastern Europe and South Asia. The problem of “injectable drugs,” (primarily heroin), the report emphasizes, is “particularly stark in Eastern and Southeastern Europe.”

Afghanistan is ideally positioned to fulfill that demand, both because of its relative proximity to the main consumer markets compared to other source countries, and because the volatile internal security environment allows drug trafficking to flourish. But it would be a mistake to assume that the drug trade is exclusively the province of the Taliban and its allies. As noted in a September 2009 Cato Institute White Paper, there were strong indications that supporters of the government in Kabul under then president Hamid Karzai were deeply involved in the drug trade. Afghans witnessed the proliferation of new mansions in the capital and other major cities, which they dubbed “poppy palaces.” That situation has not changed for the better in recent years.

Given the tens of billions of dollars in potential profits from the trade in illegal drugs, attempting to eradicate the supply flowing from Afghanistan is an exercise in futility. As the UN report confirms, retail prices for heroin have remained within a narrow range since 2003. There has been neither a price spike (which would signal supply constraints caused by successful eradication and interdiction efforts), nor a price plunge (which might indicate sagging demand.) Instead, the modest extent of price fluctuations suggests a steady, profitable trade for producers.

The failure of the drug war in Afghanistan is merely the latest iteration of the frustrating results so common in other regions where Washington has led campaigns to drastically curtail trafficking, especially in Mexico, Central America and South America. A 2011 report from the Global Commission on Drug Policy, a blue ribbon panel that included such luminaries as former U.S. secretary of state George P. Shultz, former UN secretary general Kofi Annan, former chairman of the U.S. Federal Reserve Paul Volcker and international business titan Richard Branson, put the matter succinctly. The report concluded that:

“vast expenditures on criminalization and repressive measures directed at consumers of illegal drugs have clearly failed to effectively curtail supply or consumption. Apparent victories in eliminating one source or trafficking organization are negated instantly by the emergence of other sources and traffickers.”

Indeed, Afghanistan’s rise to prominence as a leading drug-source country followed “victories” in Myanmar, Thailand and other producers of opium. But efforts to wage a crusade against drugs in Afghanistan were even more ill-advised than those earlier campaigns, since that goal greatly complicated the primary mission of the U.S.-led military intervention there: defeating Al Qaeda and the Taliban.

As the United States reduces its presence in Afghanistan, now seems an appropriate time to contemplate possible changes in the U.S. approach to counternarcotics. In a cover letter addressed to the heads of the four agencies with responsibility for the U.S. government’s efforts—State, Defense, Justice and U.S. AID—Special Inspector General Sopko urges them “to consider the trends in opium cultivation and the effectiveness of past counternarcotics efforts when planning future initiatives.” Two responses attached to the report signal an interesting divide within the U.S. government.

The State Department, via the U.S. Embassy in Kabul, admits that “there is no silver bullet to eliminate drug cultivation or production in Afghanistan,” and that success ultimately hinges on “building Afghan capacity to implement and lead counternarcotics efforts.” “Our counternarcotics goals,” the letter goes on to say, “can be accomplished only when these are also Afghan counternarcotics goals.” And, on an optimistic note, the Embassy proclaims, “We look forward to the new Afghan government assuming a leadership role.”

The Department of Defense harbors no such illusions about the Kabul regime’s commitment or competence regarding the drug war. Indeed, the letter by Michael D. Lumpkin, Assistant Secretary of Defense for Special Operations/Low Intensity Conflict, strongly implies that DoD has effectively declared the counternarcotics effort lost and not worth fighting any longer.

In a direct contradiction to what the Embassy had concluded, Lumpkin writes that “the failure to reduce poppy cultivation and increase eradication is due to the lack of Afghan government support for the effort.” In addition, he notes that “poverty, corruption, the terrorism nexus to the narcotics trade, and access to alternative livelihood opportunities that provide an equal or greater profit than poppy cultivation are all contributors to the Afghan drug problem.” In other words, all things that the U.S. government doesn’t control and can’t control.

Taking up Sopko’s charge that those responsible for U.S. policy apply lessons learned, Lumpkin’s response boils down to this: We have done as you have asked, and decided that we don’t wish to be involved at all. “Since DoD does not conduct eradication activities in Afghanistan and the report provides no new information related to our Department, we respectfully request you remove Secretary Hagel as an addressee.”

Given the U.S. government’s abysmal track record in knowing when to cut its losses, it is unlikely that the rest of the Obama administration will follow DoD’s lead and declare the whole enterprise a waste of effort. One can imagine another SIGAR report, ten years and an additional $7 billion from now, informing Obama’s successors that poppy cultivation is going strong in Afghanistan, and that the global drug trade remains alive and well. But we hold out some small hope that sensible views will eventually prevail.

Christopher Preble is vice president for defense and foreign policy studies at the Cato Institute and the author of three books, including The Power Problem: How American Military Dominance Makes Us Less Safe, Less Prosperous, and Less Free.