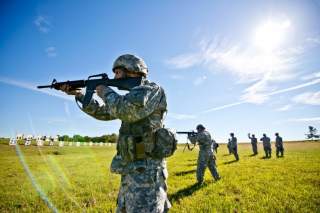 The relationship between ends and means is one that is crucial to get right in any conflict, and the launching of attacks against ISIS in recent days makes the discussion more important now than ever. Not only can the relationship between the two guide us through the subjective decision to wage war at all, but it can also guide our conduct in war as we consider whether one can ever justify the other.

There were many interesting components of the recent testimony by Secretary of Defense Chuck Hagel and Chairmen of the Joint Chiefs Martin Dempsey, but none perhaps so much as the evaluation of the special relationship between these two elements: ends and means. In his remarks, Secretary Hagel laid out clearly both the ends he and the president sought, as well as the ways they proposed to achieve them.

If the secretary’s remarks had been the only ones we heard that week, we could be relatively comfortable that the fight to destroy ISIS was one that fit within the bounds of jus ad bellum (loosely, the right to wage war). Indeed, to meet this categorization, Just War Theory tells us that five basic criteria must be met: War must be declared by the right authority (traditionally, this is a state), declared in pursuit of a just cause, be a proportionate response, be used as a last resort and be used with probability of success.

The first four criteria are easily—if subjectively—met when we consider the wide coalition that is forming around the objective to destroy ISIS, the indiscriminate violence ISIS is waging against civilians, the choice to use (limited) air, ground and humanitarian support and also the recent history of power vacuums in both Iraq and Syria.

But, if we add Chairman Dempsey’s remarks into our analysis, the picture of justice takes on a different hue. In his remarks, Chairman Dempsey boldly urged Congress to realize that the support of ends does not necessarily entail the support of the means. Indeed, in his words, he is “growing increasingly uncomfortable that the will to provide means does not match the will to pursue ends.” With this observation, Chairman Dempsey’s remarks call into question the probability of success criteria, because that probability is limited not by our ability to fight, but also by our willingness to fund. This danger is present at every level of the strategy.

The elements of the strategy to defeat ISIS will ensure many of the things that currently make ISIS strong will increase in the short term. By this we mean that the decision to use limited air strikes and to provide ground support via assistance for Iraqi, Kurdish and moderate Syrian fighters will, at least initially, bolster ISIS’ argument that the Islamic State is under attack. We can be sure they will get this message out to future supporters with an increased onslaught of videos of martyred violence and righteous glory. Like we saw in Afghanistan, the important fight against ISIS will begin after the majority of their leaders have been killed, when we respond to the vacuum left in their wake. If our means falter at this stage, as they have before, the probability of success criterion does not apply.

Next, the president plans an “all-inclusive approach to preventing attacks from [ISIS] against the homeland of the United States and our allies.” This, too, is a goal worth pursuing, but is it one we are committed to achieving? While the failures in detecting September 11 led to much discussion about the harmful “stove pipes” of the American intelligence community and using the term “whole of government” became popular, it is not clear that the United States has yet fully embraced the philosophy in practice. In the last year, the United States Congress couldn’t communicate well enough across parties to keep the government running. Are we to assume the far more complex differences present between the CIA, FBI, and local law enforcement will be easier to surmount?

Finally, the humanitarian assistance we have pledged, though right, is also fraught with challenges. Many opposition organizations have built popular support by highlighting religious principles of fairness and equality in the face of corruption. The humanitarian aid we have given and plan to give does not go directly to the mouths of hungry children. Instead, it must surf through so deep a morass of competing interests, that it is remarkable that any ever reaches its target. In the meantime, ISIS can continue to campaign for the hearts and minds as we lose ours in Syria, Iraq and at home.

Chairman Dempsey’s remarks were made in the context of a belief that while Americans are prepared to dabble with ISIS, we need to be prepared to fight them in a comprehensive and sustained way. But in the twilight of two wars of limited success, are we committed to doing this? If not, our probability of success is in jeopardy. Can we then say the war is just?

Machiavelli is sometimes credited with having generated the idea that the ends justify the means. But what we must remember is that however one interprets Machiavelli, he never suggests that the ends provide the means. And if America is not prepared to supply the means necessary to achieve a just end, then the probability of success is in greater jeopardy than if we had never decided to destroy ISIS at all. The message here is that we must be prepared to resource for success and fight until ISIS and thus the latest variant of radical violent extremism is no more. Doing any less endangers our ability to claim that our latest war is just.

Robert Sharp is an Associate Professor at the National Defense University's Near East South Asia Center for Strategic Studies.

Jennifer Jefferis is an associate professor at the UAE National Defense College. She holds a PhD in political science with specialization in religion and violence, and processes of radicalization. Dr. Jefferis is the author of Religion and Political Violence: Sacred Protest in the Modern World (Routledge 2009) and Armed for Life: The Army of God and Anti-Abortion Violence in the United States (Praeger 2011). The views expressed in this article are those of the authors alone and do not represent the official policy or position of the National Defense University, the Department of Defense, or the U.S. Government.