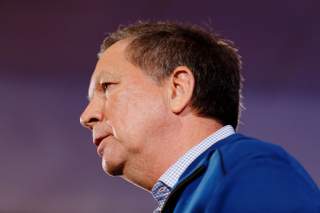 The Republican Party is heir to a failed foreign policy that it has never fully confronted. The man who forced a partial confrontation has just secured the party’s nomination. But the reaction of the party elite appears to be that the best approach is to return, as soon as possible, to the old doctrines and nostrums and that it best to focus, not on the current election, but on establishing the parameters for 2020.

How else to interpret Ohio Governor John Kasich’s speech on Tuesday afternoon implicitly decrying Donald Trump to the International Republican Institute? House Speaker Paul Ryan is bobbing and weaving when it comes to Trump, endorsing the general idea of his presidency but attacking the particulars. By contrast, Kasich is adopting a much tougher stand. He already had something of a score to settle as he spoke to the GOP grandees on Tuesday.

Robert Draper reports in the New York Times that in May Donald Trump Jr. had apparently offered the vice presidency to Kasich and said that he would wield unprecedented influence on foreign and domestic policy, while Trump's role would be to “make America great again.” Kasich refused. There matters appeared to rest. Then, on Monday Paul Manafort, Trump’s campaign adviser, scoffed at Kasich for refusing to support Trump: “He’s embarrassing his party in Ohio.” Today, Kasich, a former member of the House Armed Services Committee, fired back in the form of decrying Trump’s approach to foreign affairs.

Kasich has already made his hawkish bona fides abundantly clear in the past. He proceeds from a values-based, moralistic conception of foreign policy, one in which American might can almost always set wrong aright. In November 2015 he said that he would establish a government agency to disseminate “Judeo-Christian” values around the world in order to combat radical Islam. About Russian president Vladimir Putin he opined in August 2015, “He steps one foot into any more of this Western territory and NATO has an agreement that an attack on one is an attack on everybody.” For good measure, he said in December that it was “time we punched the Russians in the nose.”

No doubt a campaign trail is not exactly the venue for subtlety. But Kasich continues to espouse a Manichean view of the world. According to Kasich, “So we see in the world growing nationalism, growing isolationism, anti-immigration and anti-trade. Now, if you put all that together, what does that stew look like? What does it mean for the world? What does it mean for stability?... I’m very worried about it. I’m very, very concerned.”

Kasich’s most dire remarks concerned Ukraine. Here he pointed to the weakening of language in the Republican platform that went from demanding “lethal defensive weapons” for Ukraine to “appropriate assistance.” “As long as I’m berating air, I’m for arming the Ukrainians who want to fight for freedom.” He said it must have been a “terrible mistake” to take it out.

But it wasn’t a mistake. It was a deliberate and conscious move that was in line with Trump’s call for a more emollient policy towards Moscow. There’s plenty of room for disagreement about the best approach to adopt toward the conflict between Kiev and the Kremlin. But it’s hardly illegitimate to oppose sending weaponry to Ukraine that might well inflame the conflict. Anyway, what constitutes defensive weaponry? That is in the eye of the beholder. Sending weaponry might have the effect of emboldening the Kremlin to follow an even more truculent policy toward Ukraine, which currently resembles a frozen conflict—just how Russian President Vladimir Putin appears to like it. If you’re worried about Russian aggression, then sending weaponry is not necessarily the most astute policy to adopt.

What Kasich’s stand is truly redolent of is the recent document released by Paul Ryan called “A Better Way: Our Vision For A Confident America.” Ostensibly the document was aimed at the Obama administration. But the target was as much Trump. The rodomontade it contained about defining the war against terror as a war of values sounded like warmed over Kasich: “The motive power of Islamist terror is a worldview based on oppression—one that is as morally bankrupt as Communism or fascism. American can undermine this system of beliefs by countering it with our own. Accordingly, we must promote liberty and human dignity as the antidote to tyranny and terror—and show our enemies that their evil vision will never prevail over our enduring values.” The self-congratulatory tone of this passage is nauseating. It also perversely endows Islamic terrorism with a kind of internal ideological coherence that it simply doesn’t possess.

As they bleat about American values and power, Kasich and Co. are intent on restoring an idyllic world that never existed in the first place. Whatever his shortcomings—and there are plenty to criticize—Trump recognizes that there’s a problem with the standard GOP nostrums. His conservative critics haven’t even gotten that far.