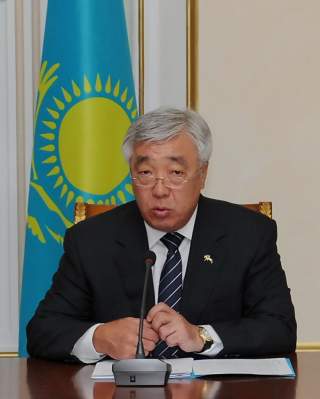 Minister Idrissov has enjoyed a long and distinguished career as a senior diplomat. In 1992, Mr. Idrissov was appointed Secretary of the Permanent Mission of Kazakhstan to the UN in New York City. Just three years later, he began work for the Ministry of Foreign Affairs of Kazakhstan as the Head of the American Department while also acting as Ambassador-at-Large. Idrissov later became assistant to the President of Kazakhstan, working on international issues. In 1997, he was nominated First Vice-Minister of Foreign Affairs. Following his service in this position, he was appointed Minister of Foreign Affairs of Kazakhstan in October 1999. Mr. Idrissov was posted to London in 2002 to serve as Ambassador to the UK, Norway, and Sweden. He continued to work in Europe until he was named Ambassador to the United States on July 7, 2007, where he is still remembered as one of the most effective, eloquent and formidable ambassadors in Washington.

Idrissov: We have world-class reserves in oil and gas, and coal; and we are the number one producer of natural uranium at the moment. Of course, having these resources, we plan to develop nuclear energy in Kazakhstan. We have experience, human capital–people who can build and run facilities for peaceful uses of nuclear energy. And we also have an impeccable record in terms of non-proliferation and export control, having contributed greatly to world security by renouncing the huge nuclear arsenal we inherited from the Soviet Union. Therefore, we want to make sure that we bring value to the nuclear sector. Not just producing natural uranium, but producing more added value from uranium.

We are cooperating with a number of leading countries in this industry and we hope that these relationships will continue to be fruitful. We have one facility in East Kazakhstan, which is dealing with these matters, and we hope that the capacity and quality of this facility will be enhanced. I’m talking about the Ulba Metallurgical Plant, which is producing fuel pellets, and we hope to develop the capacity to produce fuel assemblies. We also have plans to build nuclear power stations. So far we are thinking about developing two nuclear power stations in Kazakhstan. Because we believe that there is a future for nuclear power: it’s clean, efficient, and, having uranium resources in our hands, it will be strange that we don’t think about having nuclear power in Kazakhstan.

We are working quite concretely with the Russian Federation, and we are hoping that we will sign an agreement [on building a nuclear power plant] by the end of this year. We also have another location in Kazakhstan where we hope to build a nuclear power station. Of course, it will be done through an open competition, and the best technology, the best offer will win the project. I think and hope that our partners in the United States, France, Japan, China, South Korea, and others will participate in this offer.

Also, our national nuclear company KazAtomProm is in partnership with Toshiba and owns 10% of Westinghouse. In this area, too, we see potential for expanding Kazakhstan’s presence internationally.

Let me also remind you that we are partnering very closely with IAEA on a number of issues, including in ensuring the security of peaceful uses of nuclear energy in the global context. For that matter we are partnering with IAEA to build the first ever global nuclear fuel bank. Kazakhstan was chosen by the IAEA membership as the ideal location for this nuclear fuel bank, and we hope that after we jointly finalize the host country agreement we will see the birth of this first global nuclear fuel bank in Kazakhstan.

Idrissov: Our position on the Ukraine crisis has been made clear in our public statements several times.

Our relations with Russia were, are, and will be most close and productive. We are close allies, we are close partners, and we will continue to cooperate in all fields of security, regional and global, and international situations. Of course, the huge part of our relationship relates to economic cooperation. For that matter, together with Russia and Belarus, we recently joined in creating a Eurasian Economic Union. So the future for Kazakhstan and Russian relationship is bright and we want to continue to enhance our relationship with our largest neighbor by size.

On Ukraine, we are all witnessing the ongoing peace process. We welcomed the election of Petro Poroshenko in Ukraine on the 25th of May, and our Prime Minister participated at the official inauguration of the new Ukrainian president. He had a chance to meet with the newly elected president, Prime Minister Yatsenyuk, and other officials present at the inauguration, including U.S. Vice President Biden. We remain very much hopeful that [Poroshenko’s] peace plan will stay and will be implemented.

We, of course, took note of the announcement of the ceasefire the other day. We, of course, took note of the regular contacts between the president of Ukraine and his Russian counterpart, and we hope that all of these efforts will lead to a positive outcome. We also took note that most of the global leaders such as the U.S., Europe, Russia, and others, have welcomed the peace plan initiated by President Poroshenko.

Of course, today we saw the disturbing news that the ceasefire is not being respected, but we hope that these are temporary setbacks which will go into history and that both sides and all other parties who participate in facilitating the peace process will have courage, wisdom, and stamina to persevere to make the positive outcome. This is our hope, and we have a moral right for this position because Kazakhstan takes situation in Ukraine with great pain: we have a huge chunk of our population who are ethnic Ukrainians, about 300,000 people. Therefore, what happens in Ukraine is really dear to us, and we very sincerely hope for peace to sustain in Ukraine.

Heilbrunn: Do you have a strong personal impression of Mr. Putin?

Idrissov: Well, I don’t know him personally very well, but as an official I, of course, meet him at official events, and I can tell you that my impression is very strong and positive. He is a doer, he is a trustworthy person, and if he makes a deal he sticks to the deal.

Heilbrunn: I’d like now to turn to a different sphere, which is your relationship with China. Can you tell me about Kazakhstan’s relations with China and the direction they’re going?

Idrissov: Our foreign policy is very much guided by our geography. I just gave you an answer on our relations with our largest neighbor to the north, which is excellent, which has a bright future. It’s the same answer I will give you regarding our eastern neighbor, which is the largest by population. Kazakhstan’s relations with China are growing year on year, day by day. We have a very robust economic relationship. I will give you a couple of figures: when we became independent, our trade was around a few hundred million dollars, today our trade with China exceeds 24 billion dollars. This is a fantastic, unprecedented growth, reflecting the desire of the two countries to enhance economic, trade and investment cooperation. The quality of this relationship is also changing: if in the early years we were talking about the growth of trade, today we are talking about investment cooperation, particularly in high-tech areas.

China is investing not only in the energy sector, but is also eager to invest in infrastructure and high-tech parts of our economy, which is most welcome by Kazakhstan. China is also sharing our concept of developing connectivity in Eurasia. You know that Kazakhstan is the largest landlocked country in the world, and as such we are really keen to enhance our transit capacity and to ensure friendly accesses to global markets through China, Russia, other geographies. China has recently announced a new concept of the economic belt of the Silk Way. We are fully embracing the concept because it is fully satisfying what we ourselves think about developing connectivity for Kazakhstan and for the region.

At the end of May 2014, there was a state visit by our President Nursultan Nazarbayev before the Shanghai summit of the Conference on Interaction and Confidence-Building Measures in Asia (CICA). We had a full-fledged, full team-to-team negotiations with China where we have once again highlighted the importance of enhancing the already robust bilateral economic relationship. We also focused on the issues of ensuring, through joint efforts and through different arrangements and institutions, the regional and global security, and I think that the future of Kazakhstan’s relations with China is also very bright. Kazakhstan, with its 17 million people, of course, has much smaller population compared to China, but China is a good and very trustworthy and reliable neighbor.