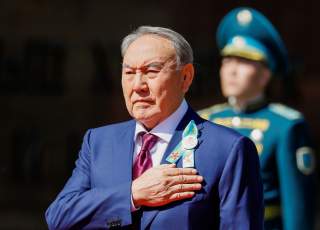 In June 2018, the speaker of Kazakhstan’s parliament, Kassym-Jomart Tokayev, “dropped a political bombshell” in an interview with the BBC. He said that the country’s President Nursultan Nazarbayev—who is seventy-eight years old and who has ruled the country since it gained independence from the Soviet Union in the early 1990s—would not run for re-election in 2020. Soon afterwards, Tokayev backtracked, saying that there was “no need to fuel a drama about what [he] said.”

Nevertheless, his comments led to increased speculation that focused on two related questions: When will Nazarbayev step down? And what will he do to ensure that a stable political transition takes place once he leaves office?

Indeed, any instability in Kazakhstan likely would concern Washington. Kazakhstan allows NATO to transport Afghanistan-bound supplies through its territory, and U.S. companies have invested billions of dollars in Kazakhstan’s oil and gas sectors. Also, Kazakhstan hosts the International Atomic Energy Agency’s uranium bank. It contains nuclear-reactor fuel, and the government is responsible for ensuring that the uranium stockpiles remain “secure and out of the hands of terrorists and criminal groups.”

While the country has been stable since independence, maintaining that stability in a post–Nazarbayev Kazakhstan will not be easy. The country has a history of inter-ethnic violence, and in the past Russia allegedly has stoked secessionist sentiments among Kazakhstan’s ethnic-Russian population. Moreover, Kazakhstan has a “soft authoritarian regime,” and its political institutions are quite weak. Nazarbayev’s party dominates the legislature, and the country’s elections have never been deemed free or fair. In 2017, the U.S. State Department reported that “corruption was widespread in the [country’s] executive branch, law enforcement agencies, local government administrations, the education system, and the judiciary.” As Paul Stronski, a senior fellow with the Carnegie Endowment for International Peace, points out, Nazarbayev has played an “essential role as the creator and guarantor of Kazakh sovereignty,” but has failed to create the “political and cultural institutions to ground the country in the post–Nazarbayev era.”

But Nazarbayev, it seems, is working to change that, and he appears to be pursuing a dual strategy to ensure a stable political transition: First, he gradually is de-concentrating power from the executive branch—likely in an attempt to prevent one small group or individual from accruing too much political clout and threatening his long-term economic and political interests. Second, he is compelling the country’s elites to invest in Kazakhstan’s economy. He has made it more difficult for some of them to stash their wealth abroad, and in turn created a situation whereby their financial interests increasingly depend on the strength of the wider Kazakh economy. Therefore, if there is political instability and the country’s economy struggles, then the elites will face the consequences along with everyone else.

Nazarbayev is unlikely to hand over power to a “trusted” successor from outside his family—in part because it is difficult to know who is loyal to him and who is merely loyal to the patronage system he created. These concerns likely were exacerbated by the recent leadership transition in neighboring Uzbekistan. In 2016, Uzbekistan’s authoritarian President Islam Karimov passed away, and the country’s Prime Minister Shavkat Mirziyoyev took over. Initially, it appeared that Karimov’s legacy would be protected. But that impression proved, at least to some extent, misguided. Once Mirziyoyev took over, he began consolidating his control over the country, removing some of Karimov’s allies from their posts and reportedly investigating the Karimov family’s dealings.

To avoid a repeat of the political transition in Uzbekistan, Nazarbayev is weakening Kazakhstan’s executive branch, thereby allowing him to remain an influential power broker in the country if and when he decides to step down. In March 2017, he endorsed several amendments, devolving some powers to the legislature (which is controlled by his party). More recently, in July 2018, the Kazakh parliament took up a bill, granting Nazarbayev the right to head the country’s Security Council “for [his] life time due to his historic mission.” The bill also changed the Council from a consultative body to a constitutional one, increasing its clout and ensuring Nazarbayev’s long-term influence. A presidential decree brought the bill into force—fittingly right before Nazarbayev’s seventy-eighth birthday.

That said, Nazarbayev appears to be wary of the country’s legal and political institutions and their ability to uphold his reforms in the future—an understandable concern given that he and his party have reworked the Kazakh constitution when they have found it politically expedient to do so. Nazarbayev, therefore, seems to be trying to get the elites more invested in the economic status quo, so that their fortunes depend on the Kazakh economy’s performance and, in turn, the country’s political stability. (An intra-elite power struggle could be one of the biggest threats to Kazakhstan’s stability once Nazarbayev steps down.) In January 2018, Nazarbayev said that “the withdrawal of capital by bank shareholders for the benefit of affiliated companies or persons should be a serious crime.” Several months later, in July 2018, his government implemented a law to limit capital outflows from the country. The law is meant to protect the country’s banks, but it also will make it more difficult for some well-connected Kazakhs to hide their money abroad. As the country’s National Bank chairman Daniyar Akishev described, the measures will allow his organization “greater . . . control over currency flows.” Tellingly, he said that “liberal principles of currency regulation will remain in force” for regular citizens.

It is not clear if and when Nazarbayev will step down, but he seems to be preparing for some sort of political transition. He has worked to deconsolidate power—likely in an attempt to handicap his successor’s authority—and to get the country’s elites invested in maintaining the status quo. However, a major paradox remains: as Nazarbayev increasingly tries to engineer the system to ensure a stable political transition, the more questions arise about how that system will function in his absence.

Wil Mackey works at the Congressional Research Service where he focuses on Central Asia-related issues. He received his MA from the Fletcher School of Law and Diplomacy.

The views expressed herein are those of the author and are not presented as those of the Congressional Research Service or the Library of Congress.