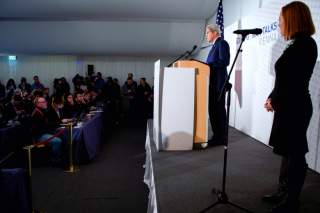 As many predicted, the United States, its partners and Iran were unable to wrap up their negotiations in Vienna on Iran’s nuclear program by the November 24 deadline. But there is no reason to panic—Tehran’s program remains in check, and we have time to get this right.

As Secretary of State John Kerry said in Vienna, “We’ve made progress and we need the time to finish.” He added, “This is not certainly the time to get up and walk away.”

Simply put, the consequences of failure—for all sides—are too dire to give up now. Ending the talks would significantly increase the possibility that Iran would accelerate its nuclear program and that the United States or Israel would launch military strikes. The last thing we need is yet another war in the Middle East.

There is no reason to risk such an outcome, which is clearly not in the interests of the United States, its allies, or its partners in the region. Iran’s nuclear program has been frozen and rolled back over the past year, and strong sanctions remain in place. Time is on our side, so let’s use it. Here’s how:

The first step is to realize that there is no significant downside to waiting a few more months to conclude a deal.

Critics will argue that Iran will use additional negotiating time to get closer to a bomb. But that possibility was foreclosed by the interim deal agreed to last November. That agreement, formally known as the Joint Plan of Action, required Iran to water down its most worrisome nuclear materials (uranium enriched to 20 percent U-235, which is dangerously close to what is needed to make a bomb) and keep its program in neutral. Thanks to more intrusive inspections, international monitors have confirmed that Iran is honoring its commitments. The interim deal is working.

As a result, in the past year, Tehran has moved away from a bomb, not closer to one, in exchange for limited sanctions relief. Extending the status quo means this trend will continue. This is a much better outcome than having the talks collapse.

The interim deal is good for now, but we still need a long-term agreement that further limits how large a nuclear program Tehran can have, how much nuclear material it can produce, and what kind of activities it can conduct. This is well worth a few more months of talks.

Since the status quo is relatively stable, there is no need to walk away from the talks prematurely or to sabotage them. Specifically, in January, the new GOP-controlled U.S. Congress must not politicize this issue by making unrealistic demands or placing additional economic sanctions on Iran, as Republican senators have threatened to do.

As administration officials have said repeatedly, new U.S. unilateral sanctions would be a disaster, provoking a series of unwelcome reactions. For example, if Washington gets the blame for scuttling the talks, the current set of international sanctions could unravel. U.S. sanctions are only effective if other key countries, like Russia and China, follow them, too. Moscow and Beijing support a nuclear deal primarily so they can get back to doing business with Tehran. If these nations see the United States unilaterally blocking a deal, they might decide to go their own way and resume trade with Iran.

The collapse of multilateral sanctions would undermine the key leverage that brought Tehran to the negotiating table in the first place. And once it is gone, it may be impossible to get it back.

Worse yet, new U.S. sanctions would also likely provoke Iran to resume its suspended efforts to produce nuclear-bomb materials and deny inspectors access to key facilities. We would then be flying blind and Iran’s nuclear program would be unconstrained.

This highly unstable situation would put us back on the path to another war in the Middle East. Both the United States and Israel would reach for plans to conduct military strikes. As National Security Council staff said earlier this year, “If certain members of Congress want the United States to take military action, they should be up front with the American public and say so.” Such strikes may set back Iran’s program temporarily, but they would also deepen Tehran’s resolve to get a bomb eventually.

Diplomacy is the only way to achieve a stable, long-term solution to the Iran nuclear crisis. A good deal would keep Iran’s nuclear program peaceful by setting firm limits and locking in intrusive inspections that would deter Tehran from violating the agreement.

So let’s keep talking to Iran. Diplomacy is much better than the alternatives—including war.

Tom Z. Collina is the Policy Director at Ploughshares Fund in Washington DC.