Keep Georgia on the Path to NATO 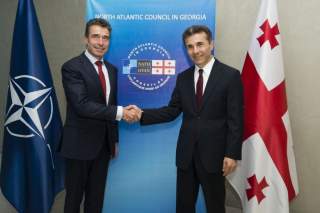 In 1738, the Persian ruler Nadir Shah captured Kandahar. He then prepared to march his vast army, including a contingent of Georgian warriors, deep into India to take on the Mughal Empire.

On its way to Sindh, in modern day Pakistan, the army encountered a column bearing an inscription that foretold death to those who went beyond it. A young Georgian prince named Erekle II overcame this discouragement by ordering the column placed on the back of an elephant. With the elephant leading the way, the army conquered Sindh. For Erekle’s leadership and the gallantry of his Georgian warriors, Nadir Shah bestowed upon him the kingdom of Kakheti. In part, this started a process that eventually led to the unified state we know today as the Republic of Georgia.

Georgian warriors are in Kandahar once again—with 750 soldiers serving as part of the NATO operation in Afghanistan. So what will be the reward for Georgia’s service this time around?

Well, it won’t be a MAP. The acronym stands for Membership Action Plan, a mechanism NATO uses to formalize a candidate country’s path to full membership. Back in June, NATO’s outgoing Secretary General, Anders Fogh Rasmussen, announced that Georgia would not receive its long-awaited MAP at this week’s NATO Summit in Wales. Instead, Tbilisi was promised a consolation prize of sorts—a “substantive package” of support that will bring Georgia closer to NATO.

There are three things the United States and NATO can and should do to show its support for Georgia. First, the United States must make sure that the summit declaration is clear on two key points: 1) As long as it meets the strict criteria, Georgia’s future is in NATO, and 2) no non-NATO country (i.e., Russia) has a veto over this.

Georgia was promised eventual membership at the NATO summit in Bucharest in 2008. Since then, not all members of the Alliance have been supportive. This is especially true of those countries inside NATO that have an uncomfortably close relationship with Russia. Those nations must now declare themselves.

Secondly, the United States and NATO members should sell defensive antitank and antiaircraft weaponry to Georgia. Every country has the inherent right to self-defense. So long as the weapons are defensive in nature, there is no reason not to provide them to the Georgian military. They have proven themselves on the battlefield.

Thirdly, the United States and NATO must continue joint military-training exercises with Georgia, even after combat operations in Afghanistan end. Training exercises are a visible sign of NATO’s support. The more the NATO flag flies in Georgia, the more the Georgian people will stay committed to Euro–Atlantic integration.

Make no mistake. The Georgians have earned this support.

After Russia’s invasion of Georgia in 2008 and its subsequent occupation of South Ossetia and Abkhazia (fully 20 percent of Georgia’s territory), Georgia has transformed its military and steadfastly supported international-security operations overseas. Georgia has contributed thousands of combat troops to Afghanistan and Iraq and hundreds of peacekeepers to the Balkans and the Central African Republic. Georgia does this even though it is not a member of NATO. In many ways, Georgia has been a model for other countries in Europe.

Some NATO members are concerned that Georgia’s entry into the alliance would automatically trigger a war with Russia over South Ossetia and Abkhazia. Georgian officials privately say that they are happy to accept a NATO membership arrangement that excludes the two occupied territories from NATO’s Article 5 security guarantee until the matter is resolved peacefully. To demonstrate its commitment, Georgia made a “non-use of force” pledge regarding the occupied territories, which Russia has failed to do.

Georgians have proven themselves to be gallant in combat. They are also undertaking a defense transformation program that is an example to all of NATO. This week’s summit offers an opportunity to reaffirm NATO’s commitment to Georgian membership, strengthen the NATO–Georgian relationship and enhance Georgia’s defensive capabilities. In the long run, this would bring more stability to the South Caucasus region.

The alliance should live up to its 2008 promise and keep Georgia on the track to NATO membership.

Luke Coffey, an expert on transatlantic relations, is the Margaret Thatcher Fellow in The Heritage Foundation’s Davis Institute for National Security and Foreign Policy Studies.