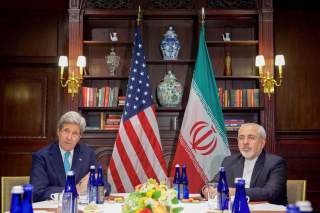 President-elect Hillary Clinton’s first phone call on the morning after the election, assuming she wins, should be to Secretary of State John Kerry. She should ask him to remain in her administration for at least six months to a year as her special envoy for Iran. While there has been chatter that she’ll give Kerry the boot from Foggy Bottom, wanting to make her own mark there—as would be her right as president—Kerry’s unique relationship with Iranian foreign minister Mohammad Javad Zarif, and hard-earned experience in the nuclear talks, warrant special consideration. He could serve the next administration well in institutionalizing the diplomatic progress made to date with Iran.

Although Clinton views Iran as a long-term strategic challenge and criticized her Democratic primary rival Bernie Sanders for supporting normalized relations with Tehran, she has committed to implementing the landmark nuclear deal. Within this context, appointing Kerry as special presidential envoy to Iran for at least six months to a year would benefit U.S. strategic interests, by helping pass the torch that is the nascent relationship between the United States and Iran.

Appointing a previous administration’s cabinet member to a role in a new administration is not unprecedented. Indeed, the Obama administration has done so at least twice. In 2009, President Obama appointed Larry Summers, who served as Treasury Secretary during the Bill Clinton administration, director of the White House National Economic Council, where he contributed to the Obama administration’s response to the Great Recession. More notably, President Obama retained his immediate predecessor’s secretary of defense, Robert Gates, until 2011. When announcement was made of Gates’ retention at the Department of Defense, it was widely praised, as it reflected the importance of continuity at a time of war in Iraq and Afghanistan. Similarly, the importance of continuity at a time of diplomatic breakthrough cannot be overstated. Continuing the progress that has been achieved through the nuclear agreement and in parallel interactions between the United States and Iran can yield significant benefits to both countries’ interests.

To be certain, Kerry and Zarif have developed a functional and productive working relationship over the years amid a backdrop of mutual distrust between the United States and Iran. This relationship is what led to last year’s historic agreement, and has since taken the bilateral relationship to unprecedented levels, insofar as they are communicating two to three times a day, depending on the circumstances. To be sure, since signing the Joint Comprehensive Plan of Action (JCPOA) and as a result of the Kerry-Zarif relationships, Iran was formally invited to join the Vienna peace talks for Syria, American sailors detained by Iran’s Revolutionary Guards were returned swiftly and safely, a prisoner swap brought home prisoners of conscience, a thirty-five-year-old financial dispute was resolved, and implementation of the nuclear deal has been progressing despite concerns that Washington is not fulfilling its sanctions-related obligations, a sticking point that Kerry has tried to address following complaints by Zarif.

Appointing Kerry as special presidential envoy would have the mission of ensuring a smooth transition for the new administration on relations with Iran, including the continued implementation of the JCPOA, engagement on matters of common concern such as the Syrian conflict via the Vienna talks, and it would continue to serve as a de facto hotline to Iran to defuse potential crises, particularly as political infighting in Iran is translating into provocative action by hard-line elements. As special presidential envoy, Kerry would brief the new president on the intricacies of U.S.-Iran relations and continue to be the bridge to Iran’s foreign ministry as his successor develops his or her own working relationship with Zarif. A smooth transition on Iran would yield dividends in that Iran is also facing a presidential election later this spring, potentially ushering the end of Zarif’s tenure as chief Iranian diplomat. In this scenario, retaining Kerry would provide stability and continuity as opposed to having two fresh foreign ministers at the helm.

Despite the hurdles standing in the way of improved U.S.-Iran relations, significant diplomatic progress has been made over the past few years in large part due to Kerry’s relationship with Zarif—progress that is worth preserving. As President Obama’s Deputy National Security Adviser Ben Rhodes has said about Iran, “there is no reason why we have to remain in a cycle of conflict.” That next cycle begins with the next administration, and retaining Kerry, even for a short period, can only help break that cycle.

Navid Hassibi is a founding director of the Council on International Policy and tweets @navidhassibi. The opinions expressed here represent his own.