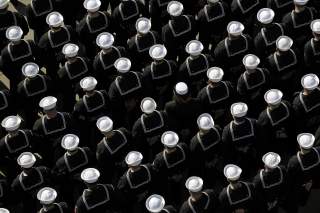 The United States could print more money and significantly increase the federal deficit to increase naval spending. In the short term, this might contribute to increased naval shipbuilding. But over the long term, the harm to the U.S. economy would more than offset any benefits that a larger navy might contribute to U.S. security in East Asia.

The United States could reallocate funding within the Department of Defense budget. Currently, the Navy, the Army and the Air Force receive approximately equal shares of the annual defense budget. This allocation does not reflect prioritization of the challenges to U.S. security, but rather the politics of defense spending. Reduced spending for the Army, which contributes little to U.S. maritime security in East Asia, would allow for a significant increase in Navy shipbuilding. Nonetheless, there is little resolve in either the Department of Defense or in Congress to reallocate funding within the military.

IN THE absence of a robust shipbuilding budget, the United States has relied on technology to offset China’s numerical advantage. U.S. development of advanced-technology weapons is impressive, including research on laser weapons, the rail gun, carrier-based attack and reconnaissance UAVs, underwater antisubmarine drones, and long-range antiship cruise missiles to contend with China’s ship-based antiship cruise missiles.

The United States still possesses considerable technological advantages over China, but the global diffusion of technology is very rapid. Over the next decades, the U.S. technological lead will narrow as China continues to modernize its fleet and it develops its own advanced weaponry, including attack and surveillance drones, laser weaponry and rail-gun technologies.

Moreover, China can continue to fund construction of large numbers of ships that will offset U.S. technological superiority. And because China’s port facilities are in the region, it requires fewer ships than the United States to maintain an equal number of ships in East Asian waters. In naval affairs, technology is important, but, in sufficient numbers, “quantity can have a quality all its own.” Thus, the U.S. Navy is developing new tactics to deal with size of the Chinese surface fleet, including “dispersed lethality” technologies.

Some advocates of a 355-ship navy have proposed that the U.S. Navy return to service ships currently mothballed. But these proposals simply reflect an interest in supporting a larger navy, rather than a thoughtful effort to contend with China and with the U.S. Navy’s budget problems. The Navy has opposed this plan. The funds for operating these older ships would cut into the operating budget for the Navy’s more modern vessels, thus diminishing the Navy’s combat capabilities.

Moreover, the Navy’s shipyards cannot adequately maintain the existing 272-ship navy, much less an expanded one. The condition of the shipyards is poor, and the number of deferred maintenance and restoration projects has grown by over 40 percent in the past five years. Due to maintenance and repair delays, the Navy has lost 1,300 days at sea for aircraft carriers and 12,500 days for submarines. A significant increase in shipyard budgets will have to accompany any increase in shipbuilding to make a larger navy effective.

Most important, even a 355-ship navy would likely be inadequate to contend with China’s shipbuilding program. China will simply not accept U.S. efforts to maintain the regional security order and U.S. maritime dominance. Chinese leaders have suggested that they are prepared to increase ship production should the United States challenge China’s growing naval presence in the South China Sea. Given China’s financial resources and its security interests, it will likely prefer to engage in a naval arms race rather than accept the status quo.

As a share of GDP, the U.S. defense budget is nearly 75 percent larger than China’s defense budget. In contrast to the United States, China’s social-welfare budget, including veterans’ benefits, is a minimal part of its national budget; it does not have a costly volunteer army; it can reallocate its defense spending to support its navy; and it is not involved in distant land wars that strain its military budget. Secretary of the Navy Richard V. Spencer has reported that “when it comes to China, the bottom line there is the checkbook,” and that China’s “open checkbook keeps me up at night.” In short, China is better positioned than the United States to race.

China’s improved capabilities have transformed Chinese policy. In just eighteen months, from late 2012 to early 2014, China carried out a series of challenges to the regional order. It established a regular coast guard presence within twelve miles of the Japanese-claimed Diaoyu/Senkaku Islands, established permanent occupation of the Philippine-claimed Scarborough Shoal, drilled for oil in the South China Sea, declared an air-defense identification zone over the East China Sea, challenged Vietnamese naval and fishing activities in disputed waters and created multiple crises in Sino-Vietnamese relations, began reclamation of submerged features in the South China Sea, and increased air and naval surveillance of U.S. military operations. Since then, China has built defense facilities on the reclaimed islands and maintained pressure on states that challenge Chinese territorial claims.

This record of Chinese strategic activism stands in stark contrast to the diplomacy of “peaceful rise.” It reflects the insistence and impatience of a new great power for greater security in a revised regional order.

America’s response to China’s strategic activism is the expected behavior of a declining and uncertain power. Concerned by China’s apparent lack of restraint and for the stability of U.S. alliances, the Obama administration “pivoted” to East Asia. In short order, it reached new defense agreements with the Philippines and South Korea and increased deployments in both countries, it deployed in South Korea its terminal high-altitude area defense system (THAAD), strengthened naval cooperation with Vietnam and gained access to Malaysian port facilities for surveillance of Chinese submarines. The U.S. Navy carried out highly publicized operations within twelve miles of Chinese reclaimed territories to signal its resolve to deter Chinese expansionism and its commitment to the defense of its allies. U.S. resistance to China’s rise was also reflected in Washington’s ill-advised opposition to China’s Asian Infrastructure Investment Bank.

The trend in the U.S.-Chinese military balance has contributed to heightened regional tension. In 2016, as the region awaited the Permanent Court of Arbitration’s ruling on China’s claims of an exclusive economic zone in the South China Sea, the United States adopted high-profile military measures to deter suspected Chinese plans to use force, should the court rule against China. At the same time, China feared that the Philippines, confident in U.S. support, would use a legal victory to challenge Chinese control over disputed waters. Greater U.S.-China tension in East Asia reflects the acceleration of the U.S.-China power transition.

THE OBAMA administration tried to strengthen U.S. alliances. But because the United States lacked the requisite military capabilities to offset Chinese naval modernization and to maintain dominance in China’s coastal waters, U.S. security partners have lacked confidence in the United States’ ability to balance the rise of China, and have developed greater security cooperation with China.

In July 2017, South Korean voters elected Moon Jae-in as president. During the campaign, Moon had pledged to stop U.S. deployment of THAAD in South Korea and restore good relations with China. After his inauguration, his first phone call as president was to Xi Jinping. To persuade China to end its sanctions and restore cooperation with South Korea, Seoul assured Beijing that it would not allow any additional deployments of THAAD, and that the existing THAAD systems would not be integrated into a U.S.–Japan–South Korea missile-defense system. It also vowed that it would not join in U.S.–Japan–South Korean alliance coordination, indicating that it would not join a U.S.-led Indo-Pacific coalition. This quid pro quo was the first China–South Korea security agreement that limited South Korean cooperation with the United States.

The new Philippine president, Rodrigo Duterte, similarly reconsidered his predecessor’s security policy. To establish its resolve to contend with China and organize a coalition against Chinese claims in the South China Sea, the Obama administration had encouraged President Benigno Aquino to bring the Sino-Philippine dispute over overlapping exclusive economic zones to the Permanent Court of Arbitration. In 2016, the court ruled in favor of the Philippines.