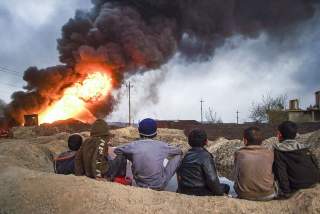 The Trump administration is stressing that America is out of the nation-building enterprise as it crafts its policy toward the Middle East. However, as the Islamic State is territorially defeated within Iraq, the future stability of the country rests on how effectively the Iraqi government—with U.S. and international assistance—can reconstruct and reintegrate the previously alienated Sunni population. Many areas will require concentrated focus, including security, governance, economic stabilization and infrastructure. Unfortunately, there is one overlooked issue that will determine the long-term security of the country: the status of its public-health system. If Iraq fails to address health security in the areas liberated from the Islamic State, then the country may once again plunge into chaos, making all of the military gains in vain.

Rebuilding the public-health and health-care-delivery systems must not be dismissed as a secondary focus as conditions in former Islamic State–held territories, and much of the Middle East indicate an incipient vulnerability to an epidemic. The entire region is plagued by preventable diseases, displaced persons and low-state expenditures on health care. An Ebola-esque outbreak spreading across the Middle East is not unrealistic.

An epidemic would stress Iraq to the breaking point; anything short of an immediate coordinated response by the Iraqi government under the current environment of sectarianism would reignite feelings of alienation and neglect. If the Iraqi government is unwilling—or unable—to provide the needed services, other groups will step in to fill that void. Terrorist organizations and non-state actors alike have utilized the provision of social services, including health care, to bolster their own legitimacy amongst the populace.

Mosul is in ruin. The city’s infrastructure has been destroyed by conflict-and-maintenance neglect alike under the Islamic State. Hospitals and schools are destroyed, houses are riddled with improvised explosive devices, the inhabitants are starving, vulnerable and displaced. Though the Islamic State claimed to provide “Muslims with extensive healthcare by running a host of medical facilities including hospitals and clinics in all major cities,” the health situation under the Islamic State was nonexistent for most inhabitants. Prevented from appropriate access to health care, children are undernourished, anemic and lack necessary vaccines. Chronic conditions plague adults who haven’t had access to treatment for years. The Iraqi Government, United Nations High Commissioner for Refugees, World Health Organization and other international organizations are providing health services to these liberated Iraqis—but these are only short-term fixes as health infrastructure must be rebuilt to inculcate long-term health security.

Iraq’s endemic-cholera problem showcases the inability of its health infrastructure to mitigate the risk of an easily preventable disease. The most recent outbreak in 2015 was fueled by many of the same causes of concerns that still exist, particularly the large numbers of internally displaced persons and refugees living under unsanitary conditions. Though the Iraqi Ministry of Health—along with the United Nations Children’s Emergency Fund and World Health Organization—was able to stop the outbreak through an oral-vaccination campaign, it failed to address the precursors that lead to the outbreak in the first place.

Iraq finds itself wedged up against a failed state in Syria, which has seen its health-care system depleted over the course of an intractable civil war. More importantly, the targeting of health personnel and services in Syrian cities by a myriad of actors has left essential welfare services nonexistent. With no end in sight, Syrian instability will cross the border into Iraq in the form of refugees, terrorists and diseases. Iraq does not have the infrastructure to prevent an epidemic though it may be able to contain one with international assistance. Yet the areas most destroyed and susceptible to an outbreak are the areas that were alienated by the central government prior to the rise of the Islamic State. If an outbreak does occur, these feelings of alienation will resurface.

Facing a variety of looming issues, the Iraqi central government has limited support for reforming the country’s public-health system. Additionally, as a long-term project, political infighting will derail efforts along the way. With the immense cost of the Islamic State campaign and the plunge of global oil prices in 2014, the Iraqi government cannot foot the bill for the billions of dollars it will cost to rebuild Mosul, leaving it to the international community, which historically has suffered from donor fatigue following a conflict.

The Iraqi government and United Nations Development Program in late April announced 202 projects to stabilize Nineveh Province and its capital in Mosul. These projects will “repair damaged water, sewage and electrical systems, rehabilitate education and health facilities, and boost the local economy by employing youth on work brigades to remove rubble, open transport routes and revitalize the city.” The problem is that one of the primary contributors to the program is the United States via the U.S. Agency for International Development. Under the current administration’s proposal to cut funds from the agency and similar agencies, long-term projects that are so fundamental to future Iraqi stability are in danger.

What Can Be Done

For the future stability of Iraq, the reconstruction and reintegration of Sunni areas is vital. This is not to undermine the importance of long-term security cooperation between Iraq and the United States after Mosul is completely retaken. Rather, this reconstruction needs to be a fundamental aspect of the continuing strategic relationship. The United States needs to be an active partner in the rebuilding of Mosul, both directly by contributing funds but also by gathering support from international partners, including Gulf partners. This will be a lengthy endeavor, but in the face of such dire consequences it needs to be done for as long as necessary.

As the Iraqi government looks to move beyond the Islamic State, it will need to protect and provide for the Iraqis who once resided in former Islamic State–held territories. This is not to take the onus off Iraq, but rather it will enable them to succeed. Without security, the health system cannot be rebuilt, but without rebuilding the health system, it sets the stage for the next terrorist organization to rise up as a challenger to the integrity of Iraq as a whole country. Mitigating the risk of an epidemic will be essential for not only the long-term political stability of Iraq, but for preventing a massive outbreak that could quickly destabilize the entire region.

Omar Mukhlis is a researcher in the Middle East Security Program at the Center for a New American Security.