Keeping Nukes Away From Madmen 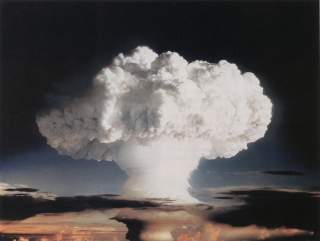 What keeps you up at night? For most of us, it’s thoughts of the future. We do our best to make responsible investments of our time, money and energy, and we hold ourselves to high personal standards. However, the restless nights return, and we find ourselves searching for new and different strategies that ensure a secure future for ourselves and our families.

It’s rare that rhetoric from Donald Trump—currently the leading contender for the Republican nomination for president—legitimately touches on a variant of the sleepless nights question, but he did so during the recent GOP debate in Las Vegas.

“The biggest problem this world has today,” he said, is “having some madman go out and get a nuclear weapon.”

We agree; and it’s also rare that Trump and Democratic presidential front-runner Hillary Clinton agree. But on this issue, they do. When asked at a recent debate what the greatest national security threat to the United States is, without hesitation, Clinton responded: “It has to be the continued threat from the spread of nuclear weapons; nuclear material that can fall into the wrong hands.”

With recent news of thwarted Moldovan nuclear smugglers, Trump and Clinton’s comments are pragmatic and an important acknowledgement of our continued nuclear insecurity.

Six years ago, a newly-elected President Barack Obama delivered a rousing address to a crowd in Prague. His message was clear: the existence of nuclear weapons and the vulnerability of the material used to create them pose an existential challenge to current and future generations. He announced a “new international effort to secure all vulnerable nuclear material. . . within four years,” which was endorsed by more than fifty world leaders at the first Nuclear Security Summit in April 2010.

This four-year objective was born from a deep concern regarding deficiencies in how radioactive materials are used, stored and transported around the world. The systems currently governing them are largely national, but the consequences of their misuse are global. President Obama and other world leaders have described spending sleepless nights contemplating how to prevent the devastating consequences of nuclear terrorism.

It may surprise many people to learn how underdeveloped the global nuclear security system is. Just this summer, the United States finally adopted the implementing legislations for two international treaties which the State Department describes as the “legal cornerstones of the global nuclear security architecture.” While this progress was good news, it took ten years to achieve. This pace is not well adapted to today’s global, dynamic threats.

The international nuclear security system must be proactive, not reactive. Today, there are no binding international standards, limited peer reviews, little information sharing and no mechanisms to ensure the continuous improvement of the system charged with keeping materials secure. The nuclear safety system has improved over time courtesy of the Convention on Nuclear Safety, but there has been no progress toward a comprehensive International Convention on Nuclear Security, despite the continued advocacy of experts.

The Nuclear Security Summits offer an opportunity for devising new solutions for strengthening global nuclear security measures. The past three summits have made important strides in consolidating and eliminating nuclear materials, focusing high-level political attention and initiating new partnerships. However, they have done little to address the structural and governance issues that have allowed vulnerabilities to exist—and which necessitated the initial launch, four-year effort and summit process.

With the summits expected to conclude in 2016, leaders must use this last opportunity to begin work on a more sustainable nuclear security framework. To assist these efforts, the international expert community has developed a simple list of “5 Priorities for Global Nuclear Security.” These priorities represent the consensus of dozens of experts from around the world regarding how the global nuclear security system must evolve. Crucially, the system needs to become more comprehensive, open, rigorous and sustainable, and involve the reduction of nuclear material stockpiles.

It has proven difficult to rally support for the type of global standards that characterize other transnational regimes. Historically, nuclear security has been considered a domestic responsibility of governments, with a strong emphasis on secrecy. However, we now exist in a globalized world. Nuclear power is rapidly expanding to new regions, and radiological materials are widely used in medical, industrial and agricultural sectors. There is an increased responsibility for states to cooperate on this issue, as insecure materials in one country can gravely affect others. Nuclear security can be strengthened while respecting states’ rights and protecting sensitive data.

After three heads of states summits in six years—and seventy years since the birth of the nuclear age—the global nuclear security system remains woefully underdeveloped. Resistance to genuine change is no longer acceptable, and leaders must recognize the potential consequences of inaction. The legacy of the summits should be forward looking, not merely completion of a decades old agenda. Its outcomes must be crafted with a vision for the future that rises to emerging challenges and supports continuous improvement. If not, the sleepless nights of our leaders will be justified, and we can expect the same old concerns from presidential candidates in the 2020 primaries.

Ms. Jenna Parker is the Nuclear Security Analyst at the Partnership for Global Security. Her primary research focuses on global nuclear security developments in key regions, the expansion of nuclear energy and governance policies and the outcomes of the Nuclear Security Summit process.