Keeping Russia's Missiles Away from Europe 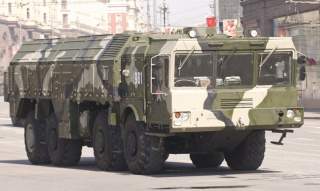 In recent months, NATO-Russian tensions in Europe have escalated beyond a war of words to reciprocal and provocative movements of military forces including troops, armored forces, missiles, aircraft and warships. An example of this dangerous activity occurred in mid-September, 2015. According to media reports, the analysis of intercepted transmissions by the Royal Air Force confirmed that Russian Tupolev Tu-160 bombers, known by NATO as "Blackjacks" had entered British airspace and began the sequence to arm nuclear weapons as part of their provocative training exercise. Such cycles of hostile rhetoric and increased tempo of military operations carry a great risk of misperception and miscalculation that can spark unintended war with horrific consequences for both sides.

U.S., European and Russian citizens must demand that their leaders avoid a return to these Cold War tactics and once again make the prospect of war in central Europe a remote possibility. The tit-for-tat ratcheting up of tensions and mutual blame game are tired steps down an old road followed far too often to disaster, and do not represent the caliber of leadership Europeans and Russians deserve.

In the latest round of such irresponsible behavior, on September 23, Russian Federation Council Defense and Security Committee chairman Viktor Ozerov claimed that NATO deployment of the accurate, modernized B-61 Mod-12 nuclear bomb could push Russia into leaving the Intermediate Nuclear Forces (INF) Treaty. Well, guess what: The U.S. State Department already declared in July 2014 and June 2015 that Russia violated its obligations under the INF treaty by continuing development and flight-testing of a new ground-launched cruise missile (GLCM) with a range exceeding 500 kilometers.

Ronald Reagan and Mikhail Gorbachev signed the INF Treaty back in December 1987. It banned all U.S. and Soviet ground-launched ballistic and cruise missiles with ranges between 500 and 5,500 kilometers. It entered into force in June 1988. Three years later, the two countries had destroyed some 2,600 missiles—the first time ever that an entire class of nuclear arms had been eliminated.

The most significant achievement of this treaty was to eliminate nuclear weapons that, because of their short flight times, made early warning problematic and compressed the time scale in which leaders must decide the fate of millions of citizens. Such conditions raise the risk of mistakes or preemptive attacks. The danger of returning to such dire and unacceptable tensions in Europe hasn’t been seen since the early 1980s.

Despite these current negative trends, there are opportunities for renewed nuclear diplomacy in Europe. Just as the NATO allies fear a new Russian nuclear-armed ground-launched cruise missile, Russia fears the planned NATO deployment of the B61–Mod12 nuclear smart bomb on a new generation of stealthy aircraft. Such aircraft could fly from NATO bases in Lithuania, Estonia and Poland to Russia’s largest cities in 15-20 minutes—not that much longer than the flight time of the missiles eliminated by the INF treaty.

Plans call for approximately 180 U.S. B-61-Mod12 bombs to be shared by Belgium, Germany, Italy, the Netherlands and Turkey, beginning in 2020. The new Russian cruise missile could probably not be deployed in significant numbers until approximately the same time frame. It is time to seek formal negotiations on verifiable reductions in these theater (nonstrategic) nuclear weapons, as was required by the 2010 U.S. Congressional language approving the New START treaty.

In exchange for cancelling the deployment of the B61-Mod 12 and removing the older U.S. nuclear bombs from all NATO countries, Russia could be required to cancel the new cruise missile and decrease its stockpile of approximately 1,000-2,000 nonstrategic nuclear warheads and store the remaining weapons in bunkers far from its western border with Europe. It should also pledge never to deploy nuclear weapons to Crimea and Kaliningrad, territories it controls on the borders of Europe.