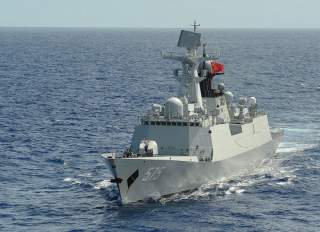 In what follows, I offer my assessment of the current situation in the South China Sea, how the U.S. government should understand the situation, and how it may best address the situation.

A major Chinese narrative regarding the South China Sea is one of unreciprocated restraint. But Chinese leaders have clearly had an ambitious long-term vision of some sort, backed by years of island seizures, themselves based on longstanding claims encapsulated in an ambiguous “nine-dash line” enclosing virtually all of the South China Sea.

In 2014, China greatly accelerated what had long been a very modest process of “island building,” developing land features in the Spratlys and Paracels with a scale and sophistication that its neighbors simply cannot match, even collectively over time.

But it’s what China’s constructing atop these augmented features that most concerns its neighbors and the United States: militarily relevant facilities, including at least two 3,000-meter runways capable of serving a wide range of military aircraft, that could allow Beijing to exert increasing leverage over the South China Sea. No other South China Sea claimant enjoys even one runway of this caliber on any of the features it occupies.

One logical application for China’s current activities: to support a South China Sea Air Defense Identification Zone (ADIZ) like the one Beijing announced over the East China Sea in November 2013. The way in which China announced its East China Sea ADIZ suggests that it’s reserving the “right” to treat international airspace beyond 12 nautical miles as “territorial airspace” in important respects.

As bad as things are already, they could get worse—particularly if American attention and resolve are in question. Maritime militia and Coast Guard forces will be forward deployed. They might even be used to envelop disputed features as part of a “Cabbage Strategy” that dares the U.S. military to use force against non-military personnel. Such paramilitary forces would be supported by a deterrent backstop that includes both China’s navy and its “anti-navy” of land-based anti-access/area denial (A2/AD), or “counter-intervention,” forces—collectively deploying the world’s largest arsenal of ballistic and cruise missiles.

·       implicitly or explicitly threaten the use of force to resolve disputes

That’s why the United States now needs to adjust thinking and policy to stabilize the situation and balance against the prospect of negative Chinese behavior and influence.

As Peter Dutton has long emphasized, the way forward for the United States is clear: even as China advances, we cannot retreat. Together with the East China Sea and the Yellow Sea, the South China Sea is a vital part of the global commons, on which the international system depends to operate effectively and equitably. Half of global commerce and 90 percent of regional energy imports transit the South China Sea alone. We cannot allow Beijing to carve out within these international waters and the airspace above them a zone of exceptionalism in which its neighbors face bullying without recourse and vital global rules and norms are subordinated to its parochial priorities.

Instead, we must maintain the national will and force structure to continue to operate in, under, and over the South China, East China, and Yellow Seas; and preserve them as peaceful parts of the global commons for all to use freely without fear.

There, given China’s growing power and our own sustained power and resolve, we must accept a zone of managed strategic friction and contestation. This includes accepting the fundamental reality that we will not roll back China’s existing occupation of islands and other features, just as we will not accept its rolling back its neighbors’ own occupation. Most fundamentally, the United States must preserve peace and a stable status quo in a vital yet vulnerable region that remains haunted by history.

We need to pursue a form of great power relations that I term “competitive coexistence.” It is not a comprehensive rivalry, as between Washington and Moscow during the Cold War. Rather, it has specific competitive aspects that we should not exacerbate gratuitously, yet must not shy away from. Beijing’s current leadership is clearly comfortable with a certain level of tension; we must be too.

The above paradigm has important implications for both U.S. rhetoric and policy. First, American officials must recognize what their Chinese counterparts have long understood: words matter. The United States must not appear to embrace Chinese policy concepts or formulations that make us appear to fear tension, or to be willing to yield to Beijing’s principled policy positions in order to mitigate it. Such optics would only encourage Chinese testing and assertiveness vis-à-vis Washington and its regional allies. Accordingly, two particularly problematic formulations favored by Beijing (and their variants) must be banished from the lexicon of American official discourse:

As invoked by none other than Xi Jinping himself to pressure American counterparts, the idea of the imperative to avoid a “Thucydides Trap” represents a misapplication of history. It falsely implies that only by taking drastic measures can the United States and China avoid previous patterns of ruinous conflict between an established power and a rising power.

As Thomas Christensen argues persuasively, however, the evolution of nuclear weapons, international institutions, globalization, financial markets, and transnational production chains have made the world a very different place than it was just over a century ago in 1914 when the Great War erupted. Washington and Beijing certainly face friction, tensions, and even the possibility of future crises of some severity. But significant shared interests—economic and otherwise—as well as collective reliance on a dynamic international system, together with mutual deterrence, will enable them to avoid war. Both sides are restrained by these strong positive and negative incentives; it is not necessary for Washington to shoulder the burden of restraint alone. Instead, raising false hopes in Beijing only to have them dashed disappointingly is significantly more dangerous than being clear and firm from the start. U.S. policymakers must thus consistently avoid embracing flawed historical analogies that encourage unrealistic expectations on Beijing’s part.

To set the right tone and expectations while safeguarding American interests, the Chinese policy bumper sticker that flows from falling for the “Thucydides Trap” must likewise be rejected. As originated and promoted by Beijing, the concept of “New-Type Great Power Relations” (and its variants) is invoked to imply that Washington must respect China’s “core interests” (including, apparently, in the South China Sea) while not committing Beijing to corresponding accommodation in return.

Instead, the United States should proactively and consistently promote its own policy formulations. Robert Zoellick’s “responsible stakeholder” concept is an excellent example, and it was a serious mistake for the Obama administration to cede the field in this competition of ideas. To the extent that Beijing opposes the idea of responsibilities being thrust upon it, I propose that “strategic stakeholder” might be a better phrase. In any case, each side is free to employ its own concepts and rhetoric. But, at a minimum, the policy formulations that we ourselves embrace should at least meet the standard of the Hippocratic Oath of international relations: “first, do no harm.” That typically means using our own wording unless there is a compelling reason to do otherwise.

As for substantive efforts, we must develop and maintain a force structure and set of supporting policies and partnerships geared to ensuring access despite Chinese development of counter-intervention capabilities. We must make particular effort to preserve the significant American advantage in undersea warfare by emphasizing nuclear-powered attack submarines (SSNs) and offensive naval mines. If we’re not building at least two Virginia-class SSNs per year, we’re not being serious—and regional allies, China, and other partners will see that clearly. Three a year would be even better, and I believe we can and should get there soon.

We must also take a page from China’s counter-intervention playbook and further prioritize anti-ship cruise missiles (ASCMs). By 2020, China is on track to have quantitative parity or better in surface-to-air missiles (SAMs) and ASCMs, parity in missile launch cells, and quantitative inferiority only in multi-mission land-attack cruise missiles (LACMs). Unless this very real missile gap can be filled credibly, China is poised to “outstick” the U.S. Navy by 2020 by deploying greater quantities of missiles with greater ranges than those of the U.S. ship-based systems able to defend against them.

Retention of U.S. Navy superiority hinges on next-generation long-range ASCMs, specifically the Long-Range Anti-Ship Missile (LRASM) and the vertical launch system-compatible Naval Strike Missile (NSM) variant. These remain “paper missiles,” as yet un-fielded on U.S. Navy surface combatants. The NSM represents the extraordinary case of the United States looking to Norway (in partnership with Raytheon) to supply a key weapons system that American industry itself should have been able to produce on favorable terms years ago. Additionally, new U.S. ASCMs may be unable to target effectively under contested counter-intervention conditions. Failing to fill this gap would further imperil America’s ability to generate and maintain sea control in the Western Pacific.