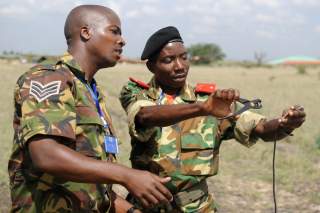 As Kenya inches dangerously close to shutting down the world’s largest refugee camp in Dabaab, the announced closure masks a calculated, yet disastrous parlay of legitimate domestic terrorism concerns for an expedient, yet flawed, solution that is unlikely to resolve the country’s security challenges. But as insecurity evolves into a bargaining currency for the governing elite, the United States’ partnership with an arguably capable East African partner will increasingly fall into worrying scrutiny.

Kenya is one of the largest recipients of U.S. security assistance in sub-Saharan Africa. Through both State and Defense Department accounts, the Kenyan government has received over $141 million in security assistance funds since 2010­—an amount that rose to $100 million in 2015 alone. Most of this financing is directed towards counterterrorism support, but despite substantial increases in training and equipment, concerns abound with woeful professionalism in Kenya’s military and security forces. Both security institutions are hampered by persistent allegations of human rights violations and entrenched corruption—both to the detriment of Kenya’s national security, and the general well-being of Kenya’s Somali population.

In the past decade, the United States has helped bolster Kenya’s domestic security and military capacity, assisting in the development of the National Intelligence Service­—Kenya’s domestic and foreign intelligence service—the General Service Unit, a paramilitary reserve unit primarily deployed to respond to civil disorders, and the Anti-Terror Police Unit (ATPU)—a specialized police unit tasked with counterterror responses. These domestic security and military services serve at the forefront of Kenya’s counterterrorism efforts against a capable enemy in Al Shabaab.

Elsewhere, the United States has been instrumental in resolving the challenges of cross-agency coordination and cooperation—a handicap that led to the deficient response to the Westgate Mall attack in 2013. Indeed, since 2005, the State Department has dedicated funds towards improving coordination within the country’s intelligence and domestic security services. But despite increased financial assistance and training, Kenya’s overall security structure lags in overall professionalism, posing a worrisome challenge to the country’s national security.

Certainly, the Kenyan government is pivotal partner and contributor to U.S. counterterrorism efforts in the horn of Africa. But as transnational terrorism threats in East Africa have broadened, Kenya’s formally restrained foreign and domestic policy has acquired an increasingly hawkish fervor. In particular, the Kenyan government has narrowed its security aperture on the Muslim and Somali communities residing within its borders—policing Somali enclaves such as Eastleigh with draconian tactics unlikely to resolve the attendant concerns with domestic radicalization and terrorism.

Elsewhere, Kenya’s counterterrorism footprint has expanded through the military’s participation in the African Union–led mission against Al Shabaab inside Somalia, AMISOM. This effort initially weakened Al Shabaab’s overall potency, though the group maintains a couple insurgent reach in both Kenya and Somalia. Indeed, since Kenya joined the AMISOM-led campaign against Al Shabaab in 2011, Al Shabaab attacks inside the country have intensified across the country with escalating confidence.

The government’s response to these terrorist attacks has been particularly harsh within the Somali community. In the aftermath of terrorist attacks over the past several years, both domestic security forces have frequently targeted Muslim and Somali communities, and have been accused of employing torture, extrajudicial killings, arbitrary detentions, and forced deportations or disappearances as commonplace response tactics.

In a country that ranks 145 out of 175 in a global corruption index compiled by Transparency International, the police are locally perceived as the prime contributors to institutional corruption within the internal security services. Though the military is commonly lauded for its abstention from the political process—a rarity in African politics and corruption allegations nonetheless abound. Recent allegations of an ongoing criminal enterprise involving the Kenyan military and its participation in an illicit sugar and charcoal trade network—indirectly profiting Al Shabaab in Somalia– further outlines the corruption challenge within Kenya’s security establishment.

These military scandals notwithstanding, it is the Kenyan police on which public suspicion of corruption focuses. Everyday citizens harbor an unfavorable perception of the police, and the institution is widely considered as ineffective, corrupt, and a vehicle of state repression. The entrenchment of extrajudicial militias and criminal gangs, abetted, and at times utilized by political elites, undergirds the great degree of suspicion that undermines public trust in Kenya’s law enforcement services.

Analysts contend that this environment of impunity facilitates the expansion of violent militancy among ostracized Kenyan minorities (both ethnic and religious.) That a report released by the Kenya National Human Rights Commission—an autonomous, constitutionally-formed investigative body tasked with monitoring human rights violations­—cited both police and immigration officials as complicit in a bribery scheme that facilitated safe passage of suspected criminals and militants across the Kenya–Somali border underscores the challenges facing Kenya’s security sector.

Ultimately, Al Shabaab’s ability to wage a costly terrorism campaign inside Kenya aids its ambitions inside Somalia. And as long as professionalism within Kenya’s security establishment lags and the propensity to criminalize Kenya’s Somali population remains, Al Shabaab will benefit from a reservoir of disaffected and aggrieved Somalis, vulnerable to recruitment and radicalization. Above all, unless the United States is willing to condition its assistance to improvements in human-rights conduct, Kenya’s ability to defend and deter Al Shabaab’s attacks within its borders will remain inadequate.

Peter Kirechu is an independent security assistance and counterterrorism analyst focused on the Middle East, North and Eastern Africa. He tweets at @Peterkirechu.