Kerry Sets A Dangerous Precedent With Letter to Iran 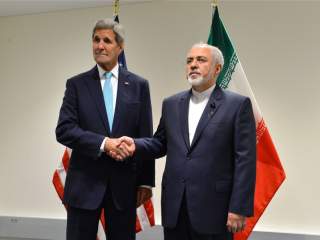 Buried in Congress’s big new budget deal was a controversial alteration to the Visa Waiver Program, a measure that allows travelers from many European countries to come to the United States without a visa. (Americans get the same privilege in return.) The reform prevents citizens of and recent visitors to Syria—and other countries determined to be sponsors of terrorism—from participating in the program. As I wrote last week, the measure has been heavily criticized due to the risk that the other countries that participate in the program would impose the same restrictions on Americans. Syrian American, Iraqi American, Sudanese American and Iranian American travelers would be, in the words of one advocacy group, “second class citizens.”

Many of the same critics have argued that the visa reform violates last July’s nuclear deal with Iran, under which the United States committed to “refrain from any policy specifically intended to directly and adversely affect the normalisation of trade and economic relations with Iran inconsistent with their commitments not to undermine the [deal’s] successful implementation.” In other words, we can’t intentionally sabotage the restoration of trade with Iran; this bill, they charge, does that, as it imposes new hurdles on businesspeople who’d like to operate in both countries. Some Iranian politicians and apparently a number of European diplomats have advanced this view.

The Obama administration responded promptly to these concerns: shortly after the bill’s passage, Secretary of State John Kerry wrote a letter to Iranian foreign minister Mohammad Javad Zarif which stated that the administration would implement the reform “so as not to interfere with legitimate business interests of Iran.” Kerry ticked off a number of options the administration had available to soften the law’s impact and noted that the changes can also be waived.

This has drawn heavy criticism from Congressional Republicans like House Foreign Affairs Committee chair Ed Royce (R-CA), who accused the administration of “bending over backwards to try to placate the Iranian regime.” Royce couched his charge in a broader critique of the administration’s seeming reluctance to take firm measures in response to Iran’s recent ballistic missile tests, its ties to terrorism and its imprisonment of a number of American citizens on bogus charges. Royce’s counterpart in the Senate, Foreign Relations Committee chair Bob Corker (R-TN), raised similar complaints in a hearing last week, suggesting that the Obama team has been too reluctant to hold Iran to account. Part of this hesitation may be an attempt to avoid emboldening Iranian hardliners ahead of the momentous legislative elections two months from now. As well, the administration must be looking ahead to Implementation Day, a critical waypoint in the Iran nuclear deal in which sanctions will begin coming off and Iran’s major nuclear commitments are in full effect. Iranian president Hassan Rouhani has said Implementation Day will come in the current Iranian month, meaning before the end of January. So it’s hardly mad for the administration to be cautious these days, and Kerry’s letter was likely intended to forestall a destructive confrontation over a peripheral point.

Yet that doesn’t mean Kerry’s letter was the right approach—indeed, it was unseemly. The signal itself could have been sent differently, for example: the same letter could have been sent to all of the members of the Joint Commission, a multilateral body charged with resolving disputes over the deal. (Iran is among its members.) It could have been released as a statement from the State Department, addressed to nobody. It could have been communicated informally to the Iranians, not in writing. Kerry or a spokesperson could even have simply told a journalist about the administration’s intentions. Instead, we are given the appearance of a Secretary of State preemptively defending the Islamic Republic from U.S. legislators.

The content of the statement is also questionable. Iran was included in the visa restrictions because it is a state sponsor of terrorism. The United States rightly refused to soften its response to Iranian terror in return for Iranian concessions in the nuclear deal, and the nuclear deal does not prevent new measures intended to hinder Iran-backed terrorism. Tehran’s sponsorship of terrorism may hinder its legitimate business interests, but that is not a problem addressed in the nuclear deal and it is certainly not a burden that Washington is obliged to ease. And while the visa-waiver reform is not likely to be very effective in preventing Iranian terrorism against the United States (for starters, Lebanon, home to Iran’s proxy Hezbollah, is not on the list), the United States is within its rights as a sovereign nation to impose a higher level of scrutiny on new arrivals who’ve traveled to countries that help terrorists, regardless of how effective those measures may be. Yet sovereignty gets scarcely a nod from Kerry; the fear of Iranian umbrage rules the day.

The visa waiver brouhaha is symptomatic of broader challenges the United States faces in carrying out the nuclear deal. We do not want to give up our power to respond to concerning Iranian behavior in areas outside the nuclear deal, yet we also do not want the deal itself to break down, with Iran going back to its most concerning forms of nuclear research. The Iranians weren’t crazy to fear that hawks in Congress would reimpose the nuclear sanctions on a different basis - perhaps via a newly discovered enthusiasm for Iranian human rights. The deal has measures to prevent our reneging, but they aren’t crystal clear: much is left to intent, and thus much is left to interpretation. We cannot send IAEA inspectors into a Congressman’s head to see what his real intentions were in passing the visa-waiver reform. If we were in the place of the Iranians, we’d probably share many of their concerns.

But it is these questions of intent and interpretation that make our actions in the early months of the nuclear deal so important. The norms of interpretation that are emerging now will be hard to shake in the future. And the norm is that Iranian misbehavior in nonnuclear areas will be handled gently, for fear of harming the nuclear deal; the norm is that Iranian perspectives on the deal’s interpretation will be given heavy weight, particularly if they can get the Europeans on their side; the norm is that, contrary to what our negotiators worked so hard to avoid, Iranian nuclear concessions will gain American concessions beyond the nuclear sphere. The administration’s apparent motives are understandable—with Iran already heavily sanctioned and isolated, the impact of new sanctions designations over the recent missile launch or new restrictions on Iranian visas is likely to be small compared to the risk of Iran reneging on the nuclear deal. Future administrations, hands tied by the norms such thinking will create, may wish we’d guarded our sovereign rights more jealously. Iran’s American hostages may already feel the same.