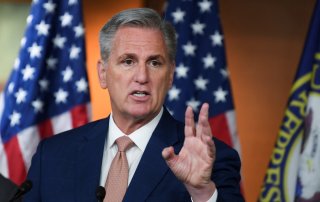 House Minority Leader Kevin McCarthy (R-CA) signaled last week that a GOP majority in the lower chamber would stop, or at the very least, scrutinize, the substantial flow of aid to Ukraine from America. “I think people are gonna be sitting in a recession and they’re not going to write a blank check to Ukraine … Ukraine is important, but at the same time it can’t be the only thing they [the Biden administration] do,” McCarthy said. Along with the looming post-midterm immigration battle, pushing back on the Biden administration’s proxy war in Ukraine provides the GOP with an opportunity to demonstrate that its commitment to an America First foreign policy goes beyond rhetorical gestures.

McCarthy did not offer specifics about how a future GOP majority would change congressional policy toward Ukraine, but his message hinted at a fundamental truth: the first duty of U.S. political leaders is to protect and promote the interests of their constituents. To date, both parties have failed to do this with respect to the Russo-Ukrainian War.

U.S. national interests in Ukraine can be distilled into three core objectives. As international security scholar Joshua Shifrinson outlined in an analysis for Defense Priorities, these include: preventing an escalation of the conflict that might lead to a direct confrontation between the United States and Russia, avoiding the total deterioration of bilateral U.S.-Russia relations, and limiting the economic fallout from the war.

So far, the Biden administration, with the near-total acquiescence of Congress, has failed to secure the last two objectives. More concerning, Washington’s obstinate refusal to negotiate with Russia to end the conflict, or at least enact a ceasefire, on the disingenuous basis that only Kyiv has the agency to do so, is bringing the world closer to nuclear conflict.

A GOP takeover of the House could potentially affect the Biden administration’s calculus on pursuing diplomacy with Moscow. If the GOP decided to significantly reduce lethal aid packages to Kyiv, the White House could react by opening direct diplomatic channels with Moscow while Ukraine still holds the initiative on the battlefield. Of course, a smarter strategy would be to do that now before the impact of the Russian troop mobilization is felt and while time and momentum are still on Ukraine’s side.

Military analysts have also warned that U.S. aid to Ukraine is depleting some of the Defense Department’s stockpiles. The Biden administration has made multi-year investments with U.S. defense contractors to produce and transfer defense capabilities to Ukraine, but they may not reach the battlefield in time to make a difference.

Congressional advocates of foreign policy restraint are vastly outnumbered by their hawkish colleagues. But a changing of the guard means that the party’s right flank, particularly in the Freedom Caucus, will be looking to hold McCarthy’s feet to the fire if he shifts resources away from the conference’s chief domestic priorities.

Pre-midterm polls show that Americans don’t consider Ukraine a top political priority and want NATO allies to pick up a larger share of the burden when it comes to supporting Kyiv through financial and military aid. A September poll conducted by YouGov and Concerned Veterans for America found that a combined 85 percent of Americans said Washington should send either the same (51 percent) or less (34 percent) amount of military and economic assistance to Ukraine than wealthy European countries. Currently, this is not the case. According to the Kiel Institute for the World Economy, from January 24 to October 3, the United States committed $52.7 billion in government support to Ukraine. By contrast, European Union (EU) members and institutions only contributed $30.1 billion. The bloc’s leaders, Germany and France, have respectively committed a meager $1.2 billion and $322 million in military aid.

This imbalance is a direct result of the contradictory goals U.S. policymakers have set for the transatlantic alliance. U.S. presidents going back to the Cold War have complained about the costs and incentives associated with assuming responsibility for European security. Yet, at the same time, U.S. policymakers have also stifled European attempts to pursue strategic autonomy, or independent and self-sufficient defense capabilities. Since February, the United States has stationed an additional 20,000 forces in Europe, raising the total number of U.S. servicemembers on the continent to more than 100,000. Rather than encourage European allies to make serious long-term commitments to their defense and evolve into a capable geopolitical actor, the Pentagon doubled down on strategic overstretch and picked up the tab again.

The choice facing a future GOP House majority is clear: either support a policy that is raising the prospect of a confrontation between the world’s preeminent nuclear powers while risking strategic overstretch or prioritize U.S. national interests and push treaty allies to contribute more. McCarthy seems attuned to the obvious contradiction of an America First platform that would commit itself to the former.