Kexit: How Kurdish Independence Could Reshape the Middle East 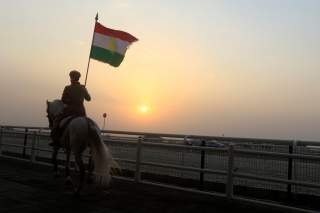 In this context, viewing the Turkey-Kurdish issue through an Iranian prism, who will make a more effective long-term ally against Iran?

Pushing back on Iran and effectively addressing the deficiencies of the nuclear deal should be Team Trump’s chief Middle East focus. It is Iran, not ISIS, that presents the far greater long-term strategic threat to the United States and its allies. America’s ability to achieve that aim will be shaped by Donald Trump’s foreign-policy ideology. Many of those who were behind the idea of “principled realism” have departed the administration (or have been given the proverbial boot) since he first articulated the broad strokes of what that phrase means in action.

Trump may not want to tempt the Pottery Barn “you break it, you own it” rule because it’s a slippery slope towards nation building. That could explain his hands-off approach to Syria, which is where many of the region’s challenges intersect. But without active American leadership and crisis management, the region defaults to open conflict and war—fertile ground for the rise of terrorists amidst chemical and biological weapons, with the added danger of nuclear proliferation presented by the Iranian challenge.

A Middle East foreign policy designed to return Syria and Iraq to pre-2011 conditions will simply reset the circumstances that were the root cause of the Arab upheaval. Even worse, it leaves the two countries under Iran’s control and hands the regime in Tehran the strategic prize it has sought since the 1979 revolution.

As the old saying goes, “you may not be interested in war, but war is interested in you.” The same can be said about U.S. interests in the Middle East. Likewise, the Trump administration may not yet have a strategy to handle Iran or deal with its expansion in Syria and Iraq, but Iran does, and it is implementing that plan.

What that means for the current Kurdish question and American policymakers is that at the very least, Washington should realize that Syria and Iraq are already failed states. Why should the Kurdish people of Iraq trust the central government if the Sunni Arabs in the western Anbar province don’t trust it? In Syria, hopefully Team Trump understands there is a reason that America’s Kurdish YPG allies were dedicated to the defeat of ISIS but not the downfall of Assad: It is because they are willing to cut a deal with the Syrian dictator, especially if they have no other options. Abandoning them after the defeat of ISIS in Syria will turn that territory over to Assad. Effectively, that means substituting the Islamic Republic of Iran in place of the Islamic State.

Matthew RJ Brodsky is a senior fellow at the Security Studies Group in Washington, DC, and a Senior Middle East Analyst at Wikistrat. He can be followed on Twitter: @RJBrodsky.

Image: A Kurdish man rides a horse during a march supporting the coming referendum in Erbil, Iraq September 21, 2017. REUTERS/Alaa Al-Marjani