Keys to the Kingdom: Who Will Govern the UK? 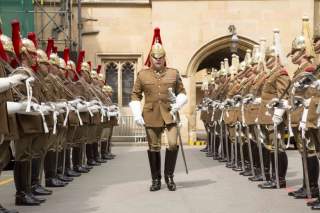 Voters in the United Kingdom, who go to the polls on May 7, could well wake the next morning to discover a constitutional quagmire unfolding. For although it is sometimes touted as a model of continuity and stability in the democratic world, the UK system of government is actually highly susceptible to confusion—especially owing to its many uncodified constitutional rules. And next month, once the country’s General Election results have been tallied, the political conditions might just align to cause some serious turmoil.

If the opinion polls are to be believed, then the Conservatives and Labour—Britain’s two main political parties—look likely to grab just over two-thirds of the popular vote between them. Neither party is on course to achieve an overall majority in the House of Commons. Meanwhile, the traditional third party in UK politics, the Liberal Democrats, is set to slump to single digits for the first time in decades, possibly losing up to 70 percent of their sitting MPs. Insurgent forces, such as the UK Independence Party (which came out on top in UK-wide elections to the European Parliament last year) and the Scottish National Party (which is slated to gain dozens of seats in Scotland) are poised to benefit from disillusionment with the established parties.

Because no single party will have an overall majority in the Commons, the country’s fate will hinge upon which party leader can assemble a large enough coalition to govern. On May 8, then, David Cameron and Ed Miliband—the two candidates for prime minister from the Conservative and Labour parties, respectively—can expect to spend their day on the telephone with leaders of the UK’s minor parties, either offering them positions in a formal coalition government or pleading for parliamentary support on an informal basis.

More likely than not, the Conservatives will look to the centrist Liberal Democrats (with whom they currently sit in coalition government), UKIP and/or the unionist Northern Irish parties for assistance. Ed Miliband will be forced to find common ground with some combination of the Liberal Democrats, Greens (who currently have just one MP) and the various left-wing nationalist parties: the SNP, Plaid Cymru (“the Party of Wales”) and Northern Ireland’s SDLP (and even, some are suggesting, Sinn Fein).

All of this is rudimentary stuff. In a parliamentary system, no government can survive without commanding the confidence of the lower house. The question of “who governs?” is not answered with reference to which single party wins a plurality of seats at any given election, but rather which combination of parties can congeal to command a reliable majority in the Commons. Everybody knows this—or should.

However, there has been a lack of understanding of this basic constitutional principle in recent weeks. Instead, pundits and politicians alike have taken to claiming that whichever party wins the most seats on May 7 will have “won” the election, and thus should have first—perhaps even sole—refusal at forming a government. This is, at best, a flagrant misunderstanding of the UK system and, at worst, a cynical attempt to exploit the uncodified nature of the constitution for short-term partisan gain.

In the aftermath of what promises to be a messy and indecisive general election, it will be crucial that the UK constitution is treated with the respect that it deserves and, indeed, requires if it is to function as an effective system of rules. For example, if the Conservatives emerge as the largest political party, but Labour’s Ed Miliband is the only candidate for prime minister able to form a majority government (or a viable minority government), then the election result needs to be called honestly and in keeping with parliamentary theory and precedent: as a Conservative loss. The mandate to govern will rest with whoever can form a government, not with the largest single party.

The UK constitution has allowed for the second-largest party to form a government before, of course, without the sky falling down. In 1923, Labour formed a minority government at Westminster, despite coming second in the general election of that year. It was right and proper that they did so because the largest party of the day, the Conservatives, lacked the confidence of the House (especially the still-sizable Liberal Party) and so were unable to govern. Similarly, openDemocracy’s Adam Ramsay has noted how, after the 1955 election, the Conservative government of Anthony Eden was technically a coalition of parties—the Conservatives, the Unionists, renegade Liberal MPs and so on—and that Labour was, in fact, the largest single party represented in the House of Commons.

When it comes to fundamentals, the UK constitution of 2015 is little different from that of 1950 or 1923. Now, as then, the goal for any aspiring prime minister is to be able to assemble a parliamentary majority to win key votes—pure and simple. All that has changed is public—and even elite-level—understanding of (and deference to) the country’s established constitutional rules. In one astonishing example, former prime minister Gordon Brown even wrote in the The Guardian that the doctrine of parliamentary sovereignty—perhaps the single most important cornerstone of the UK constitution—was nothing more than a “fiction.”

Given such a high level of tolerance for bashing the UK’s constitutional principles, it is small wonder that confusion now reigns over who will govern in the event of a hung parliament. But all constitutions—even uncodified ones—need to be understood and respected if they are to bring order to a country. Sooner or later, then, Britain must relearn to love and trust in its once vaunted system of government if politics is to take place according to any semblance of predictability. The alternative is to operate without any fixed rules at all.