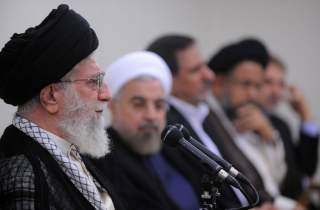 Iran’s Supreme Leader Ayatollah Ali Khamenei is determined to resolve the dispute over Iran’s nuclear program and improve Iran’s economy. He’s relying on President Hassan Rouhani to make it happen. But Khamenei is unwilling to allow the necessary social and political background for achieving his goals—a democratic political system that respects human rights of the Iranian people.

With the election of Rouhani in June 2013, and given the promises that he had made during his campaign, a hopeful environment began to develop in Iran. Most people were waiting impatiently for dramatic changes. But Khamenei has resisted major changes in the domestic affairs. Instead, he is determined to show that, when it comes to opening up the political system and granting people their rights, Rouhani’s election has not changed anything. The result is that he and Rouhani have been waging a cultural war against each other.

Khamenei is determined to prevent any reforms of the type that former President Mohammad Khatami tried to put in place. More importantly, he remains terrified by the Green Movement. He believes that the Movement was “sedition,” and used this to crack down on the dissidents and supporters of the Movement.

When the violent crackdown on the Green Movement began, hundreds of political activists, journalists, human rights advocates and others either immigrated to other countries or were simply forced to flee Iran. Rouhani’s election and his invitation to the exiles to return home created some hope. But Khamenei does not want them to return to Iran, and to achieve this goal he has taken a four-pronged offensive.

One is the announcement by the judiciary, controlled by him, that if the exiles return they will be put on trial and imprisoned. Second, and to emphasize the first, two people were recently incarcerated. One was journalist Saraj Mirdamadi who returned to Iran, was arrested on May 20 and after a show trial was given a sentence of six years in prison. The second one was Sajedeh Arab Sorkhi, whose Feyzollah Arab Sorkhi was active in the Green Movement and was jailed for 50 months. The young Arab Sorkhi was put on trial in absentia and was given a one-year sentence. After she returned to Iran, she was incarcerated on July 16. Several prominent exiles have been “convicted” in absentia and given long jail sentences, in order to deter them from returning to Iran. Others who have returned to Iran and have been arrested are under pressure to speak on national television and to “repent.” If they refuse, they are barred from leaving Iran.

Khamenei is also concerned about Rouhani’s attempt to give more freedom to the universities, which have always been the hotbeds of opposition to the ruling elite. His fervent wish is to continue the national security state under Rouhani’s predecessor, Mahmoud Ahmadinejad, in which the universities were severely repressed. Rouhani’s Minister of Research, Science and Technology, Reza Faraji Dana, who oversees the universities, took several steps to open up the repressive political environment at universities, replacing presidents and chancellors of many universities, and allowing many students and faculty who had been expelled to return. Hence, Khamenei’s office coordinated a move in the Majles [parliament] to impeach Faraji Dana. He was sacked on August 21 by a vote of 145 to 110.

Before the impeachment, many conservative and reactionary clerics, as well as the mass media controlled by the hardliners, attacked Faraji Dana—fiercely. They claimed that he had appointed the “seditionists”—supporters of the Green Movement - to important positions, and accused him of putting them in control.

In a speech on August 17 to the student branch of the Basij militia, the paramilitary force controlled by the hardliners, Gholam-Ali Haddad Adel, Khamenei’s senior adviser and father-in-law of Khamenei’s son, Mojtaba, said, “It has been a while since the Supreme Leader identified a great threat to the Islamic Revolution. He has warned senior officials several times. So, the Basij university students must be alert and prevent anyone from doing anything that might disturb the tranquility in our universities.” After Faraji Dana’s impeachment, Haddad Adel said, “Impeachment is over, but we will still be vigilant about the seditionists.”

And, the day after Faraji Dana was impeached and sacked, the daily Kayhan, a mouthpiece of the hardliners, declared, “Majles broke the sedition’s horn.”

Sadegh Larijani, the conservative judiciary chief said on August 20 that “finishing off the Green Movement” is “an important achievement” of the judiciary, adding, “If Rouhani accepts the existence of the sedition, he should not appoint its supporters [to important posts],” and, “Some people [meaning Rouhani] may say that the sedition is in the past, but its influence still persists.” He pointed out that the Green Movement’s leaders [former Prime Minister Mir Hossein Mousavi and his wife, Dr. Zahra Rahnavard, and former Speaker of the Majles Mehdi Karroubi] still insist on their positions, and thus such people should not be in a senior position.

Grand Ayatollah Naser Makarem Shirazi, a conservative allied with Khamenei, said after Faraji Dana’s impeachment, “We should keep an eye on the people [supporters of the Green Movement] who penetrated our universities. The majority of the Majles deputies were not happy with the Minister [Faraji Dana]. He had inappropriate deeds in his record. He was given an opportunity to correct them, but he did not take advantage of the opportunity that had been given to him.”

But, unhappiness with Faraji Dana is not the only issue. The hardliners and Khamenei are also not happy with Ali Jannati, Minister of Culture and Islamic Guidance (MCIG), because he has allowed a bit more openness in the cultural arena, including books, films, music, and theater. The conservative Morteza Nabavi, a Khamenei’s appointee to the Expediency Discernment Council [a constitutional body that arbitrates the disputes between the Majles and the Guardian Council], said on August 21, “We feel that the Ershad [the MCIG] has been left on its own [not following the Islamic culture], which reminds us of the reform era [presidency of Khatami]. The Supreme Leader is most concerned about Ershad.” Most recently, the hardliners staged a protest in front of the MCIG building, demanding that several movies that have been produced about the Green Movement not to be shown to the public.

Rouhani did not attend the Majles session in which Faraji Dana was impeached, but appointed Mohammad Ali Najafi, a moderate, as the interim minister immediately after the impeachment. Last year, Najafi had been nominated as the Minister of Education, but could not receive the Majles’ vote of confidence. He is more political than Faraji Dana, who was a scientific figure, and Rouhani has told him to continue Faraji Dana’s path. But, by law, Najafi can remain as the interim minister for only three months, and either he or someone else must be nominated as the permanent replacement for Faraji Dana.

Will Rouhani resist the hardliners’ pressure, or sacrifice his promises for more freedom for the sake of resolving the nuclear dispute and improving the economy?

Najafi has already replaced the presidents of five universities, and has announced that 1600 of the people close to Ahmadinejad had received illegal doctoral scholarships, but has not taken any action against them. Thus, through Najafi, Rouhani can fire all the corrupt and incompetent appointees of Ahmadinejad in the universities, and then nominate someone else as Faraji Dana’s replacement. Do Rouhani and Najafi have such a plan in mind? Only time will tell, but on August 23 Rouhani declared, “The government is determined to confront and uproot corruption in universities, including scientific corruption and granting scholarship [to unqualified students that had been done extensively during Ahmadinejad]. Replacing one [Faraji Dana] will not change anything and the government will continue its policy, which is based on the people’s wishes and their votes.”

One thing is for sure: Khamenei will relentlessly apply pressure on Rouhani. He does not want the Reformists to return to the government. After he underwent a minor prostate surgery, Khamenei’s office did not allow Khatami to pay him a visit in the hospital. But Khamenei is organizing a new political party through Sadegh Kharazi, a diplomat and a brother of his daughter-in-law for the Reformists that have been eliminated from power, so that he can claim that even the Reformist are free to be active in politics. The new political party is to be based on accepting “the leadership of the Supreme Leader in leading the society,” and “The rule of the Supreme Leader is the basis for national unity. In its absence Iran will be another Afghanistan or Iraq.” This is just another facet of Khamenei’s dictatorship.