The Khashoggi Murder: How the Turkish-Saudi Rivalry Escalated Over a Premeditated Murder 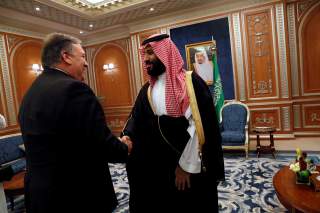 The murder of Washington Post journalist Jamal Khashoggi has illuminated the brutal nature of the Saudi regime, even forcing President Donald Trump to imply that Saudi Arabia’s Crown Prince Mohammad Bin Salman (MbS) was the brain behind this gruesome incident. In the president’s own words: “Well, the prince is running things over there more so at this stage. He’s running things and so if anybody were going to be [responsible for the murder], it would be him.”

The assassination in the Saudi Consulate in Istanbul has also brought into the open the Turkish-Saudi rivalry, which had so far remained largely hidden from public view. President Recep Tayyip Erdogan’s statement in the Turkish Parliament clearly laid the blame for Khashoggi’s murder at the door of the Saudi regime. Calling the killing “premeditated murder” he minced no words while posing the question: ‘‘Why was a team of fifteen Saudi men, all with qualifications related to the incident, gathering in Istanbul on the day of the murder?... On whose orders did those individuals go there?'” Erdogan implied that the murder was committed on the orders of the Saudi regime headed by MbS.

Erdogan’s statement and the attitude of the pro-government Turkish press over the past two weeks have fed public curiosity by graphically describing the goriest details of Khashoggi’s death. These leaks make clear that the Turkish political elite is relishing the embarrassment this affair has caused the Saudi regime, especially the crown prince. Ankara has had an uneasy relationship with Riyadh for several years. But, the rise of the reckless crown prince, who has brazenly flaunted Saudi power in the region during the past three years, has increased Turkey’s apprehension that the Saudis intended to dominate the Arab world to the exclusion not only of Iran but Turkey as well.

Turkish apprehension was amplified by the fact that President Trump sent clear signals soon after his inauguration that the intended to make Saudi Arabia the kingpin of America’s policy toward the Middle East. President Trump’s decision to visit Saudi Arabia immediately after his inauguration, the cozy relationship both Trump and Jared Kushner developed with MbS, and the American withdrawal from the Iranian nuclear deal—which pleased Riyadh tremendously—were seen in Ankara as clear indications that Trump had put all his Middle Eastern eggs in the Saudi basket.

From Ankara’s perspective, this increase in Saudi importance to the United States meant the downgrading of Turkey’s role in America’s Middle East policy. This seemed to be the case especially since it coincided with a downturn in Turkish-American relations. Turkey’s relations with the United States soured because of major differences in their approach to the Syrian Kurds. The United States supported the Kurdish YPG militia in the fight against the ISIS, a strategy that Turkey, which considers the YPG an extension the Kurdish PKK based in Turkey, vehemently opposed.

Furthermore, Turkey’s decision to buy the S-400 anti-missile defense systems from Russia despite American opposition to the deal added to the tensions between Washington and Ankara.

The visible American tilt toward Riyadh and away from Ankara accentuated the existing differences between Saudi Arabia and Turkey. The divergent approaches of Ankara and Riyadh toward the ever-shifting politics of the Middle East widened with the outbreak of the Arab Spring and the overthrow of dictatorial regimes in several Arab countries. Turkey enthusiastically welcomed the changes while the Saudi regime, feeling intensely vulnerable to the winds of change blowing through the Arab world, was strongly opposed to them. Matters came to a head with the overthrow of Egypt’s elected Morsi government, which represented the Muslim Brotherhood, by a military coup led by General Abdel Fattah el-Sisi. Turkey had applauded the coming to power of President Mohamed Morsi seeing it as a vindication of the moderate and parliamentary Islamist model that Erdogan’s AKP represented in the Middle East and an indication that the Muslim Brotherhood, with whom the AKP felt an affinity, had moderated its ideological stance.

On the other hand, Saudi Arabia was and is intensely apprehensive of parliamentary Islamism that bases its ascension to power on popular support since it directly challenges the Saudis’ absolutist Islamism. Ideologically, it represents a clash between Islamism from below—the Muslim Brotherhood and AKP models—and Islamism from above symbolized by the Saudi Arabian monarchy. No wonder that the Saudis not only embraced el-Sisi but immediately granted $2 billion to the military regime to save Egypt’s tottering economy and, more importantly, the regime itself.

Other differences between the two competing powers in the Middle East also came to the fore over the past couple of years. Saudi Arabia, as a part of MbS’s aggressive foreign policy in the region, decided to blockade the tiny kingdom of Qatar, principally to punish the latter for not adopting a sufficiently antagonistic stance toward Iran. Qatar has close relations with Turkey and has hosted a Turkish military base in the country since 2014, which was reinforced in December 2017. Moreover, the Emir of Qatar had sent a contingent of soldiers to provide security to President Erdogan at the time of the failed military coup in July 2016. Consequently, Ankara, alongside Tehran, supported Qatar in its dispute with Saudi Arabia to the great chagrin of the Saudi regime.

Turkey’s pro-Qatar stance also reflected the difference between Riyadh and Ankara in their approach toward Iran. While wary of Iranian ambitions and at odds with it on the Syrian conflict, Turkey is interested in keeping its relations with Iran on an even keel both because Iran is a significant supplier of energy to Turkey and because Ankara and Tehran face a common threat from Kurdish separatism. Additionally, Turkey is aware of Iran’s potential as the preeminent power in the Gulf, which is what the Saudi regime resents most. Although Saudi Arabia is locked in a series of proxy wars with Iran to prevent the latter’s emergence as a major regional power, Turkey’s primary interest with Iran is to reach an accord. Ankara hopes to strike a bargain that respects Iran’s preeminent role in the eastern Middle East in return for Iran accepting a similar role for Turkey in the western part of the region.

Syria had until recently been the battleground for the struggle between Iran and Turkey for preeminence in the Levant. But Turkey’s recent rapprochement between Ankara, Moscow, and Tehran—which intends to protect the interests of all the three powers in Syria—indicates that a modus vivendi has been worked out between Iran and Turkey on defining their spheres of influence in Syria. This has upset the Saudis to no end because it relieves the pressure on Iran in the Fertile Crescent and, consequently, allows it to concentrate its energies on contesting Saudi ambitions in the Persian Gulf region and in Yemen, which is where the Saudis are locked in a fierce battle with the Iranian-supported Houthis.

Thus, there are a number of important issues bedeviling Turkish-Saudi relations. The Khashoggi affair has provided Ankara with a great opportunity both to discredit the Saudi regime—especially the crown prince, whom Erdogan detests—as well as drive a wedge between Saudi Arabia and the United States. By doing this, Turkey has increased its importance in America’s strategy in the region. It is no wonder that President Erdogan has adopted such a strident anti-Saudi stance on the Khashoggi murder. His approach has given Turkey the high moral ground and potentially provided it with great strategic benefits.