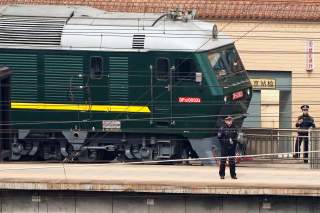 President Donald Trump’s willingness to meet Kim Jong-un helped melt a diplomatic freeze that left their two countries on the brink of war. The prospect of negotiation between the Democratic People’s Republic of Korea and America may have broken the more modest deadlock in relations between Beijing and Pyongyang. Now, Kim Jong-un is reported to be in China for a surprise visit with the Xi government.

The two communist “allies” have been closer to frenemies for most of their relationship. The People’s Republic of China intervened in late 1950 to save Kim Il-sung’s government from imminent overthrow by the United States and its allies. Among the hundreds of thousands of dead Chinese “volunteers” were Mao Zedong’s son, who is buried in the North.

That did not stop Kim from largely ignoring Beijing’s wartime role, destroying the DPRK’s pro-China faction on his way to absolute power, balancing the Soviet Union against the PRC, denouncing Mao Zedong over the runaway Cultural Revolution, and ignoring Chinese criticism while passing power on to his son, Kim Jong-il.

However, Beijing’s patience ran increasingly short after Kim Jong-un succeeded his father. Kim accelerated nuclear and missile testing, triggered a cascade of military threats from Washington, executed his uncle, the DPRK’s chief interlocutor with China, and later assassinated his older half-brother, who was living in Macau under the protection of the People’s Republic of China. North Korean officials and institutions made disparaging comments about Beijing. When I visited Pyongyang last year, economic managers told me of the North’s determination to remain independent of any nation, which made sense only in regards to China, which accounts for around 90 percent of the DPRK’s trade.

However, Xi Jinping’s government responded in kind. Although President Xi met a half dozen times with South Korean president Park Geun-hye, he never invited Kim to Beijing. And the People’s Republic of China steadily tightened sanctions against North Korea—and began to more seriously enforce the restrictions. As a result, the North has been paying a high price for its nuclear program.

It’s not quite a Cold War between the two governments. However, Pyongyang couldn’t rely on its large neighbor even if it desired to do so.

Nevertheless, any peace agreement or system almost certainly will require the PRC’s involvement. While the summit might implode or never even occur, it offers at least a possibility of peacefully resolving the recent stand-off between Pyongyang and Washington.

Thus, the visit, assuming it is real, suggests first an attempt by Beijing to reward the North for having suspended missile and nuclear tests and pressing for negotiations with the United States. Substance obviously is most important, but in this case process also matters. Without Pyongyang’s willingness to enter into serious bilateral discussions, no reasonable resolution of the possible conflict seems likely. The Xi government wants to encourage the DPRK to continue a cooperative attitude. Giving Kim a face-to-face with China’s likely leader-for-life further enhances the former’s prestige and stature.

Second, there likely are substantive discussions occurring as well. Supposedly Kim agreed to denuclearization if his government received security guarantees. What those might be remains a matter of conjecture. And Washington may be unwilling to satisfy the North—say, by removing U.S. troops from the South. In any case, an involved and cooperative China might make American promises to foreswear military action, especially regime change, more believable. While North Korea does not have a lot of confidence in Beijing, it might appreciate China’s participation to counterbalance the United States. If so, there is much for the China and North to talk about before the summit.

Economic development is also probably on the agenda too. Beijing enjoys a disproportionate role in the North’s economy, but Chinese companies often suffer when dealing with North Korean authorities. Any opening to the West would bring in more South Korean, Japanese, and U.S. investment, at least. The People’s Republic of China could play an important role, in terms of aid, investment, and trade, as well as helping the DPRK enter multinational economic institutions, such as the Asian Development Bank and the Chinese-dominated Asian Infrastructure Investment Bank.

Finally, the meeting likely reflects the China’s desire to remain relevant if President Trump does not let the appointments of Mike Pompeo as Secretary of State and John Bolton as National Security Adviser derail the summit. The Korean Peninsula obviously matters to Beijing. It does not want to see a de facto American outpost, especially with military bases and garrisons, on its border. Pyongyang also may have played to China’s fears, which would be exacerbated by knowledge of North Korean anger over China’s support for sanctions. After ignoring and isolating North Korea, Beijing may have decided that it has to reverse course, at least a little bit, for its own benefit.

Judging the ultimate impact of the (apparent) visit won’t be easy. The presumed trip is so shrouded in secrecy that it’s impossible to know for sure what is occurring, and we are unlikely to learn much about what was discussed, who discussed it, or what deal they made.

Still, Kim is more likely to agree to a deal if he feels secure, and he is more likely to feel secure if he believes that he has some cover from China, which saved his grandfather’s rule. For that reason Washington should look for opportunities to bring China into what hopefully will become an ongoing diplomatic process. President Trump might prefer American unilateralism, but that is unlikely to lead to a peaceful, stable, and nuclear-free Northeast Asia.

Doug Bandow is a senior fellow at the Cato Institute and a former special assistant to President Ronald Reagan. He is author of Foreign Follies: America’s New Global Empire.

Image: Police officers keep watch next to a train at the Beijing Railway Station in Beijing, China March 27, 2018. REUTERS/Jason Lee