Kim Jong Un May Be in China. What Does That Mean for Trump? 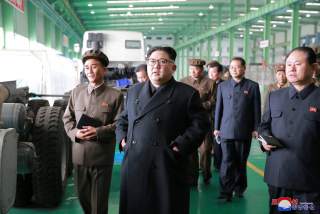 Nippon TV carried images of a train, similar to the one Kim’s father used, pulling into the Chinese capital. Security, NK News reports, was extremely tight.

The Nikkei Asian Review states that a dignitary rode in a convoy to the Diaoyutai State Guesthouse and additional guards were posted at the Great Hall of the People, which is where Chinese leaders traditionally meet their counterparts.

BBC China correspondent Stephen McDonell, among others, has been tweeting about the commotion in the Chinese capital surrounding the surprise visit.

If Kim was on the train—and there is no confirmation as of yet from China’s Ministry of Foreign Affairs—then it would be his first known trip outside of North Korea since assuming power in December 2011.

Robert Collins, a veteran Pentagon advisor who has worked with U.S. Forces Korea, speculated in comments to the National Interest that if Kim was not on the train, then China’s high-profile visitor might instead be Kim’s increasingly prominent sister, Kim Yo-jong.

And it should be no surprise that Xi chose this particular moment to summon Kim. Beijing was on the verge of being shut out of crucial discussions the North Korean leader will soon conduct with Moon Jae-in, South Korea’s president, and Donald John Trump, the American one.

Trump said he wanted to meet Kim before the end of May. Kim is scheduled to see Moon in April.

In short, China is desperate to claw its way back into the center of crucial discussions that will soon take place.

Beijing has tried to put the best face on its exclusion. “Regardless of the way ahead, solving the peninsula problem cannot be separate from the wisdom of China and it cannot be separate from the determination of China,” declares a March 16 commentary from Xinhua News Agency, the official Chinese media outlet. “On the peninsula issue, China has done a lot of work, provided a Chinese plan, and brought together all parties involved.”

There is no evidence that Beijing played such a meaningful role. If anybody deserves credit for brokering the upcoming talks, it would be Moon Jae-in, whose national security advisor, Chung Eui-yong, and chief of the National Intelligence Service, Suh Hoon, conveyed the offer to Trump after Moon had sent them to Pyongyang to speak with Kim.

Furthermore, Beijing may also be wrong about the future. “China will, as always, play a unique role in resolving the nuclear issue on the Korean peninsula,” Xinhua declared. It seems that Trump is thinking of cutting Chinese officials out of the process entirely. There are indications that his talks with Kim will take place in the Demilitarized Zone, Finland, or Sweden, not China, the site of all plenary sessions of the now-defunct six-party talks.

Accordingly, there must be alarm at the moment in the Chinese capital. “The downside risk for them is that they are not in the room,” Mira Rapp-Hooper of Yale Law School told the New York Times, referring to the Chinese. “Being completely cut out of a genuine relationship between the U.S. and North Korea is not in their interest.”

It’s definitely not in their interest. How can China convince everyone that it is a great power when Trump has pushed it aside so easily? So obviously, Xi, in recent days, exerted his considerable influence over North Korea to force Kim, his sister, or some other North Korean to the Chinese capital.

And China has considerable influence. As an initial matter, China is the North’s biggest trade partner, accounting for 92.5 percent of the North’s external trade in 2016, the last year for which there are reasonably reliable trade statistics.

China appears to provide more than 90 percent of the North’s crude oil, much of it on concessionary terms, and is the source of at least a third of North Korea’s food, something especially important now because of the persistent downturn in the North’s agricultural production. There are some years when China supplies all of the North’s aviation fuel. Investment from China, from both government and private sources, accounts for at least half the total foreign investment in the DPRK, as the Kim regime likes to call itself.

And there is one other lever. The most important thing China provides to the Kim regime is confidence in the minds of the senior regime figures in Pyongyang that they are safe from the United States, South Korea, and the rest of the world.

Beijing may not have the power to change Kim Jong-un’s mind on vital matters—it’s possible that no one can do so—but the Chinese can, if they want, convince regime elements that it is no longer in their interest to stick with either their weapons programs or Kim, who—after all the executions, detentions, and purges—does not look especially popular in regime circles.

By shutting off the oil, closing the border, prohibiting all investment into the North, and signaling to Pyongyang elites it no longer supports Kim, China can bring the North to its knees in months, maybe weeks.

And now is the moment for the Chinese to exercise clout. “Xi Jinping would not want Moon and Trump to be the first heads of state that Kim Jong-un meets,” David Maxwell, a prominent Korea analyst who served five tours of duty with the U.S. Army in South Korea, told the National Interest. “And of course this can provide the image that Kim is kowtowing to Xi and allows Xi to ensure his dominant role in the Korean peninsula and the region.”

Of course, Kim had reasons to be summoned. As Collins notes, “Kim Jong-un needs to ensure his back is covered because in Northeast Asia there is no security without an ally.”

In any event, the fact that a Kim or some official made the train journey to the Chinese capital is the final nail in the coffin of those who say Beijing does not control North Korea. Kim Jong-un, after all, is acting like a vassal.

And that perception suits China just fine. Beijing needs to counter the appearance that a willful U.S. leader has just marginalized Xi in his own backyard.

Image: North Korean leader Kim Jong-un visits a factory in this undated picture provided by KCNA in Pyongyang on November 4, 2017. KCNA via Reuters