Kim Jong-un Is Ready to Deal 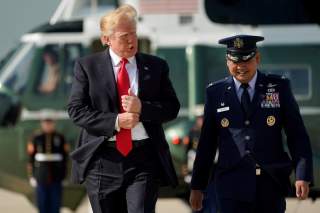 North Korea's “Supreme Leader” Kim Jong-un traveled a few steps south of the border last week to meet with his South Korean counterpart President Moon Jae-in in the “Peace House,” a three story white box of a building in the heart of the DMZ. They talked about denuclearization, economic cooperation, and—at long last—a formal peace treaty to end the Korean War.

That's a far cry from where we were at the beginning of the year, with Kim and U.S. President Donald Trump trading insults and the world's experts warning that nuclear armageddon was just around the corner. The Bulletin of the Atomic Scientists made it out to be “two minutes to midnight” on their famous Doomsday Clock, the worst situation since 1953. (The Cuban Missile Crisis rated only seven minutes to midnight, and Ronald Reagan never got closer than three.)

And yet here we are, with Kim meeting Moon and a Trump-Kim summit in the works for May or June. None other than the former Director of Central Intelligence and now Secretary of State Mike Pompeo has been to Pyongyang to work out the details, meeting personally with the Supreme Leader himself. Kim has also been to Beijing to get the go-ahead from his erstwhile sponsors in Beijing.

China is the key, precisely because its sponsorship is “erstwhile.” China has moved from defending North Korea (remember the Korean War?) to tolerating the regime to imposing tough economic sanctions. It's no coincidence that Kim Jong-un sent out his peace feelers to Washington less than one year after Donald Trump's meeting with China's President Xi Jinping at Mar-a-Lago last April. At the time, Trump was ridiculed for linking Chinese pressure on North Korea to American forbearance on labeling China a “currency manipulator.” Now that approach seems to be bearing fruit.

Facing increasing Chinese pressure, Kim seemingly went for broke with one final attempt to establish North Korea as a nuclear power last September. The massive explosion—which may or may not have been North Korea's first actually successful nuclear test—apparently destroyed the Punggye-ri test site that Kim is now so eager to negotiate away. Soon after the Punggye-ri site collapsed, North Korea shot off its final ballistic missile test. Supposedly the harbinger of a whole new testing cycle, the squib test now seems to have been a final shot.

No one outside Pyongyang knows the true state of North Korea's nuclear and missile programs. That's one truth. Another truth is that entire cadres of Western diplomats and defense analysts have a vested interest in believing and amplifying North Korean propaganda about its ability to launch nuclear-armed ICBMs at the United States. That doesn't mean they are wrong. But the idea that Kim Jong-un is offering a unilateral testing halt because he now holds all the cards in a high-stakes game of nuclear poker beggars belief.

Iran, with an economy roughly twenty times the size of North Korea's, thousands of Western-educated engineers and porous borders that make it easy to smuggle in parts, has so far been unable to develop a bomb. North Koreans haven't had access to international training for decades, and the country is so backward that its army still has to take time off every year to bring in the harvest.

North Korea has never had a clean, unclouded, question-free nuclear or ballistic missile test to unambiguously prove its capabilities. Every test has raised questions. Taken together, these many questions amount to one big one: is North Korea really a military and technological powerhouse, or just a gigantic nuclear fraud?

All we know for certain is that Trump is turning the screws, China is turning the screws, and Kim says he wants to deal. The experts say that the Supreme Leader now heads the second most advanced military force in East Asia, with the power to threaten not only South Korea and Japan but the United States itself. Maybe. Or maybe, with a collapsed economy and a Potemkin army, Kim is finally ready to cut a deal.

Salvatore Babones is an associate professor of sociology and social policy at the University of Sydney. He is a comparative sociologist who writes on comparative international development and on quantitative methods for the social sciences.

Image: U.S. President Donald Trump prepares to board Air Force One as he departs for a Make America Great Again rally in Washington, Michigan, from Joint Base Andrews in Maryland, U.S., April 28, 2018. REUTERS/Joshua Roberts