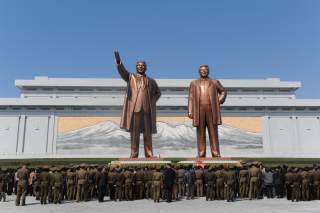 Parsing North Korea’s New Year’s Day speech for indications of regime intentions has become an annual exercise for Korea experts and the media. Advocates for engaging North Korea inevitably find “signals” that Pyongyang has turned over a new leaf and now eagerly seeks diplomatic resolutions to long-standing problems. Conversely, the media frequently take snippets out of context to generate angst-wringing headlines of North Korean threats to hearth and home.

The reality is that the great words from the Great Leader’s annual missive mean . . . nothing. Die-hard engagers will now be passionately pounding away on their keyboards with rebuttals citing some adroit and less vituperative passage that proves this year is different. Some experts even employ a Sherlockian dog-that-didn’t-bark logic to detect signals sent by not saying something.

But, like Linus sitting in the dark on Halloween wishing for the Great Pumpkin’s arrival, hope is a poor substitute for a consistent track record of failure.

In 2009, North Korean New Year’s remarks about the United States were less critical. This led many tea-leaf readers to predict a breakthrough with the incoming Obama administration. Instead, Pyongyang unleashed a series of provocations (including missile and nuclear tests), abandoned the Korean War armistice, and threatened war against Washington and its allies.

Similarly, the 2010 message was more muted in its depiction of South Korea. Surely this augured a thaw in inter-Korean relations. Instead, Pyongyang twice attacked South Korea, killing fifty by sinking a naval vessel in South Korean waters and shelling a civilian island.

In its 2011 New Year’s message, North Korea called on South Korea to abandon its military exercises. Five days later, the regime declared it was ready to resume “unconditional and early opening of talks [and] meet anyone anytime and anywhere, letting bygones be bygones.” The initiative was premised, however, on Seoul refraining from “any act of provoking [in order] to create an atmosphere of improving the inter-Korean relations.”

Select phrases from Kim Jong-un’s 2013 speech, such as “compatriots in the South,” were interpreted as harbingers of a less belligerent policy. Instead, within three months, Pyongyang revoked “all agreements on nonaggression reached between the North and the South,” declared inter-Korean relations had “entered the state of war,” put its artillery and rocket forces on the highest alert including against targets in South Korea, and threatened to turn the South Korean presidential residence into “ashes.”

Pyongyang’s 2015 speech generated headlines proclaiming Kim Jong-un’s desire for a summit with Seoul as part of a “big shift” in policy. But, North Korea’s diplomatic outreach was conditioned on cessation of allied military exercises, abandonment of sanctions and prevention of South Korean citizens from criticizing the regime. In August 2015, Pyongyang conducted a military attack that maimed two South Korean soldiers.

When North Korea’s “signals” don’t pan out, some experts blame the failure on the United States for not having responded properly by offering yet more concessionary gestures. But, given the many failed attempts at diplomacy with Pyongyang and the long track record of regime belligerency, the ranks of believers in North Korean outreach “signals” have thinned considerably.

This year’s speech was most notable for the media coverage of Kim Jong-un’s comments on North Korea’s missile and nuclear accomplishments. Although depicted in some headlines as a threat of imminent ICBM test, Kim’s comments were rather extolling the regime’s 2016 accomplishments.

Kim highlighted Pyongyang’s “epochal turn [achieving] the status of a nuclear power, a military giant, in the East which no enemy, however formidable, would dare to provoke.” He bragged of having “conducted the first H-bomb test, test-firing of various means of strike and nuclear warhead test successfully . . . and entered the final stage of preparation for the test launch of intercontinental ballistic missile.”

Of course, it is only a matter of time before Kim conducts more nuclear and missile tests to achieve and demonstrate his nuclear prowess. Several U.S. four-star commanders have said North Korea has, or we must assume it has, the ability to target the continental United States with a nuclear warhead. Other experts, however, assess Pyongyang isn’t there yet since it hasn’t yet conducted an ICBM test flight with a reentry vehicle. But the regime will likely attain that capability within a few years.

But North Korea already has the ability to reach the continental United States with a missile. After North Korea successfully put a satellite into orbit in December 2012, the South Korean navy dredged up the missile stages from the ocean floor. The Minister of Defense subsequently testified the missile had a ten-thousand-kilometer range that would reach 40 percent of the continental United States. After the successful February 2016 satellite launch, some experts now assess the range is thirteen thousand kilometers, which would reach all of the United States down to Miami.

What Should the United States Do?

While the Obama administration talked a tough game on North Korean sanctions, its policy was one of timid incrementalism. It was only last year that the United States had cumulatively sanctioned as many North Korean entities as it had Zimbabwean entities. Obama’s major actions against North Korea in 2016 were due largely to congressional pressure.

As the incoming Trump administration formulates its North Korea policy, it should understand that much more can be done to pressure North Korea through both direct sanctions and third-party sanctions aimed at foreign entities that facilitate North Korea’s prohibited programs.

A U.S. military attack against production or test facilities of North Korea’s nuclear or missile programs could trigger an all-out war with a nuclear-armed state that likely already has the ability to target South Korea and Japan with nuclear weapons, and has a million-man army poised across the DMZ from South Korea.

Rather than initiating an attack on North Korea for crossing yet another technological threshold, it would be more prudent to reserve a preemptive attack for when the intelligence community has strong evidence of imminent strategic nuclear attack on the United States or its allies.

Augmenting allied ballistic missile defenses, including deploying THAAD to South Korea, not only improve deterrence and defense capabilities, but could lengthen the fuse of war by reducing the need for preemptive attack.

Bruce Klingner is Senior Research Fellow for Northeast Asia at The Heritage Foundation. He previously served 20 years with the CIA and Defense Intelligence Agency.