Kim Jong-Un's New Year's Day Message to America: It Is Your Move 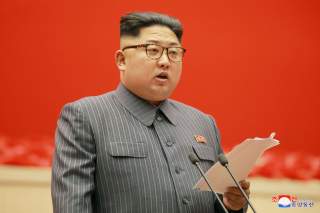 Kim Jong Un’s 2019 New Year’s address was predictable, subdued, and yet strategically significant. Kim knows what he wants, and he’s using the bully pulpit to get it. For a speech that’s famous for its domestic focus, it was surprising the extent to which foreign policy did feature in it. He took occasion to give the United States a veiled ultimatum, and openly linked his diplomatic initiatives to a strategy for economic development. The major implication is that if the livelihood of the North Korean people does not markedly improve, or if North Korea produces or proliferates nuclear weapons, it will be because of foreign devils opposed to peace and Korean destiny.

As I wrote in my recent book On the Brink, Kim’s mutually reinforcing goals in 2018 were sanctions relief, improving the quality of life for the North Korean people, and elevating the international status of his country while retaining nuclear weapons. The prevailing “mood of détente” and Kim’s global diplomatic outreach last year was aimed at achieving all of these goals.

Kim’s 2019 New Year’s speech reiterated these same priorities, and advanced a series of well-worn proposals to realize them: open inter-Korean economic projects; meet with Donald Trump “anytime”; normalize relations with the outside world; and get the alliance to stop military exercises and the United States to stop deploying nuclear-capable assets to Korea. These initiatives are fine all else being equal, but what makes them difficult is what’s not mentioned about them.

Inter-Korean projects, for example, would bring North Korea much needed foreign currency and would require sanctions relief to meaningfully pursue. Similarly, Kim is willing to meet with Trump anytime, but not under any conditions—Kim is constrained in where he’s willing to meet Trump and he’s shown no interest in diplomacy with the United States beyond the direct, superficial, and mutually flattering interactions with Trump himself. Whatever Kim’s intentions, meeting Trump without meeting with officials in the U.S. Government prevents a nuclear negotiation process, which in turn means no nuclear negotiation progress. Meanwhile, normalizing North Korea’s relations with the outside world sounds laudable enough, except that Kim wants it to happen while North Korea retains nuclear weapons. He wants to be “normal” without conforming to basic international standards of normalcy.

For South Korean policymakers, Kim’s speech was mostly good news. Kim invoked the North Korean strategic tradition of appealing to “Korean-ness” (uri minjokkkirri) to create an “us Koreans against the foreigners” narrative: “We know that the outside world is trying to be an obstacle towards unification and inter-Korean cooperation but we will not let this happen.”

His father did the same when he was in power. It’s a strategic use of Korean identity, and the practical implication is that North Korea will continue to be a willing collaborator in South Korea’s diplomatic efforts to improve inter-Korean relations and move toward peace. Good for them, not so good for the U.S.-South Korea alliance.

What we did not see in Kim’s speech is the one thing U.S. policymakers care about most: any material willingness to make any specific concession or account of North Korea’s nuclear arsenal. Kim claimed that refraining from nuclear and missile testing in 2018 was sufficient to earn U.S. “reciprocity”—specifically U.S. sanctions relief, an end to alliance military exercises, and promises from the United States to foreswear dispatching nuclear-capable weapons systems to the Korean Peninsula.

That’s bad news. It’s conceivable that Trump would agree to suspend alliance military exercises, and he’s voiced financial concerns about deploying nuclear-capable bombers (I have my own reservations about bomber deployments, but they’re strategic, not financial). In a way, the United States already met both of these demands in 2018. But sanctions relief is unlikely to be forthcoming, and that’s what matters most to Kim. Sanctions are inherently sticky because most involve legislation, thus making them outside Trump’s purview. Moreover, that’s separate from managing the appearance of being extorted into “giving” something to Kim Jong Un for essentially nothing.

Indeed, Kim saw fit to make a thinly veiled ultimatum in his speech: “…if the U.S. does not keep the promises it made in front of the world, misjudge the patience of our people, force a unilateral demand on us, and firmly continue with sanctions and pressures on our republic, we cannot but seek new ways to protect our autonomy and interests and establish peace and stability on the Korean Peninsula.”

Kim Jong Un has positioned America as the fall guy for a broken economic system in North Korea, and a non-existent diplomatic process to realize denuclearization. Once again he’s rhetorically outmaneuvered the United States. But Kim is right about one thing: it’s Washington’s move.

Van Jackson is a senior lecturer in international relations at Victoria University of Wellington, the defence & strategy fellow at the Centre for Strategic Studies in New Zealand, and a global fellow at the Woodrow Wilson International Center for Scholars in Washington. He is the author of On the Brink: Trump, Kim, and the Threat of Nuclear War (Cambridge University Press, 2018).