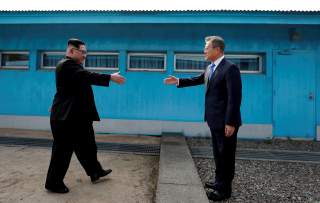 These differences have brought the issue of South Korean independence to the fore in ways not seen since the popular revolution that toppled Syngman Rhee in 1960.

After the Pentagon, through the UN Command, blocked North-South inspection plans for the railroads at one point, the Hankyoreh newspaper, which has adamantly supported Moon’s diplomacy, noted that Korean “critics have been vocal in proclaiming that Washington’s interference” in inter-Korean cooperation efforts “have reached the point of infringing on sovereignty.”

That remains a serious concern for many South Koreans, and will continue to be as the peace process moves forward. By proposing that North and South join ranks on this issue to pursue reconciliation, I believe Kim Jong-un is trying to create a new sense of purpose for the entire Korean nation. Rodong Sinmun focused on this point in a signed editorial on January 8, declaring that “all Koreans, wherever they live, should positively conduct various activities to disclose and denounce the moves of outsiders for aggression and demand lasting peace on the Korean peninsula.”

To be sure, the pan-national alliance Kim is suggesting is a long shot. Most South Koreans, including those on the left who support Moon’s policies, have deep reservations about the lack of democratic rights in the DPRK and the excessive power of Kim’s military and security forces—both of which are grim reminders of South Korea’s own past. Also, many Koreans are quite comfortable with their close alliance with the United States. Still, it could have a marked influence on public opinion in the South, particularly if Kim visits Seoul, as he hopes, and makes the pitch for greater independence then.

Bottom line: If the United States sticks to its line that no sanctions can be lifted until full denuclearization and continues to pressure Moon to limit his reconciliation efforts with Kim until a final deal on denuclearization, the renewed focus in both Koreas on the “sovereignty of the country” could emerge as the key factor in the Korean peace process.

That seems to be the most significant aspect of Kim’s speech, which touched on many other topics that have been well-covered elsewhere. I’m anxious to see, and report on, what unfolds.

Tim Shorrock grew up in Tokyo and Seoul and has been writing about U.S. relations with North and South Korea since the 1970s for The Nation and many other publications.