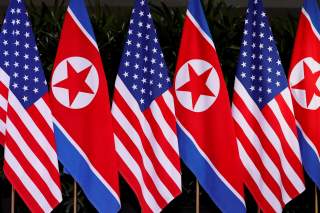 “It was a very warm, very positive letter,” said White House spokeswoman Sarah Sanders on Monday, referring to a hand-delivered note President Trump received from North Korean leader Kim Jong-un. “The primary purpose of the letter was to request and look to schedule another meeting with the president, which we are open to and are already in the process of coordinating that.”

A second summit? Some analysts think another meeting of the two leaders—the first was in Singapore on June 12—is a good idea. For instance, Morton Halperin says he believes that there are outstanding issues that deserve attention at the highest levels. In “Donald Trump’s Instincts Are Mostly Right on North Korea, His Advisors Are the Problem,” the Johnson, Nixon, and Clinton official makes the case that a second face-to-face would help Trump “regain control of his North Korea policy” from skeptical subordinates.

In fact, some think Chairman Kim sent the letter, handed over to the American side at the Demilitarized Zone on Thursday, to motivate Trump to overrule questioning officials and advisors.

So far, Trump’s approach has been good for Kim, often called the big winner from the Singapore summit. Many advised Trump not to meet the North Korean supremo then because, by merely shaking hands with a sitting American president, he gained legitimization, something his father, his predecessor, continually sought.

Kim also got Trump to endorse the North’s characterization of the joint U.S.-South Korea military exercises as “war games” and suspend those defensive maneuvers indefinitely. The United States promised, in the joint statement signed in Singapore, to extend “security guarantees” to the regime.

Most important, Trump effectively dropped his “maximum pressure” policy of cutting off money flows to Kim coffers. That policy, according to an internal U.S. government estimate, resulted in halving international payments to Kim.

Trump, in reality, got little in return. Kim made a promise that sounded like he was giving up his nuclear weapons and ballistic missiles but which was illusory. The joint statement refers to the “complete denuclearization of the Korean peninsula,” which is Kim family lingo for America giving up its nuclear weapons, breaking its alliances with South Korea and Japan, and leaving its bases in those countries.

Yes, Kim, as a sign of good faith, partially destroyed the Sohae Satellite Launching Station. Yet the site can be rebuilt in months and the regime has another such facility, making the partial demolition mostly symbolic.

In pre-summit concessions, Kim dynamited the entrances to the tunnels at the Punggye-ri test site for nukes, but the area appeared to be unusable due to previous tests, especially the September 3, 2017, detonation of a thermonuclear device. Analysts put that blast in the 140–250 kiloton range.

Kim this year has continued to refrain from detonating nuclear weapons and launching ballistic missiles, but it’s not clear the moratorium hinders his efforts that much. After all, the North’s engineers and technicians undoubtedly need time to digest all the information generated by the flurry of detonations and launches in 2016 and last year. Moreover, not all testing involves those publicly observable events.

In substance, Trump and Kim agreed to Beijing’s “freeze-for-freeze” proposal: a freeze on North Korean weapons testing and a freeze on the joint U.S.-South Korea military drills. That arrangement cements in place a status quo favorable to the North.

Worse, while the status quo remains in place, Kim, to make himself immune to American pressure, is free to build links with Beijing, Moscow and Seoul. That effort is paying off. As NBC News reported on the fifth of this month, Russia and especially China are openly violating UN sanctions.

South Korea, sensing that Trump has allowed the Russians and Chinese to declare open season on the UN measures, has gotten in on the act. In a defiant move, Seoul on Friday will open a liaison office in the Kaesong Industrial Complex, just north of the Demilitarized Zone. Before the complex was closed in February 2016, approximately 125 South Korean light manufacturing operations employed about fifty-two thousand North Koreans and in 2015 shoveled about $120 million into Pyongyang’s treasury. Although Seoul has issued denials, the office, which its Unification Ministry called “a round-the-clock consultation and communication channel,” is almost certainly a violation of UN sanctions.

Many including President Trump hailed the fact that Kim did not include any intercontinental ballistic missiles in Sunday’s parade marking the seventieth anniversary of the founding of the Democratic People’s Republic of Korea. Yet more important, since the summit his technicians have continued to turn out fissile material and work on facilities producing ballistic missiles.

The North’s continuation of its weaponization efforts undercuts the fundamental assumption of Trump policy, that Kim has made the strategic decision to give up his weapons.

Trump said at the Ottawa G-7, just before boarding Air Force One to Singapore, that he was giving Kim “a one-time shot.” To persuade the North Korean to take full advantage of that opportunity, Trump, with generous concessions, tried to make him feel secure enough to give up his nukes and missiles.

By now, however, there is too much evidence that the North has not made that decision to do the right thing. “I may stand before you in six months and say, ‘Hey, I was wrong,’” Trump said in the post–summit press conference.

Don’t wait six months, President Trump. And don’t give Kim another summit. While you wait, Kim is building weapons; his neighbors are violating sanctions; and, due to the suspension of the joint exercises, America’s ability to defend South Korea is eroding quickly.

There’s nothing to gain by allowing Kim, once again, to smile—and stall.