Kim Philby: The Spy Who Loved Himself 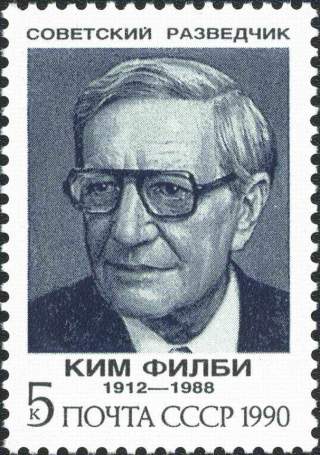 IT SHOULD be easy for the intelligence community to spot potential traitors early on, except for one problem. Many of the attributes that make for a potential traitor are the same ones that make for a successful agent, most notably a capacity for deception and the ability to lead two or more conflicting lives at the same time, a truly Freudian form of multitasking most normal people are incapable of. Anyone who has encountered practicing or retired spooks over the years—and as a native Washingtonian and three-time presidential aide I’ve certainly been exposed to my share—will be familiar with certain widely shared professional characteristics. Among these are a love of the mysterious for its own sake, a fascination with real or imagined conspiracies, the conviction that a straight line is almost never the shortest distance between a problem and a solution, and both a talent and a taste for juggling multiple identities—usually out of necessity, but sometimes for the sheer pleasure of it.

The exceptions to this ambiguous and often-conflicted mind-set—and fortunately there are many of them—are skilled espionage professionals with a secure sense of self, firm values and loyalty, and a willingness to serve their country in ways they may sometimes find distasteful, just as a good cop routinely must deal with sordid people and disgusting behavior while fighting crime.

Potential traitors, on the other hand, seem to be drawn to deceit for its own sake. Fooling those around them—usually including their own families, friends and loved ones—and being the secret sharers of forbidden knowledge gives them a much-yearned-for feeling of superiority. In the case of double agents such as the CIA’s Aldrich Ames and the FBI’s Robert Hanssen, the desire to outshine distant, scornful and, in some cases, abusive fathers may have lent treason extra appeal: a symbolic act of patricide on a national scale. Such may have also been the case with Kim Philby, whose taste for betrayal and talent for lying made him perhaps the most successful double agent in modern British history. He has certainly been the most written about, with well-respected observers like Anthony Cave Brown and Patrick Seale, along with many others, weighing in at length on the subject. It is therefore understandable that, in A Spy Among Friends, British author-journalist Ben Macintyre set out to write “not another biography of Kim Philby” but instead a description of “a particular sort of friendship that played an important role in history, told in the form of a narrative. It is less about politics, ideology, and accountability than personality, character, and a very British relationship that has never been explored before.”

Herein lies both the strength and weakness of this generally sound and highly readable tale of friendship and betrayal. By trying to fit the story of Philby’s treachery into a neatly novelistic structure, the author occasionally lets art trump historical perspective. Philby’s story, as told by Macintyre, is all about friendship betrayed—especially the betrayal of Philby’s two most important professional friends, MI6’s Nicholas Elliott and the CIA’s James Angleton. Elliott, who might best be described as an armed, dangerous version of P. G. Wodehouse’s Bertie Wooster, emerges as a thoroughly decent, delightful character in over his head. One of Macintyre’s more enjoyable passages describes the family background that predestined Elliott for high government service:

The Elliotts were part of the backbone of the empire; for generations, they had furnished military officers, senior clerics, lawyers, and colonial administrators who ensured that Britain continued to rule the waves—and much of the globe in between. One of Elliott’s grandfathers had been the lieutenant governor of Bengal; the other, a senior judge. Like many powerful English families, the Elliotts were also notable for their eccentricity. Nicholas’s great-uncle Edgar famously took a bet with another Indian Army officer that he could smoke his height in cheroots every day for three months, then smoked himself to death in two. Great-aunt Blanche was said to have been “crossed in love” at the age of twenty-six and thereafter took to her bed, where she remained for the next fifty years. Aunt Nancy firmly believed that Catholics were not fit to own pets since they did not believe animals had souls. The family also displayed a profound but frequently fatal fascination with mountain climbing. Nicholas’s uncle, the Reverend Julius Elliott, fell off the Matterhorn in 1869, shortly after meeting Gustave Flaubert, who declared him “the epitome of the English gentleman.”

“Eccentricity,” Macintyre concludes, “is one of those English traits that look like frailty but mask a concealed strength; individuality disguised as oddity.” Even Philby, in an otherwise snide report to one of his early Soviet handlers, paid grudging tribute to “MR NICHOLAS ELLIOTT. 24, 5ft 9in. Brown hair, prominent lips, black glasses.” Philby called Elliott “ugly and rather pig-like to look at,” but also added, “Good brain, good sense of humor.”

Angleton, the other great betrayed friend of Philby’s career, was a loopy Anglophile. In Macintyre’s words, he was “the product of a romantic and unlikely marriage between Hugh Angleton, a soldier-turned-cash register salesman, and Carmen Mercedes Moreno, an uneducated, fiery, and exceptionally beautiful woman from Nogales, Arizona, with a mixture of Mexican and Apache blood.”

Born in Boise, Idaho, Angleton accompanied his parents to Italy, where his father ran the Milan office of the National Cash Register Company. He was then sent off to England for a “proper” public-school education that, according to Macintyre, left him with “courteous manners, a sense of fair play, an air of cultivated eccentricity, and a faint English accent that never left him. The boy from Idaho was already ‘more English than the English,’ a disguise he would wear, along with his Savile Row suits, for the rest of his life.”

Philby couldn’t have asked for two more ideal pushovers than Angleton and Elliott. Both were completely taken in by him despite the fact that, in most respects, they were competent, conscientious intelligence officers. They simply could not imagine the possibility that their trusted, respected friend and mentor was a traitor, especially one who had made fools of them both.

EMPHASIZING THE uniquely English aspects of Philby’s case, his taste for London club life, his superficial, pipe-smoking tweediness and the way he exploited upper-class solidarity, Macintyre tends to gloss over the more generic similarities Philby’s treason bears to the betrayals of other Cold War traitors. Those people came from a variety of social milieus, but were all motivated by the same mixture of vanity, innate deceitfulness, and pleasure derived from duping friends, colleagues and loved ones, all the while playing what they thought of as a brilliant solo game. Almost always, a large dose of megalomania was involved, along with the traitor’s conviction that he was a far smarter, more meritorious man than any of his colleagues or superiors. The social backdrop can vary, but the traitorous personality type—vain, capable of total detachment from normal emotional bonds and with no sense of accountability to a higher moral authority—is consistent. This is true whether the culprit is a supposedly devout Catholic attendee of daily mass like the FBI’s Robert Hanssen, an inconspicuous code clerk like the U.S. Navy’s John Anthony Walker, who successfully spied for the Soviets from 1968 to 1985, or a boozy, big-spending mediocrity like Aldrich Ames, a second-generation CIA hack who blew the covers—and thereby caused the deaths—of some of his agency’s most important intelligence assets behind the Iron Curtain. Philby was merely a more polished model.

Still, by concentrating on the intricacies of the old boys’ network that dominated British intelligence throughout the nineteenth century and for the first half of the twentieth, Macintyre helps us to understand why it was so easy for Philby to get away with so much treason for so long. It also explains why far more inept British traitors like Guy Burgess (a roaring drunk) and Donald Maclean (a guilt-ridden and violent neurotic) long managed to escape detection. Ironically, the best cover Burgess had going for him was his own outrageous behavior; friends and foes alike could scarcely believe he was able to hold onto his day job, much less function as a double agent for the Soviets. Macintyre excels at showing us how and why such betrayals were possible in their particular time and place; it tells us less about the qualities of the individuals that attracted them to treason.

Once they chose their course, they could take advantage of the culture of privileged entitlement to gain free entry into the world they sought to betray. But why did they want to betray it? For generations, sons of the upper-middle class and gentry who went to the right schools and played cricket together had run not only British intelligence, but also the army, the navy, the Church of England, Parliament, the banking world, and the colonial and civil services. As members of that class, men like Philby were protected by an invisible coat of class armor. Their overwhelmingly loyal colleagues (and social peers) simply could not conceive of “one of their own” ever committing acts of base betrayal they themselves considered unthinkable. And the fact is that, overall, British espionage and counterespionage running on this unwritten honor code worked remarkably well throughout the heyday of the empire.