Kissinger Has The Answers To America's Syria Quagmire 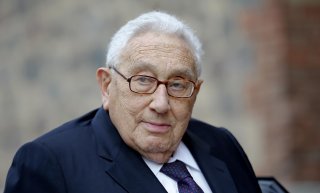 Amidst the international furor over the politicization of economic sanctions and aid in Syria, one thing that is missing is a comprehensive U.S. strategy on Syria. While analysts rush to ponder the inner workings of Damascus, the more appropriate question is what is U.S. policy on Syria beyond sanctions? Is there a more suitable lens than looking at Syria through the Iran prism?

Contradicting statements abound and the United States has oscillated between first demanding the ouster of Bashar al-Assad and later announcing that it is no longer seeking regime change. Yet in June, Washington announced the new Caesar Syria Civilian Protection Act as a means to pursue a political transition. The Caesar Act is aggressively targeting and sanctioning Syrian senior officials and businessmen but also third parties who want to do business with Syria. It is meant to deter China, the UAE and other Gulf states from becoming Syria’s economic saviors. The Caesar Act is the most comprehensive sanctions program in history and will have a great economic effect on Syria and its neighbors, especially Lebanon. A key objective of the Caesar Act is to hold the Syrian military and government accountable for its actions.

However, not everyone is convinced of the Caesar Act; America’s allies in Europe and the Middle East are questioning its wisdom. Nations such as Egypt, the UAE and Greece see more wisdom in supporting Syria as a hedge against Turkish aggression in the Mediterranean. The United States needs to reexamine its Syria policy and be mindful of its allies’ differing priorities, or it may see them break with Washington’s policies. Moving forward, the United States needs to adopt a realist strategy in Syria that mirrors the policies that stalwarts of the Nixon and Reagan eras executed when they negotiated with Syria.

Changing Priorities in the Region

While the likes of U.S. Special Representative for Syria Engagement James Jeffrey and Special Envoy for Syria Joel Rayburn think they can isolate Syria through the Caesar Act—they have clearly overlooked the region’s changing priorities. It is no secret that Jeffrey is overly sympathetic to Turkey and its interests in the region beyond Syria. While Jeffrey supports Turkey, he is up against a rising tide of anger and diplomatic and military will in the region to oppose Turkey and its actions in Syria, Libya, the Mediterranean and Horn of Africa. France, Greece, Egypt, and the UAE are all opposed to Turkish action, and Saudi Arabia and the UAE now see Turkey as a bigger threat than Iran to their regional ambitions. Furthermore, Iran’s embrace of Turkey is complicating U.S. strategy to counter Iran. Thus, if Jeffrey’s, and therefore America’s, policy is to bat for Turkey in Syria, how does Washington account for Turkey’s embrace of Iran? This is occurring while the other major Arab states are lining up to support the head of the Libyan National Army Khalifa Haftar in Libya and Assad in Syria. Barring Qatar, nearly all the other Arab states see Turkey as an equal if not greater threat to Iran as pointed out in a recent op-ed in the Saudi newspaper Arab News.

Similarly, Russia and China are uniting to veto United Nations Security Council resolutions on Syria as well as simultaneously mocking the Caesar Act by forging ahead with their economic plans for Syria. As U.S. animosity toward China grows post-coronavirus, China is doing its best to defy U.S. objectives in Syria. A joint Russia-China plan for Syria has been in the offing since 2018 and will speed up after the Caesar Act was announced. Russia, along with the UAE and Egypt, is determined to forge ahead with rehabilitating Assad within the Arab world. A UAE-Russian alliance in Syria will further weaken U.S. policy and the Caesar Act.

Europe is also showing a willingness to break with the United States on Syria. There have been a number of policy briefs in European think tanks officially aligned with the European Union which have called for either rethinking sanctions or a completely breaking with the United States’ policy of punitive sanctions on Damascus. Writing for Rome based think tank Istituto Affari Internazionali, the Syrian economist Amer al Hussein argued that time has perhaps come for a break with the United States on European policy on Syria. The Financial Times, which has had in-depth coverage of Syria’s economic collapse, has already written about how the Caesar Act will not have any meaningful impact on Assad or the government—instead, it argues it will only pile on the misery for ordinary Syrians.

Much can be learned from Kissinger’s diplomacy towards Syria and with the consistency of Hafez al-Assad’s strategic doctrine, which German scholar Bente Scheller summed up in her aptly titled book The Wisdom of Syria’s Waiting Game. Scheller argues that for whatever international or regional crisis that the Syrians have encountered over the last five decades, they have ridden it out by waiting it out. In James Sebenius’ Kissinger the Negotiator, the clear lesson is that Kissinger believed that only through negotiations could the United States achieve progress on Syria, regardless of how irksome Damascus was being in Lebanon, Jordan and the West Bank. Moshe Ma’oz, in the Sphinx of Damascus, also quotes Kissinger’s way forward when it comes to negotiating with Damascus.

The premise is simple, Damascus has ridden out the major calamities of the Levant and Gulf for the last fifty years despite always being on the opposing side of the United States. With reluctance, the United States had to give way to Damascus in Lebanon even forcing the Israelis to withdraw in 2000. The United States also had to acknowledge the importance of Syria with regard to negotiating in Oslo and Camp David. Despite what the Israelis thought was their best offer to Damascus even as late as 2010 through the Turks, Damascus still would not relent on a policy matter that made it look subservient to U.S. interests. In a brilliant book on Reagan-era diplomacy with Syria, Cursed is the Peace Maker, the whole U.S. emphasis on Syrian diplomacy was the fact that while Ronald Reagan was loathed to talk to Assad, like Kissinger before him, he had no other option but to resolve outstanding issues by talking rather than isolating. Camille Alexandre Otrakji, who specializes in U.S.-Syrian negotiations during the Hafez al-Assad era, is of the view that “When Hafez Assad assumed the presidency in 1970 he actually favored a balance between the United States and the USSR but on his terms, hoping this would also lead to warm relations with the United States. Initially, the Nixon administration was very pleased, however, the United States wanted Syria to mind its own business in the region. But Syria, unlike Egypt, which is isolated from all neighbors, naturally blends into its neighbors in Iraq, Lebanon, and Palestine. The United States can continue to squeeze and punish Syria with not much effort.” The premise here is that Syria is not just Syria, anything that happens within the country impacts Lebanon, Turkey, Iraq and Israel, hence the need for a wholesome strategy.

Syria under the Assads has survived sanctions for thirty years during their fifty-year rule, it is not a new phenomenon. Similarly, whenever necessary, Damascus has been able to partner up with the Arab Gulf countries despite its ongoing security partnership with Iran. Syria has broken and mended ties with Saudi Arabia on at least three occasions. The current UAE and Bahrain alliance has the blessings of the Saudis and despite the Caesar Act, the Gulf will eventually look to support Assad against Turkey, which is now seen as the main threat in the Levant. Moreover, with Lebanon on the verge of economic collapse and additional chaos in Iraq, major Arab players such as the UAE, Egypt and Saudi Arabia will not want the Caesar Act to further weaken Syria given its centrality to Iraq and Lebanon.

Commentators had said that Bashar al-Assad would not last long after his father’s death, they were wrong. They said he would not survive the post-9/11 world, the fall of Baghdad in 2003, and the Syrian military withdrawal from Lebanon after the assassination of Prime Minister Rafic Hariri in 2005. In 2011, they said he would fall within weeks. These voices have always been wrong. The Caesar Act will not weaken Assad or the Syrians’ influence in the region. No matter how isolated Damascus is, Syria will ride it out. After all, Kissinger was not alone in his analysis on Syria’s centrality to the region. Zbigniew Brzezinski and Brent Scowcroft, two other stalwarts of American national security for over forty years, warned in 2015 that fighting Assad made no sense, and at some point talking and not isolating would be the way to end the bloodshed. In his recent book on American diplomacy, The Back Channel, William Burns wrote of Kissinger’s and Brzezinski’s cold logic over the need to temper the desire to topple or pressure Assad. He wrote in 2020 how James Baker and Brent Scowcroft too would have used realism rather than ideology to deal with Assad. Burns also wrote of how the UAE, in particular, was less convinced that Assad would fall.