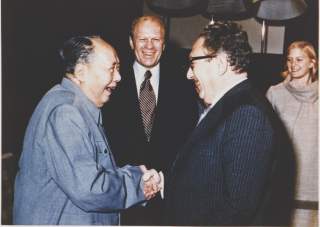 WHEN HENRY KISSINGER celebrated his ninetieth birthday in Manhattan’s St. Regis Hotel in June 2013, he attracted an audience of notables, including Bill and Hillary Clinton, John Kerry, Valery Giscard D’Estaing, Donald Rumsfeld, James Baker and George Shultz. Kerry called Kissinger America’s “indispensable statesman,” but it was John McCain who, as the Daily Beast reported, electrified the room with his remarks. McCain, who was brutally tortured in what was sardonically known as the Hanoi Hilton, earned widespread respect for courageously refusing to accept an early release from his Vietnamese captors after his father had been promoted to commander of the U.S. Pacific Fleet.

At the party, McCain recounted for the first time the specific circumstances of that refusal. He explained that when Kissinger traveled to Hanoi to conclude the agreement ending the war in 1973, the Vietnamese offered to send McCain home with him. Kissinger declined. McCain said:

He knew my early release would be seen as favoritism to my father and a violation of our code of conduct. By rejecting this last attempt to suborn a dereliction of duty, Henry saved my reputation, my honor, my life, really. . . . So, I salute my friend and benefactor, Henry Kissinger, the classical realist who did so much to make the world safer for his country’s interests, and by so doing safer for the ideals that are its pride and purpose.

It was a poignant moment. On one side was a scion of one of America’s preeminent military families who went on to become a senator championing a hawkish foreign policy that precisely reflects the neoconservative wing of the GOP. On the other was a Jewish refugee who had personally witnessed the descent of his homeland into ideological fanaticism and fled it with his parents to embark upon a new life in the United States, where he became a premier exponent of realist thought in foreign policy and a world-famous statesman. Both were bound together by events that forged a bond between them that was deeper than any differences they may have about America’s role abroad.

THE COMITY they displayed at the birthday gala is especially striking in the context of the contemporary Republican Party, where the principles that Kissinger has espoused over the past seven decades have not simply been abandoned. Again and again, they have been denounced as antithetical to American values. And this denunciation has come from both the left and the right.

Though Kissinger has come under attack from liberal circles—among the more notable assaults are Seymour Hersh’s The Price of Power, Christopher Hitchens’s The Trial of Henry Kissinger and, most recently, Gary J. Bass’s The Blood Telegram—he has also regularly incurred the ire of conservatives. Throughout the 1970s, he was steadily denounced as deaf to human-rights concerns on the one hand, and as an appeaser on the other.

Perhaps the virulence of the attacks should not have come entirely as a surprise, since Kissinger did not emerge from the conservative wing of the GOP. Instead, he emerged from the ranks of the American establishment. Indeed, Kissinger was a Rockefeller Republican who first earned fame in the 1950s as a fellow at the Council on Foreign Relations, where he published a study on nuclear weapons and Europe. He was also a professor of government at Harvard and a consultant to John F. Kennedy’s national-security adviser, McGeorge Bundy. Then, in 1968, Richard Nixon tapped Kissinger to become his national-security adviser. Kissinger added the post of secretary of state in 1973, a position that he retained after Gerald Ford became president, though he had to relinquish his post as national-security adviser.

Throughout, Kissinger attempted to apply the theoretical principles of classical realism to achieve what he saw as a global equilibrium of power. Together with Nixon, he promoted détente with the Soviet Union, established relations with China, ended the Vietnam War, and pursued shuttle diplomacy to end the 1973 Yom Kippur War between Israel and the Arabs. In essence, Kissinger outmaneuvered the Soviets in both China and the Middle East. Kissinger’s aim was not to launch a crusade against the Soviet Union, but to formulate a creative response to promote a balance of power in the mold of the Congress of Vienna, which secured the peace for much of nineteenth-century Europe before the big bang of World War I, when a rising Wilhelmine Germany embarked on a reckless bid to relegate the British Empire to the second tier of world powers.

In response, the neoconservatives, who had been staunch Democrats, united with the Right in decrying Kissinger as pursuing a policy of appeasement and surrender. Senator Henry M. “Scoop” Jackson and his aide Richard Perle steadily worked to stymie the Strategic Arms Limitation Talks that Nixon and Kissinger pursued with the Soviet Union and helped author the 1974 Jackson-Vanik amendment, which tied most-favored-nation status to the right of Soviet Jews and others to emigrate. (In his memoir Years of Renewal, Kissinger would single out neocon leaders Norman Podhoretz and Irving Kristol for criticism: “Tactics bored them; they discerned no worthy goals for American foreign policy short of total victory. Their historical memory did not include the battles they had refused to join or the domestic traumas to which they had so often contributed from the radical left side of the barricades.”)

At the same time, Ronald Reagan, during his 1976 primary run against Gerald Ford, denounced Kissinger as aiming for “second best” against the Soviet Union. Kissinger responded by issuing a ten-page State Department document titled “The Reagan Speech and the Facts” and by calling Reagan’s remarks a “contemptible, irresponsible invention.”

As president, Reagan split the difference between Kissingerian realism and a crusading foreign policy. He was cautious about the direct use of military force abroad, relying upon aiding insurgent forces in Nicaragua, Afghanistan and elsewhere to take the battle to Moscow. He temporized during the imposition of martial law in Poland in 1981, causing Commentary editor Norman Podhoretz to accuse him of “appeasement by any other name.” By the end of his term, Reagan, prompted by his fear of nuclear war and the rise of a more conciliatory Soviet leader in the form of Mikhail Gorbachev, signed more sweeping arms-control treaties than Nixon and Kissinger had ever envisioned.

The George H. W. Bush administration represented a reversion, more or less, to the doctrines of Nixon and Kissinger. Bush himself was an alumnus of the Nixon administration, as was his national-security adviser, Brent Scowcroft. Secretary of State James Baker incurred the wrath of the neocons for his opposition to Israel’s construction of settlements. And as the Soviet Union imploded, the administration deliberately avoided adopting a triumphalist tone.

But triumphalism quickly became the order of the day as conservatives claimed that Reagan, and Reagan alone, had not only prognosticated the collapse of the Soviet Union, but also brought it about. By 1996, William Kristol and Robert Kagan were declaring in Foreign Affairs that it was high time to return to what they termed a “neo-Reaganite foreign policy.”

The results were on display in the debacle that the George W. Bush administration created in the Middle East. The GOP has not really moved on from this disaster. For much of Barack Obama’s presidency, it has mostly refused to reexamine what went wrong in Iraq. Senator Ted Cruz, Governor Rick Perry and Senator Marco Rubio are all decrying what they describe as the appeasement-minded policies of President Obama and calling for a return to what they see as the principles exemplified by Reagan. Today, a debate has belatedly begun to emerge as Senator Rand Paul challenges the presuppositions of the neocons, as he did in a speech at a dinner at the Center for the National Interest in January 2014, where the audience included Kissinger and Scowcroft. Paul said that “our foreign policy and national security policy are too belligerent” and that “negotiation can improve our world.” But no potential candidate has sketched out a fully coherent and persuasive program of renewal.

IN HIS NEW book, World Order, Kissinger does just that. It demonstrates why he remains such a courted adviser to American presidents and foreign leaders alike. Written with his characteristic lucidity and incisiveness, it offers a grand tour of the rise of the West. Kissinger does not provide a laundry list of policies. Instead, he offers a meditation and a mode of thinking about events that is starkly at variance with much contemporary foreign-policy discourse. Diplomatic history has largely fallen into desuetude in the American academy, but Kissinger expertly mines the past to draw parallels between it and the present. Kissinger returns to his central concern of the difficulty of establishing an equilibrium among the great powers. He has been preoccupied with this problem since his first book, A World Restored, in which he examined the efforts of Metternich and Castlereagh to create a stable Europe in the nineteenth century. It is remarkable how consistent his thought has remained over the decades. He argues that the central challenge of the twenty-first century is to construct a new international order at a time of mounting ideological extremism, advancing technology and armed conflict.