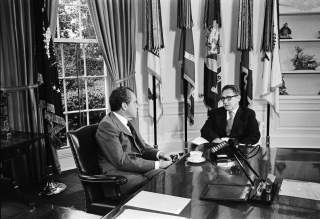 YOU ARE offered a high-level position in the Trump administration with a chance to influence policy. Yet you share the view of almost everyone you know that Trump is an unpredictable leader with no core principles except what stokes his ego and augments his personal power. Should you accept the offer?

Two opposing camps are ready with advice, though what they have to say is not especially helpful. One camp demonizes Trump and believes that nothing good can come from any connection with him. Analogies with Hitler are never far from their lips. Their counsel is simple: steer clear. The other camp takes a different view. Go work for Trump because the position will burnish your résumé. You conduct yourself with aplomb and win praise for your professionalism. If Trump crashes and burns, you might even be applauded as someone who rose above it all.

But you disagree with all of the above premises. You do not equate Trump with Hitler. Nor are you so cynical or opportunistic as to make a major life decision merely in order to pad your résumé. You live in between those extremes. How, then, should you decide?

The question is as old as government itself. Indeed, two of the most serious thinkers in foreign policy, Henry Kissinger and his friend, mentor and frequent policy antagonist Hans Morgenthau, pondered the matter, examining it in depth. Their close analysis can provide valuable guidance, and is worth considering in any case, since the question is a perennial one, whether you are on the left or right, whether the president is a liberal, a conservative or Donald Trump.

IN LATE November 1968, when Richard Nixon asked Kissinger to become his national security advisor, Kissinger lived in Cambridge, Massachusetts, where a contemptuous attitude toward all things Nixonian was the ticket into polite Harvard society. Kissinger’s friends, among them such Democratic stalwarts as Arthur Schlesinger Jr. and John Kenneth Galbraith, were almost all committed liberals and, “to a man,” Kissinger said, had voted against Nixon. As it happened, Kissinger himself shared their view. Kissinger had been a loyal and dedicated aide to Nelson Rockefeller as well as a prominent fixture at the Council on Foreign Relations. Kissinger had been horrified by the rise of the Goldwater Right in the 1964 campaign and compared the convention at the Cow Palace in his diaries to the Nuremberg rallies. During the 1968 campaign, Kissinger had viewed Nixon with similar discomfort. He called Nixon “unfit to be president” and “a disaster” waiting to happen. Just before the Republican convention Kissinger said, “Richard Nixon is the most dangerous of all the men running to have as president.” (Such opinions didn’t prevent him from providing help to the Republicans during the campaign, but then nobody ever claimed that Henry Kissinger was straightforward.)

The prospect of going to work for Nixon thus raised age-old questions about the uses and abuses of power. How could Kissinger associate with a man who, he said, promised to be a “disaster”? Wasn’t this an unworthy, even objectionable use of his talents? What price was one willing to pay to be close to power? What sacrifices of personal honesty would be involved, not to mention personal dignity? Shortly before his meeting with Nixon in New York to discuss working for him, Kissinger was already pondering all this, even if nobody else was. In a conversation with the journalist Gloria Steinem, he wondered if it was better for someone to try to affect policy by working inside government, however distasteful the circumstances might be, or to preserve one’s independence and integrity at the price of influence by standing outside and criticizing—or in Lyndon Johnson’s memorable image, whether it was better to be inside the tent pissing out or outside the tent pissing in. Steinem urged Kissinger to write an article for New York Magazine to be entitled “The Collaboration Problem.”

In fact, Kissinger had already written just such an article in 1959, entitled “The Policymaker and the Intellectual.” At that time, with public office only a distant prospect, Kissinger didn’t address the question of moral compromise directly; his approach was dryer, more academic, focused on the universal human dilemmas arising from the restraints imposed by institutions. Employing a framework familiar to any student of Max Weber, he examined the tensions between the modern bureaucratic state and the independent, free-thinking intellectual. And much of what he said foreshadowed his later battles with the State Department.

Societies, he wrote, had become increasingly bureaucratized, with governmental departments divided into specialties and jobs stripped down to routinized tasks defined by organizational imperatives. A premium was placed on administrative and technical skills, while planning and policy were relinquished to committees of “experts,” who arrived at their decisions through consensus and compromise. “In this manner, policy is fragmented into a series of ad hoc decisions which make it difficult to achieve a sense of direction.” Kissinger reached for an analogy: “It is as if in commissioning a painting, a patron would ask one artist to draw the face, another the body, another the hands, and still another the feet, simply because each artist is particularly good in one category.”

What got lost in the process was any vision, any sense of overall purpose, as well as any individual responsibility for defining goals and setting direction. “Neither Churchill nor Lincoln nor Roosevelt was the product of a staff.” The modern bureaucracy simply rolled along according to its own predetermined rules, with no more head and no more heart than any other well-oiled machine. Kissinger called the ideal bureaucrat a “commissar,” and by that he didn’t mean only placeholders in the Soviet Union, but bureaucrats in the United States as well. The commissar/bureaucrat was any administrator “whose world is defined by regulations, in whose making he had no part, and whose substance does not concern him, to whom reality is exhausted by the organization in which he finds himself.” The mentality of the commissar could result in the deaths of thousands, “without love and without hatred.” And even if the outcome was not murderous, the placeholder’s “impact on national policy is pernicious.”

Standing against this entrenched bureaucracy was the autonomous intellectual. Some intellectuals insisted on preserving their freedom by remaining outside the governmental apparatus, but these people Kissinger criticized for “perfectionism,” or for engaging in protest that “has too often become an end in itself.” Kissinger preferred the collaborators who chose public service. Intellectuals, Kissinger insisted, should “not refuse to participate in policymaking, for to do so would confirm the administrative stagnation.” Still, those who did choose public service had their own problems to deal with.

Faced with the demands of the bureaucracy, free-thinking intellectuals were constantly in danger of giving up their independence and becoming cogs in the machine. “In his desire to be helpful, the intellectual is too frequently compelled to sacrifice what should be his greatest contribution to society: his creativity.” How could the intellectual retain his status as an independent mind thinking outside the box and still function within the government structure? “It is difficult to generalize,” Kissinger concluded, but he urged the intellectual in government to try to maintain his dual role as both insider and outsider by withdrawing

from time to time to his library or his laboratory to “recharge his batteries.” If he fails to do so, he will turn into an administrator, distinguished from some of his colleagues only by having been recruited from the intellectual community.

Kissinger’s was a plea for “artistry” in the making of policy, and this was a concept he retained even after his years in government. In 1978, he told the scholar Walter Laqueur, “Foreign policy is a form of art and not a precise science,” but something, he added, “that some professors have great difficulty grasping.”

WHEN HE accepted Nixon’s offer to become national security advisor, Kissinger probably had in mind the model he outlined in “The Policymaker and the Intellectual.” We know that he hoped to continue to be an intellectual who advised on policy inside the White House while still living in the world of ideas and dealing in theories and abstractions; he expected to be able to avoid short-term problems. That expectation, he quickly learned, was a dream that could be imagined only by someone who had never had the responsibility of governing. Every problem, it turned out, was short-term. There was no time for thinking. “The convictions that leaders have formed before reaching high office,” an older and wiser Kissinger later observed, “are the intellectual capital they will consume as long as they continue in office.” And more lightly in one of his famous quips: “There cannot be a crisis next week. My schedule is already full.” There would be no retreating to the library as long as Kissinger was in Washington, no recharging of batteries. “People,” he wrote, “do not grow in public office.”

Kissinger sent a copy of “The Policymaker and the Intellectual” to his friend Hans Morgenthau “with warm regards.” Morgenthau had his own interest in the collaboration question. The father of realist thinking in America held unorthodox views of Communism, refusing to accept the standard Cold War conviction that Communism was a centrally directed monolith. Morgenthau emphasized differences in culture, history and values, anticipating the Sino-Soviet split, and during the 1960s, he became one of the most outspoken critics of the Vietnam War. But he wasn’t really comfortable with his status as an outsider. Like Kissinger, he was an intellectual who had hoped to burst the bounds of the academic community and leave his imprint on American foreign policy. He may have been acclaimed on college campuses around the country for his classic work Politics Among Nations, but his impact on actual decisions was negligible. He dwelt in the world of theory, which is not where he wanted to be. For all of his intellectual stature, he felt frustrated.