Is a Korean Peace Deal Impossible? 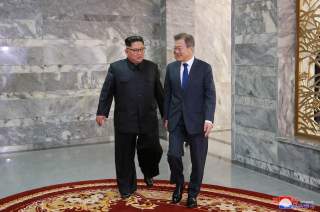 Before accepting a North Korean proposal for peace, U.S. policymakers must think long and hard about what a peace deal would mean in practice. Making a formal peace deal now with North Korea could be a terrible mistake.

Past negotiations with North Korea prove that the Kim mafia often uses negotiations to extract as many concessions as possible before breaking any deal it agrees to. This time, Kim Jong-un appears to be following the same playbook; follow-through even on confidence-building measures like the transfer of remains of soldiers is piecemeal.

The idea of “peace” on the Korean Peninsula is ethereal. It is hard to believe that the two governments competing for control of the Peninsula would significantly drawdown troops or that the North would permanently cease provocations. If little changes, then what is the point? Details should be ironed out.

First, would a peace deal mean that both governments would explicitly give up their goals of reunification on their own terms? North Korea maintains the Committee for the Peaceful Reunification of the Fatherland, and South Korea declared in its most recent Defense White Paper that “‘Establishment of a foundation for peaceful reunification’ is a priority encompassing national security issues.” Even the Panmunjom Declaration called reunification “an enduring aspiration.”

However many “peaceful” adjectives are inserted in front of “reunification,” the reality is that the two vastly different governments uniting as one would require one winner and one loser. As long as reunification is a goal, both governments will maintain militaries to prevent conquest by the other side—and to “reunify” themselves if the opportunity presents itself at a manageable cost.

Reunification under the South Korean government would be the ideal situation in the long-term for the good of humanity, the Korean people and sustained peace and prosperity. But would that be possible if America officially recognized North Korea?

Once trade begins flowing and North Korea’s economy begins to grow, its regime will have some cushion under it, making regime collapse less likely. Modest liberal reforms might follow, but it is unlikely that the fundamental nature of the regime would change. Recognition would allow Kim Jong-un to abuse and extract from Koreans north of the 38th parallel in relative security.

Normalization of relations with China did not occur until after the Cultural Revolution ended. Moreover, the PRC’s large size and clear demographic dominance of Taiwan made recognition inevitably necessary. The same cannot be said about North Korea. There is no reason the United States cannot carry on indefinitely with the status quo.

By contrast, a peace treaty might put pressure on the United States to withdraw troops— substantially or in full—from South Korea. Again, this is a question that is only being referred to vaguely and must be addressed and debated before any such deal is made. But Andrea Berger of the James Martin Center for Nonproliferation Studies and Doug Bandow of the Cato Institute have both stated that troop withdrawal would be a likely outcome of a deal.

Bandow has argued in favor of withdrawing troops. He believes that there would be no need for American troops should peace reign. The possibility of sustained peace with a government that has shelled civilians on islands, torpedoed the ROKS Cheonan and, as recently as 2015, planted mines in South Korea that injured two soldiers is dubious.

This is at a time when the prospects for a peace deal between South and North is at a high point, with progressive president Moon Jae-in, the first South Korean president to meet with the North’s leader since Roh Moo-hyun and a former advisor to Roh, in office. But even Moon’s political capital has been eroding since talks began. His approval rating has dropped from 75.9 percent to 58 percent, one of the lowest in his entire presidency, from mid June to the first week of August. His Democratic Party’s level of support has also declined precipitously—from 55.7 percent before the Trump-Kim meeting to 40.1 percent now.

Korean politics is fickle, but the swing of the pendulum is predictable. Every ten years or so, conservatives tend to swap power with progressives. A peace deal is something that must be enduring. If South Korea is having trouble arriving at a peace deal with the North at the height of progressive power, then that does not bode well for health of a peace regime.

Mitchell Blatt is an editorial assistant at the National Interest , Chinese-English translator, and lead author of Panda Guides Hong Kong. He has been published in The Korea Times , Silkwinds magazine, and Areo Magazine, among other outlets. He tweets at @MitchBlatt.