The Kosovo-Serbia Agreement: Another Step Forward for Trump Foreign Policy 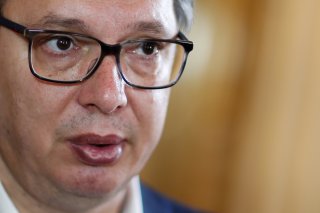 President Donald Trump brought the leaders of Kosovo and Serbia to the White House on September 4 to sign an agreement for economic cooperation. Given the long-standing political disputes that have plagued the West Balkans, this was a remarkable achievement. It was a courageous move by Serbian president Aleksandr Vucic and Kosovo prime minister Avdullah Hothi. It was also a testament to the perseverance of Richard Grenell, the Special Presidential Envoy for Serbia and Kosovo Peace Negotiations, who had been working toward this end-goal since 0ctober 2019. Above all this is one more step forward in realizing Trump’s foreign policy vision.

In particular, the agreement establishes multiple paths for economic development, including expansion of the railway network, potentially reaching a harbor on the Adriatic, reciprocal recognition of professional certifications, and participation in the “Mini Schengen Zone,” to facilitate travel and trade between the two countries as well as Albania and North Macedonia. An especially auspicious component of the agreement is the prospect of working with the Export-Import Bank of the United States and the U.S. International Development Finance Corporation to support large-scale infrastructure projects

The agreement, therefore, lays the groundwork for economic growth in Kosovo and Serbia. The underlying assumption—and the signature feature of administration policy—is this prioritization of growth, prosperity and employment. As people of the region begin to benefit from a new economy, it is increasingly likely that the likelihood that they will resolve political disputes will increase.

Understood merely as a step forward toward improving conditions in the two countries, the agreement is an important achievement that deserves applause in its own right. However, it is in fact much more. The agreement is an important step forward in the foreign policy vision of the Trump administration to improve security in the larger region and to restore U.S. leadership.

The West Balkans has been a soft spot in the security of the architecture of Europe, ever since the break-up of the Yugoslav state. Russia has been playing a destabilizing role, exploiting ethnic and religious ties and deploying its copious disinformation capacities. In addition, the relatively weak economies of Southeast Europe have proven an easy target for Chinese penetration through the Belt and Road Initiative. The European Union as well as individual West European countries, notably France, have sent mixed signals that have not been helpful in the efforts to stabilize peace and democracy. The Kosovo-Serbia agreement puts the United States back in the game of leadership in the region, especially through the prospect of robust infrastructure development.  It also shows, once again, how the Trump administration has been consistently countering Russian malign influence, while the Europeans are just too slow to act.

The ramifications of the agreement go even further. There are critics of the administration who complain of weakened trans-Atlantic ties even though U.S. commitment and engagement with the countries on the eastern flank of Europe, from the Baltics, through Poland to Romania and Bulgaria, and now the West Balkans have only grown stronger in recent years. These are the countries which suffered under Communist rule and have regained their national independence. Trump’s insistence on the importance of national identities and sovereignty finds avid supporters there.

In addition to those formerly eastern bloc countries that well understand the security threat posed by Russia, there is also the case of Greece, which was a hotbed of anti-Americanism until very recently. Now, it is a strong U.S. ally. From the Baltics to the Aegean, and now in the West Balkans as well, there is a chain of American allies, and appropriately so: this administration has recognized the reality that after 1989, the front line to Russia is no longer in the middle of Germany—it has moved to the east, and American strategy is adjusting accordingly. American leadership in the West Balkans, as represented by this agreement, is part of this strategic repositioning.

The agreement also involves dramatic ramifications toward the south, across the Eastern Mediterranean. Serbia has agreed to move its embassy to Jerusalem, alone an important win for Trump policy, given European resistance on this point. Yet Kosovo will be taking an even bolder step, recognizing Israel and planning to locate its embassy in Jerusalem as well. Kosovo will therefore become the first Muslim majority country to locate its embassy in the Israeli capital. These diplomatic developments come on the heel of the rapprochement between the UAE and Israel, itself an effect of the “Peace to Prosperity Plan.” There is an underlying logic between that initiative and the Kosovo-Serbia agreement: the strategic decision to seek out modes of economic cooperation as an alternative to remaining stuck in seemingly intractable political differences. Not that the Palestinians accepted the plan, but it set up a negotiation framework allowing Israel to refrain from annexations as a price for UAE recognition.

Foreign policy is also about values, so it should not be overlooked that the Kosovo-Serbia agreement requires both countries to support the international campaign for the decriminalization of homosexuality. This is remarkable, given considerable cultural conservatism in both countries on this point. On this point, too, credit is due to Grenell who has been the leading advocate for decriminalization. The agreement shows how the pursuit of human rights can go hand in hand with the promotion of economic progress as the distinctive signature of American foreign policy.

All in all, there is an important record of achievements: a win for the peoples of Kosovo and Serbia but also one more step forward in a capacious foreign policy agenda: moving troops to Poland, strengthening U.S. relations in Central Europe, moving toward peace in the West Balkans, diplomatic progress in the Middle East—each on its own vital but taken together, this is a path of foreign policy successes that add up to much more than the sum of the parts.

Russell A. Berman is a senior fellow at the Hoover Institution and Walter A. Haas Professor in the Humanities at Stanford.  He formerly served as Senior Advisor on the Policy Planning Staff of the State Department.