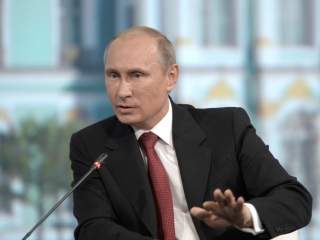 The American national political elite is increasingly vexed, it seems, by Russia and especially its president, Vladimir Putin. Consider the challenge to “fight Putin any time, any place he can’t have me arrested,” issued on social media by Benjamin Wittes, a Senior Fellow in Governance Studies at the Brookings Institution in Washington, D.C., and a black belt in taekwondo. Putin excelled at judo in his youth and is sometimes photographed these days in a white judogi uniform, but Wittes, as he tweeted back in August, said that Russia’s leader is “a fake martial artist. I can take him any time.” It would be easy to dismiss this as theatrics in the service of mockery—except that the State Department’s highest-ranking official on human rights, Assistant Secretary Tom Malinowski, has shared the “fight Putin” challenge on his Facebook page, and both former U.S. ambassador to Russia Michael McFaul and State’s former policy-planning chief, Anne-Marie Slaughter, have promoted the invitation on Twitter. Soon enough the Senior Fellow in Governance Studies was expounding, over the course of a nearly ten-minute interview on NPR’s Here & Now program, about how Putin’s displays of “hypermasculinity” are directly linked to how he “menaces his neighbors” in countries like Ukraine.

At the same time, the Daily Beast has branded as “Putin Bootlickers” those in the U.S. seeking a “new détente” with Russia. And the publication has asked of a group recently cofounded by Stephen F. Cohen, the American Committee for East-West Accord, which has former U.S. senator Bill Bradley and former U.S. ambassador to the Soviet Union Jack F. Matlock Jr. as board members, whether it constitutes “Putin’s New American Fan Club.”

Too much of what passes as reportage and analysis of Russia today indulges in such casual pugnacity, as well as in an eerie glee that caricature is an acceptable, comfortable vehicle by which to explore this nation and its interests. Most worrying, it comes at the precise moment when more thoughtful, measured consideration of the U.S.-Russia relationship is sorely needed.

The backdrop, of course, is an atmosphere redolent of the Cold War: The Pentagon’s alarm about Russian submarines “aggressively operating near the vital undersea cables that carry almost all global Internet communications,” according to the New York Times; Washington’s concerns that the Kremlin intends to check American influence in the Middle East; and NATO’s anxiety that Moscow’s murky role in Ukraine, with its real, but masked, military support for the pro-Russian separatists that have carved out an enclave in the Donbass, might be repeated with a similar operation in the Baltics.

Certainly there is plenty to worry about. But employing labels like “bootlickers” is a way of trying to suppress debate—a rhetorical maneuver, moreover, that can only make it harder for America and Russia to join together on vital matters of common interest, such as combating Islamic militancy, ending the Syrian civil war and keeping Iran from building nuclear weapons. It pays, then, to offer some perspective on how the U.S. might best think about today’s Russia—and to consider whether our attitudes about Russia reflect certain unhelpful habits of mind that make it hard for us to see Russia clearly.

In the first place, the fixation with Putin’s character and with how Putin is presented to the Russian public (bare-chested with a rifle in hand, etc.) is a distraction. Perhaps he truly is “a bully,” as Jeb Bush has called him, but it is an elementary mistake in the analysis of any nation-state to attribute its behavior simply to the personal makeup of its leader, even a very powerful leader. In “The Accidental Autocrat,” a profile of Putin published in the Atlantic in 2005, I suggested that his rule was “re-enacting distinctive Russian political traditions.” Former secretary of state Henry Kissinger, in his 2014 book, World Order, situated Putin within the mainstream of Russia’s traditional approach to the outside world. “Its policy has pursued a special rhythm of its own over the centuries, expanding over a landmass spanning nearly every climate and civilization, interrupted occasionally for a time by the need to adjust its domestic structure to the vastness of the enterprise—only to return again, like a tide crossing a beach,” Kissinger wrote. “From Peter the Great to Vladimir Putin, circumstances have changed, but the rhythm has remained extraordinarily consistent.”

To acknowledge this, though, is not to say that an expansionist-minded Russia never settles for peace—Tsarist Russia was a key part of the Congress of Vienna of 1814-1815, the most durable peace ever created for Europe. Today’s broad-brush critics of Russia and of those in the United States (Bootlickers!) advising engagement with Russia tend to be in denial, or perhaps are willfully ignorant, of how certain post-Cold War U.S. policies have contributed to a Russian sense of insecurity. The great issue in this respect is NATO expansion, which began in the 1990s, with Russia on its knees, and under George W. Bush added to the alliance the former Soviet Baltic republics, on Russia’s borders. George F. Kennan, the father of containment and American’s most astute analyst of Russia ever, called this policy “a tragic mistake” back in 1998. “I think it is the beginning of a new cold war,” he said. “I think the Russians will gradually react quite adversely and it will affect their policies.”

With the collapse of the pro-Moscow Viktor Yanukovych government in Kiev in 2014, and its replacement by a pro-Western regime, of course the Kremlin felt anxious that Ukraine, seen by Moscow as the cradle of Russian Orthodox culture, might be next on the NATO expansion agenda. Washington should have anticipated this worry—especially considering Moscow’s already-proven willingness to go to war, with Georgia in 2008, to keep another former Soviet Republic from joining NATO. Given that warnings on expansion went unheeded, it seems fair to ask, are there those in the U.S. national political elite who desire a new cold war? It may seem a strange question—there is no one giving active voice to such a longing. And yet a felt need can be a kind of conditioned reflex. Nations, like people, think in familiar patterns: Imagination, or better, reimagination, is hard to come by. The Cold War shaped several generations of American policy makers and established an enduring national popular culture, seen in bestselling novels and Hollywood blockbusters (see today’s Bridge of Spies), depicting Russia and Russians as duplicitous and menacing. This mind-set seems as good as explanation as any for the strange comment of Mitt Romney during the 2012 campaign—his assertion that Russia was, “without question, our number one geopolitical foe. They fight every cause for the world’s worst actors.” A greater foe than the Islamic jihadists that target our homeland and a revolutionary regime in Tehran that has embraced “Death to America” as its legitimizing slogan?

Just as it has proved difficult to think past the Cold War, it has been difficult for America’s leadership class to grasp that “the unipolar moment,” as Charles Krauthammer, in 1990, called “the immediate post-Cold War world,” with America as “the unchallenged superpower,” was not apt to endure. Indeed, even that supposed moment was something of a fiction, since at that time, China, twelve years into the economic reforms launched by Deng Xiaoping, was already well along on its path to becoming a great power. The reality, in any case, is that the geopolitical world today is a decidedly multipolar one. And in the hot theatre of the Middle East, multiple outside powers, including Russia, have core interests.

Russia’s interests can be seen in its new military campaign in Syria to keep the Bashar al-Assad regime from collapsing. For one thing, the Kremlin is acting, not simply to embarrass a dithering Washington, but to preserve the Russian Navy’s use of the port of Tartus on the Syrian stretch of the Mediterranean. The Kremlin negotiated access to Tartus in 1971, in the Brezhnev era, and with no other Mediterranean facility available, Russia will not give up Tartus lightly. Russia also has an interest in taking the battle directly to Islamic fighters in Syria and across the border in Iraq. Jihadists from Russia, after all, are among those aiming to overthrow the government in Damascus and maybe also the one in Baghdad. “For Vladimir Putin, it makes much sense to pin down and kill as many of these enemies as possible now before their anticipated homecoming,” Dmitri Trenin, director of the Carnegie Moscow Center, recently noted in Tablet.

The “tragic mistake,” in this instance, might be the failure of the U.S. and Russia to realize their joint interest in cooperating to thwart the jihadists that threaten their respective homelands. Since he first came to power, at the end of 1999, Putin has been alive to the possibilities of collaboration. After 9/11, he agreed to U.S. and NATO flights over Russian airspace to assist in the campaign in Afghanistan and acquiesced to new U.S. bases in former Soviet Central Asia. In today’s Syria, the triumph of radical extremist combatants, funded by the likes of Saudi Arabia, would be a bad outcome for Russia and America alike, not to mention France and the rest of Europe. But with Washington hampered in its ability to talk to Tehran, “Moscow is better situated to move Iran, Turkey and the Persian Gulf monarchies toward compromise,” Vali Nasr, dean of Johns Hopkins School of Advanced International Studies, recently suggested in Politico.