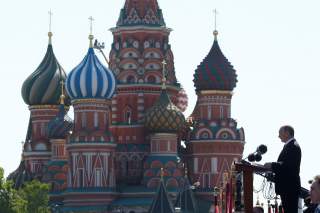 It’s 2018 but you’d think it was 1951. Pundits talk of a “new Cold War” between Moscow and Washington and Americans level of concern vis-á-vis Russia has hit its highest level in the post–Cold War I era. Back in 2014 Paul Saunders argued that a “new Cold War” would look quite a bit different from the conflict that defined the latter half of the twentieth century. At the core of Saunders argument is a fact that security analysts largely agree on: Russia is weak. Ben Heineman, Jr. at Harvard Law and the Center for Strategic and International Studies has emphasized that Russia’s fertility rates (death rates currently exceed birth rates) will create dire economic and cultural repercussions for the Kremlin. Ashleigh Garrison and Kelly Song at CNBC have characterized Russia’s sluggish and oil-dependent economy as Putin’s “Achilles heel.” Andrew Kramer has highlighted that Russian economic deterioration is likely to accelerate as the ruble is choked by the tightening noose of U.S.-led economic sanctions. These trends are striking, and Americans would do well to remember the fragility of the Russian state and Putin’s regime when gorging on wall-to-wall coverage of malicious Kremlin-sponsored activities. However, Saunders analysis adds that twenty-first century geopolitical dynamics (namely the acceleration of globalization and technological advancement) have made it easier for comparatively weak states to have an outsized effect on international affairs - potentially giving the Kremlin an edge.

But there’s a long-term security dynamic that Saunders and many other experts overlook: climate change. I remember thinking about this last fall when I was sweating bullets in Moscow on an October day that was hotter than any October day anyone could have imagined in 1951. I was in Moscow to see the sites, but as a young congressional staffer and researcher focused on long-term security dynamics, I couldn’t help but notice that the Moscow Marriott was playing host to a conference of nuclear-security experts from around the globe. The gathering of (almost exclusively white and male) experts to talk about an increasingly antiquated issue perfectly illustrates the global security establishment’s continued reluctance to grapple with the geopolitical challenges of the future.

Politicians and the experts that advise them are often focused on security in the short-term. What is threatening now? What do I need to look tough on now? How can I prove that I have more tact than my opponent before the next election? But as a college-student I’m focused on how long-term dynamics will affect me, my kids and my country fifty years down the road. These issues are my issues; in 2050 (when many of the decision makers of today are six feet under and my kids are graduating high school) 150 million people—almost 10 percent of the world's population—are estimated to be displaced by climate change. The experts in the Moscow Marriott would have been better off talking about the weather and my sweaty forehead.

The changing climate will wreak havoc on the international system and while the United States and its allies face tremendous potential economic and political damage, Russia is likely to be insulated from these dire effects and, in fact, it may benefit as the world warms. Propelling the Kremlin’s comeback won’t be a “Cold War” mentality. Instead, heat, specifically climate change, may drive a Russian resurgence.

First of all, most Russians will be shielded from the primary effects of climate change because of the country’s geography. Many of Russia’s major urban centers are inland, decreasing its exposure to coastal flooding while adversarial superpowers are far more susceptible. The countries at highest risk are islands and low-lying nations in Southeast Asia but coastal areas in Europe and North America will be hit hard, too. Even a modest 18-inches of sea-level rise is estimated to displace 14.2 million people in the United States alone, more than 4 percent of the current U.S. population. On the other hand, only 1.86 million Russians are expected to be displaced under the same conditions, less than 1.3 percent of that country’s population.

Some people would argue that the strength of the American economy will allow Washington to better respond to climate disasters compared to the meager response Moscow will likely be able to muster from its significantly smaller pool of resources. Fair. But Russia may soon have many more resources to work with.

The thawing of the Arctic Sea could also create tremendous benefits for the Kremlin. A study by the U.S. Geological Survey estimated that 30 percent of the world’s untapped natural gas and 13 percent of untapped oil reserves are trapped in the Arctic, right in Putin’s backyard. As the ice thaws and research and development improves, the cost needed to extract those materials will shrink significantly and offer a potential economic boom for Russia.

In addition, as ice melts in the Arctic Sea, a shipping route from Russia’s Northern coast to East Asia will develop. The implications of this new global trade route are hard to understate; Chinese exports to Europe would likely travel through Russia, giving Moscow currently unimaginable economic leverage over NATO adversaries in Eastern and Western Europe. The new route could also be a central tool for Russia as it attempts to diversify its ailing economy that has struggled to transition from oil and arms dependence. This threat is having a tangible impact now: in 2017, a Russian tanker completed its first pass through the Arctic Sea without an icebreaker.

As Giuseppe Agliastro at the Italian daily La Stampa has noted, climate change has the potential to transform Russia into an “agricultural superpower” as huge swaths of Russian territory morph from uninhabitable frozen tundra to fertile land. The warming climate could also make Russia a more attractive tourism destination, further aiding the Kremlin in its quest to diversify the domestic economy.

These economic boons may give Moscow the means to muster a robust response to the negative effects of climate change.

Other analysts who are skeptical of the changing climates effect on the United States ignore the fact that migration is an instigator of political instability. Take Syria. The refugee crisis stemming from that horrific conflict has polarized European and American political parties. Russian interests are bolstered by the destabilization of Western political institutions because domestic political squabbling draws attention and resources away from combatting the Kremlin’s activities. Russia also benefits from its authoritarian political system because, as a de facto single-party state, it’s not subject to the kind of polarization that plagues its adversaries. These dynamics will intensify as global climate displacement accelerates.

Russia has proven that it is able to exploit domestic divides to weaken Western institutions and further its own agenda. Western democracies have been dramatically weakened by a few hundred million dollars worth of unsophisticated cyber-weapons. Imagine the advantages that the Kremlin could reap from the political and economic instability caused by a global refugee crisis.

Rising seas could also spell catastrophe for the United States’ ability to project power around the world and may force Washington to deprioritize containment of Russian aggression. A 2018 Department of Defense analysis found that nearly half of America’s more than three thousand military installations are in danger of significant damage from extreme weather. Rebuilding or relocating those bases would be exorbitantly expensive and domestic spending is already predicted to soar (America’s debt-to-GDP ratio is expected to double in the next thirty years and it is already sky-high). Strategists need to accept the reality that the United States is likely to be forced to reduce its military commitments abroad, creating long-term opportunities for Russia.

It is possible that the international community will step up to the plate on climate change. But it is very difficult to build the global political capital needed to take meaningful action because of the diffuse, slow-developing, intangible and long-term nature of the problem. Even if world leaders had a kumbaya moment on climate, many of the costs for the world and benefits for the Kremlin are “locked in” because of the changes that have already occured.

As the world grows warmer and the global political sea churns with instability, many ships teeter on the verge of sinking, but the Kremlin is well-positioned to ride the high tides to economic revitalization and strategic resurgence. That should be enough to cause anyone to sweat through a (warming) Russian winter.

Chas Goldman studies International Politics in the Edmund A. Walsh School of Foreign Service at Georgetown University. He has written previously about U.S.-Russia relations and political dynamics in the former Soviet-Republics.