Kurdistan Isn't Ready for the Coronavirus 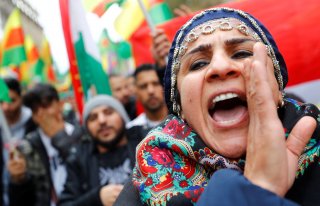 Across the Middle East, countries are bracing for the full impact of the coronavirus pandemic. Some analysts warn that the region could be on the verge of a wave of disruption greater than the Arab uprisings. Authorities in many countries lack the capacity to shield their populations from the worst of the virus. This is particularly true in the Kurdish Region of Iraq (KRI) and Northeast Syria (NES), two semiautonomous regions where a series of factors conspire to hamstring the response.

While the number of confirmed cases of the coronavirus in both semiautonomous areas remains relatively low, there is good reason for concern. In Iraq, the World Health Organization has confirmed 1,677 cases of the coronavirus. Just over 341—or one-quarter of the cases—are in the KRI. Early on, Iraqi Kurdistan went into lockdown. Schools and universities closed their doors and the authorities instituted self-quarantine, social-distancing measures and a daily curfew. Movement into and out of KRI is highly restricted.

Just across the border in Syria, forty-two cases have been confirmed. In the northeast of the country, there are reports that a fifty-three-year-old man died earlier this month from the coronavirus. The self-administration has instituted curfew restrictions, closed nonessential businesses, and canceled public gatherings. The local authorities in both regions may have reacted quickly. However, they must contend with three “underlying conditions” that make their regions particularly vulnerable to an outbreak.

First, the Kurds in both regions are already grappling with significant humanitarian and displacement crises. In Iraqi Kurdistan, a population of just over 5 million hosts 1.5 million displaced Iraqis and Syrian refugees. Most of the population lives in host communities but almost a third of the population is spread across almost forty camps where the population is particularly vulnerable. Movement restrictions have cut the delivery of aid to the displaced. Now, food insecurity is on the rise. In Northeast Syria, there are over 460,000 internally displaced—roughly 200,000 of whom are living in camps or collective shelters. Overall, 1.65 million people are in need of humanitarian assistance.

Second, both KRI and NES are recovering from the battle against the Islamic State and, in the case of the latter, still in the midst of conflict with a northern neighbor. In Iraq, Peshmerga fighters played an essential role in pushing back the terrorist group. In Syria, Kurdish fighters served as the backbone of what became the multiethnic local partner force for the international coalition campaign against the Islamic State. Last October, Northeast Syria was once again rocked by war. In early October, Turkish President Recep Tayyip Erdoğan launched an invasion of northeast Syria, displacing more than 200,000 people. Turkey and its Syrian proxy forces now control a swath of territory along the border.

Despite the coronavirus outbreak, Turkey-backed forces continue to mount attacks on the Kurdish-led Syrian Democratic Forces and the Syrian government troops. In March, clashes raged around Tell Abyad, Ain Issa, and Tell Tamer. April also saw an uptick in violence. In addition, Turkey has shut off the main water supply for much of the al-Hasakah region. The move has impacted some 460,000 people who are now challenged to conduct even the most basic measures like handwashing to flatten the curve.

Third, both semiautonomous regions have a complicated relationship with the central government in their respective countries that may leave them to fend for themselves. In 2017, the KRI referendum triggered a military response by the central government. While relations have improved significantly in the intervening years, it is far from clear that Erbil can expect significant support from their colleagues in Baghdad.

In Syria, the Assad regime takes a dim view of Kurdish aspirations for greater autonomy. However, Damascus has been largely prohibited by the exigencies of the war from moving against what has become a multiethnic self-administration in the northeast of the country. In January, Russia strong-armed the United Nations Security Council into closing the UN cross-border mechanism that allowed aid to enter in the NES from Iraq. The UN estimates that the closure could impact up to 1.4 million people, with particularly damaging consequences for the health sector.

The upshot is that humanitarian assistance for the NES must now be largely routed through Damascus. Unsurprisingly, officials from the self-administration warn that little of this aid arrives in their region. Syrian Democratic Council Representative to the United States Sinam Mohammed recently reiterated this warning: Even amid the pandemic “most of the aid sent to Damascus remains there, and [little] arrives to our region.” Indeed, there are reports that health workers in the northeast have been forced to make protective gear out of garbage bags.

So how does one begin to prepare the Kurdish regions of Iraq and Syria for a coronavirus pandemic?

Interestingly, there are signs that the two regions are finding ways to help themselves. On April 9, Erbil dispatched medical equipment for two coronavirus testing labs, as well as training staff, to Northeast Syria. This is an important first step and there is talk of additional support to follow but more outside aid also will be needed. Both regions want a seat at the table as donors and aid agencies plan that aid. KRI representative Bayan Abdul Rahman recently observed that sub-sovereign entities “need to be recognized and they need to be consulted and they need to be included” in the coronavirus response.

For its part, Turkey should heed the UN Secretary-General’s call for a global ceasefire and end attacks in Northeast Syria. In addition, other members of the UN Security Council should pressure Russia to reopen the cross-border aid mechanism in June when the UN resolution comes up for a vote. Finally, in coordination with Baghdad, donors should flow additional assistance to combat the pandemic directly into Erbil with the understanding that it will be used to help vulnerable populations on both sides of the border.

Hardin Lang is vice president for programs and policy at Refugees International. He is a veteran of six United Nations peacekeeping and humanitarian field missions. Follow him on Twitter @HardinLang1.