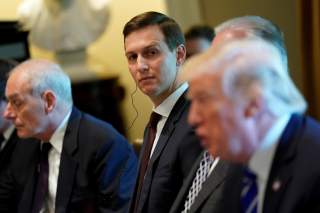 Jared Kushner’s secret October visit to Saudi Arabia continues to engender considerable controversy. The president’s son-in-law seems determined to find the holy grail that is a Middle East peace agreement, come what may. As the billionaire Trump ally Tom Barrack told Politico, “Jared has always been driven to try and solve the Israel-Palestinian dispute. The key to solving that dispute is Egypt. And the key to Egypt is Abu Dhabi and Saudi Arabia.” President Trump himself has long touted his ability to cut a deal and clearly sees bringing about Middle East peace as the ultimate prize—one that has eluded his predecessors but that he can deliver.

But whether Kushner actually has the skills to carry out such a delicate mission—and to succeed where far more seasoned diplomats have failed—is highly questionable. What exactly occurred during Kushner’s meetings is open to dispute, but his critics are alleging that he gave Crown Prince Mohammed bin Salman a green light to launch his intra-family purge and offered the impression that the administration had no problem with Crown Prince Mohammed’s decision to jump into Lebanon’s complex political landscape by apparently instigating Prime Minister Saad Hariri’s resignation (which the Lebanese now seems to have recanted).

Kushner may be trying to secure a major Middle East peace deal, but it is unclear whether he recognizes that both the Saudis, whom he seems to hope will take the lead in the Arab world to pressure the Palestinians, and the Netanyahu government, with whom he identifies, have agendas of their own that are not necessarily in America’s interest.

Signals coming from Riyadh indicate that the crown prince hopes that the Israelis will attack Hezbollah in order to deal a severe blow to Iran’s expansionist policies in the region. It is understandable why the Saudis would desire an Israeli attack. Riyadh feels threatened by Iranian encroachment and by Hezbollah’s increasing military activity on Tehran’s behalf. Hezbollah’s minions have played a key role in sustaining the Assad regime in Syria and are known to be working alongside the Houthis in Yemen. In both cases Hezbollah is doing Iran’s bidding.

The Saudis are enmeshed in a war with the Houthis that seems to be going nowhere. They continue to pressure Qatar with a blockade because of the tiny state’s alleged support of Hamas and the Muslim Brotherhood. They maintain a constant watch on developments in Bahrain, where in 2011 they sent troops across the causeway from their eastern province to quell the instability that threatened to bring down the ruling al-Khalifa regime. These commitments have already stretched Saudi military resources; Riyadh is in no position to go after Hezbollah on its own. Israel is its deus ex machina.

But Bibi Netanyahu has his own calculations. The State’s Attorney is investigating him in connection with two separate corruption allegations, and the prime minister is linked to a third involving the Israeli purchase of submarines from Germany. Netanyahu’s allies are desperately working to prevent their leader from being indicted. They are even attempting to pass legislation that would prohibit the police from summarizing and making recommendations in high-profile investigations, which are accompanied by a state’s attorney, and which would legally prevent the police from recommending that Netanyahu be indicted.

The link between Crown Prince Salman’s aspirations regarding Israel and Hezbollah and Netanyahu’s troubles appears to be Kushner’s attempts to broker a Middle East peace. The Saudis might be willing to go along with a peace initiative if the Israelis were to attack Hezbollah. And Netanyahu, who in the past several years has avoided any real involvement in a peace negotiation, might be willing to participate if, as one of his leading political rivals told me, “it would help him convince the public that now is not the time to indict, much less replace, the Prime Minister.” Indeed, Al-Monitor is also reporting that Netanyahu is likely to look favorably on an American peace plan in the hopes of boosting his domestic political fortunes. The idea seems to be that regional cooperation, particularly with Saudi Arabia, is supposed to lead to Israeli-Palestinian cooperation.

There can be no question that the last thing the United States needs at present is another major conflict in the Middle East. An Israeli attack on Lebanon, with the Syrian, Yemeni and Libyan civil wars still raging, with Iraq very much unsettled, and with both Russia and Iran’s increasing influence in the region—at the expense of Washington—would surely tax America’s already anemic diplomatic resources. Moreover, a new Lebanese war, which could also provoke another civil war between Hezbollah and the other religious communities that bitterly resent it, could drag in the U.S. military, as was the case in both 1958 and 1982.

Fortunately, the Israelis have no current interest in attacking Hezbollah, just as the terrorist organization is biding its time before provoking another conflict with the Jewish state. Israeli reluctance is causing Saudi frustration, however. Absent an Israeli attack on Hezbollah, there appears to be little incentive for the Saudis to press the wily Palestinian leader, Abu Mazen, to engage in peace talks with Jerusalem. Without the Arabs, led by Saudi Arabia, taking the first step, it is unlikely that Netanyahu would be prepared to provoke his supporters in the settlers’ movement by taking the initiative to start a new round of peace negotiations. He can be relied upon to seek some other way to avoid indictment.

Little of the foregoing seems to have entered Kushner’s mind. The complexity of the region suggests that President Trump needs someone who possesses not merely influence in the White House but also deep experience as his principal emissary. If the latest press reports are anything to go by, Kushner is already lowering his public profile in the White House. That is not enough. It is time he also took a step back from meddling in the Middle East.