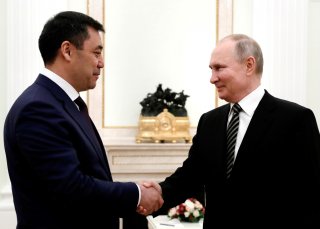 Did Russian president Vladimir Putin discuss plagiarism with Kyrgyz president Sadyr Japarov on his May 24 visit to Sochi? However unlikely, he probably should have, given that the new president has been copying Putin’s playbook since coming to power in January.

In Putin, Japarov has found a model for consolidating power and an authoritarian idol to emulate. Japarov is well on his way to capturing what was Central Asia’s only democracy and has done so by quickly and callously employing Putin’s authoritarian tactics.

Much like Putin, Japarov has used the façade of democracy to retrofit the country’s institutions to suit his interests. In April, Japarov’s amendments to the Kyrgyz constitution passed a public referendum, allowing the president to serve two terms instead of one, cutting the number of lawmakers in parliament by 25 percent, subordinating the judiciary under the executive branch, and creating a new consultative assembly controlled by the president.

Putin passed a similar package of constitutional amendments by public referendum last June that centralize his power and effectively keep him in office until 2036.

To Japarov, whose country has witnessed three revolutions since its independence from the Soviet Union in 1991, Putin’s brazen attempts to cling to power are a model for stabilizing his own rule. Recently, Japarov has also seized on the Kremlin’s wanton harassment of political opponents. On May 8, Kyrgyz authorities arrested an outspoken opposition politician for “organizing mass disorder” at the same October 2020 anti-government rallies that brought Japarov to power.

Japarov campaigned for president as a populist and vowed to rule Kyrgyzstan with the strong hand of the “Khans” that dominated Central Asia centuries ago. As president, he has continued to feed rising nationalism around the country by talking openly about the land swaps with Uzbekistan and Tajikistan. Some experts believe that his populist rhetoric stoked tensions on the Kyrgyz-Tajik border that exploded into violence in late April.

That line of argument looks plausible. Though Kyrgyzstan and Tajikistan agreed to a ceasefire on May 1, Japarov says he plans to go ahead with repairs to a water intake station that set off the initial confrontation. Indeed, simmering conflict with Tajikistan contributes to the national populist mood that Japarov has profited from so far. He knows his mandate is still fragile and needs public backing long enough to build out his authoritarian regime.

His plan seems to be working. Kyrgyzstan has the most independent media in Central Asia, yet its news sites, Telegram channels, and Twitter feeds have been awash in nationalist rhetoric in the wake of the clashes.

Japarov’s inflammatory moves echo the fundamental elements of Putin’s own brand of nationalism, which seeks to repackage Russian history as a means of legitimizing his rule. He has skillfully painted himself as the protector of Russia’s “1,000-year history” and waxed lyrical about returning Russia to the greatness of the Soviet Union.

He uses his dubious concept of a “Russian world” to explain to domestic audiences that his reckless wars in Ukraine and Georgia are in their interests, rather than the products of naked geopolitical ambition. These conflicts have given Putin temporary spikes in popularity, enough to maintain enthusiasm for his mandate as he has brought Russian institutions under his thumb and ended pluralism in the country. Japarov, too, sees the utility of using conflict and nationalism to distract from and excuse his abuses of power.

Japarov also seems to admire Putin’s near-total cooption of private enterprise into his regime. On May 17, Kyrgyz authorities seized the Kumtor gold mine, the country’s most significant economic asset, from Canadian company Centerra Gold. The previous week, a Kyrgyz court fined the company $3 billion for alleged violations of environmental rules. But Japarov is not worried about spooking foreign investors. For him, the rents and influence he can extract from the mine’s nationalization far outweigh its economic value.

Here, too, Putin appears to have inspired Japarov. One of Putin’s most important moves as president was to take control of the state oil company Gazprom and force out foreign firms in the process. The subversion of Gazprom, along with many of Russia’s other natural resource extraction companies, has earned Putin billions of dollars in rents. It has also won him the fealty of the business and political elites that operate these companies on his behalf, a status that Japarov covets in Kyrgyzstan.

And yet, Putin has not been flattered by Japarov’s imitation of him. He does not yet trust Japarov and has held him literally at arm’s length, even as Moscow struggles to attract allies.

Putin invited Tajik president Emomali Rahmon to Moscow for Victory Day celebrations but conspicuously did not invite Japarov. In his meeting with Rahmon, Putin pledged support for Tajikistan and promised to strengthen its armed forces, under the guise of promoting stability on its border with Afghanistan. Putin waited another two weeks to meet with Japarov and merely advocated for “a long-term solution” at the Kyrgyz-Tajik border.

There may also be good strategic reasons for the Kremlin leader to freeze out Japarov. In countries where Putin has minimal extraterritorial ambitions, he values stability above all. And Kyrgyzstan has been the most chaotic of Central Asia’s five states; Putin does not want to back Japarov for fear that popular protests could once again break out against a sitting Kyrgyz president. This approach allows the Kremlin to save face for the time being and gives Japarov a significant incentive to consolidate his power and join the region’s club of authoritarians.

Putin seems to be signaling to Japarov: “Strengthen your mandate, weaken your rivals, and remove instability—then we’ll talk.” The diligence with which Japarov has followed Putin’s authoritarian model suggests he is looking forward to that prospect.

Andrew D’Anieri is a program assistant at the Atlantic Council’s Eurasia Center. He tweets @andrew_danieri.