A Lack of Humility Is Killing U.S. Foreign Policy 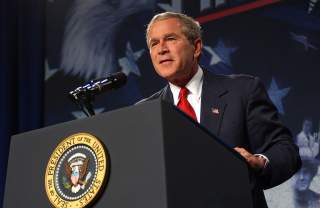 WHETHER FIRST uttered by baseball player Yogi Berra, Danish physicist Niels Bohr, or someone else, it is true that “it is difficult to make predictions, especially about the future.” Even so, scholars, pundits and policymakers are still eager to jump into the prediction game. This is not surprising, given the very human desire to know what the future will hold. People are curious, they want to be able to plan and they struggle to avoid the predicted “future” by bending or breaking the expected arc of history. But prediction is also foolhardy when it comes with some illusion of control or lacks a large dollop of humility.

Therefore, rather than aiming to predict a specific event or problem that will pose the greatest challenge to the next president, I submit that the biggest potential problem is our general lack of humility about our knowledge and our ability to foresee and control events around us. This will be especially dangerous in the realm of foreign policy, given that the Washington foreign-policy elite has been hobbled by such hubris since the end of the Cold War. Recall Secretary of State Madeleine Albright’s breathtaking claim on the Today show in March 1998: “If we have to use force, it is because we are America; we are the indispensable nation. We stand tall and we see further than other countries into the future, and we see the danger here to all of us.”

This view wasn’t anomalous. It has been a fundamental operating assumption of the bipartisan foreign-policy establishment that has supported a grand strategy of liberal hegemony for decades. Albright’s perspective—shared widely by the Washington elite—has been tested repeatedly during the last fifteen years, and each experiment has yielded one failure after another. Thinking we could “see further” led the United States into the streets of Mogadishu, the sands of Iraq and the poppy fields of Afghanistan. It also emboldened Washington to take out leaders in Iraq and Libya in order to make a better world, and it encouraged the conceit that “government in a box” could be brought to places like Helmand, Afghanistan. But these well-intentioned efforts all ended up, as retired Gen. Stanley McChrystal described that last folly, as bleeding ulcers.

There has been too much certainty in Washington that aggressive engagement abroad can make America safer or expand its power and values. The U.S. military can effectively hit targets and depose dictators, but has a hard time answering the fundamental question of “What comes next?” Moreover, there has been too little consideration of unintended consequences, the constraints of the world (such as human nature, nationalism and the difficulties of projecting power far from home), and the full costs (human and financial) of American actions.

Unfortunately, the problem runs deep and will be difficult to correct. If America is ever going to stop making mistake after mistake rooted in hubris about what U.S. foreign policy can actually deliver, the country needs a new mental model. It needs to adopt a more realistic mind-set about the limits of power and knowledge, and a new grand strategy consistent with that framework.

A good first step in the development of this new approach would be to turn to a different set of thinkers than those who have dominated policymaking over the last fifteen to twenty-five years. President-elect Trump needs to recall what he said in his first major foreign-policy speech (at the Center for the National Interest); namely, that he would

look for talented experts with new approaches and practical ideas, rather than surrounding myself with those who have perfect resumes but very little to brag about except responsibility for a long history of failed policies and continued losses at war.

The country needs people in key government and think-tank positions who appreciate the knowledge problem and the “fatal conceit.” In other words, America needs more voices who have internalized the wisdom in University of Texas professor Eugene Gholz’s question about policymakers: “How can they understand the rise of ISIS if they don’t understand the rise of Donald Trump?”

Fortunately, the American people are yearning for a fundamental change in how they engage with the world. This is evinced in part by President-elect Trump’s challenge to Republican establishment thinking on foreign policy in the primaries and more than living to tell about it. Recall that Trump went right into the heart of military-friendly South Carolina and declared,

Obviously, the war in Iraq was a big, fat mistake. . . . George Bush made a mistake. We can make mistakes. But that one was a beauty. We should have never been in Iraq. We have destabilized the Middle East.

But perhaps more telling about the specific state of public opinion on foreign policy, a recent Charles Koch Institute/Center for the National Interest poll suggested a wary public desire for greater prudence abroad. It found that only 14 percent of registered voters in the United States believe the country’s foreign policy has made them safer since 2001. A majority, meanwhile, believes that both the United States and the rest of the world are less safe today as a result of the nation’s foreign-policy choices in that period. Only 25 percent of American voters believed that the next president should expand the use of the military abroad, while 51 percent feel that the next administration should use the military less than it has since 9/11.

In short, the potential problem is a lack of American humility. A shift towards realism holds the answer.

William Ruger is vice president of research and policy at the Charles Koch Institute and a research fellow in foreign-policy studies at the Cato Institute.