The Last Days of Netanyahu 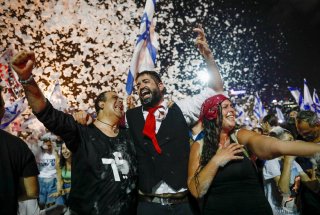 The long and divisive reign of Benjamin Netanyahu, the dominant Israeli politician of the past generation, officially ended on Sunday night. Netanyahu fell but did not suffer a political demise. His defeat was by the narrowest possible margins.

Naftali Bennett replaced him as prime minister, taking power at a delicate moment in Israel’s history. Yair Lapid, a centrist leader and the new foreign minister, is set to take Bennett’s place after two years. Bennett and his partners pieced together a coalition from across the political spectrum, including an independent Arab party for the first time in Israel’s history, after Netanyahu failed to form a government following the most recent vote in March.

The one force that unites the coalition, an antipathy toward Netanyahu, is fading now that the coalition has power and responsibility. The new Israeli government will focus on restoring Israel’s traditional approach of seeking bipartisan American support, after years of tension with American Democrats. In a statement, President Joe Biden noted that he looked forward to working with Bennett to strengthen all aspects of the close and enduring relationship between the United States and Israel.

“Thank you Mr. President!” Bennett replied on Twitter. “I look forward to working with you to strengthen the ties between our two nations.”

In his earlier speech to Parliament, however, Bennett hinted at disagreements to come, promising to continue Israel’s opposition to forging a new nuclear deal with Iran.

Also, Israelis are concerned with domestic issues: can the fragile and diverse ruling coalition survive? Will it accomplish any of its bold domestic reform Agenda, from confirming judges to spurring economic growth?

The different parties have indeed deep ideological differences, But they have said they wouldn’t try to solve major pre-existing issues and instead focus on improving the everyday lives of Israeli citizens. However, the most important issue is a simple fact: For the first time since Israel’s formation in 1948, elected Arab leaders have not only lent their votes to a governing coalition but joined it. Traditionally, Arab parties have not been directly involved in Israeli governments. They have been largely rejected by other Israeli parties or they believed that their own voters wanted opposition, elegant dissent, and not to participate in the compromises of democracy.

After decades of political marginalization, many Palestinian citizens living west of the “green line,” who make up one-fifth of Israel’s population, have sought fuller integration. This is an enormous, historic shift that deserves more attention. If Arab political parties can join Israel’s governing coalition, then only months after a number of Arab governments from UAE to Morocco made peace with Israel, the deep currents in Arab politics have changed. This opens the door for discussions toward lasting peace. Also, the weakness of the new coalition might be a strength in seeking peace. The coalition is unlikely to make any meaningful concessions to the Palestinians, which the United States and its allies are eagerly seeking. What it can do is focus on meeting the needs of the Arabs that live in Israel by improving schools, hospitals, housing, and jobs.

That responsibility, therefore, rests with Yair Lapid, a moderate voice who has shown remarkable political skill in inspiring the coalition and holding it together. He has also shone brightly in helping solidify Israel's most important relationship, the one with the United States. Benjamin Gantz, an Israeli politician and retired army general who enjoys deep respect in Washington and beyond, is also playing a vital role. Together, these two men can be important catalysts in government.

One thing to watch is how the coalition treats its new Arab partners. Beyond commendable words and common interests, if the coalition provides tangible benefits to Israel’s Arabs, it will encourage deeper trust and participation in democratic politics.

The road is long, it takes patience, courage, and vision. Still, this coalition is holding the lightning of history in its hands.

Ahmed Charai is a Moroccan publisher. He is a board director of the Atlantic Council and an International counselor of the Center for Strategic and International Studies and an Advisory Board of The National Interest Center in Washington.