Lavrov in Washington: Can America and Russia Work Together? 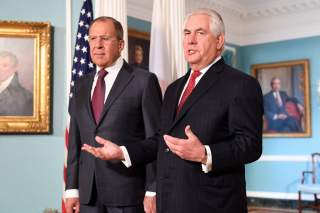 Russian foreign minister Sergey Lavrov picked an inauspicious time to visit Washington. Starting with the increasingly crass and distasteful assertions by American comics that President Donald Trump is beholden to Russian president Vladimir Putin, continuing with hearings on Capitol Hill examining the “Russian hacking” of the 2016 elections and ongoing assertions that meetings with the Russian ambassador are somehow tantamount to treason, and culminating in the dismissal of FBI Director James Comey, the U.S. political outrage machine has fixated on two recurring talking points: (1) Donald Trump is a Kremlin puppet, and (2) Russia has been “rewarded” by having its foreign minister travel to Washington and to be received by the president.

The fact that the Trump administration has offered no concessions to Russia on any issues that matter greatly to the Putin administration—whether on the deployment of NATO forces to the Baltic states, continued moves to solidify missile defense systems, or even offering a waiver for Exxon to drill with Russian state oil company Rosneft in the Black Sea—and has even taken steps that Moscow opposes, such as the cruise-missile strike against the Syrian government last month, seems not to matter. As a Russian participant on the sidelines of a U.S.-Russia-Europe dialogue held at the Kozmetsky Center at St. Edward’s University sarcastically remarked to me a few weeks ago, if Trump is indeed a “Russian puppet,” the Kremlin must be extraordinarily inept at pulling the strings. And no matter what one thinks of Vladimir Putin, the fact is undeniable that Russia remains a major player on the world stage. Meeting with the Russian foreign minister is not a reward graciously bestowed by Washington as a seal of good behavior, but a necessity given the crises in the Middle East and on the Korean Peninsula, and recent upticks in fighting not only in eastern Ukraine but also in Nagorno-Karabakh.

The world cannot wait for the U.S. comedic and political establishments to finish up their focus on Putin to allow for some semblance of a normal diplomatic exchange between Washington and Moscow. And, as President Barack Obama himself famously noted, the United States has to be able to walk and chew gum at the same time—meaning that relations with Russia cannot be suspended while the very necessary investigation and documentation of what happened during the 2016 elections remains ongoing.

In the last several weeks, Putin has had important summit meetings with German chancellor Angela Merkel, Japanese prime minister Shinzo Abe and Turkish president Recep Tayyip Erdoğan. The Russian-sponsored Astana process, in conjunction with Turkey and Iran, is advancing a plan for creating “de-escalation” zones in Syria, while the United States must weigh the benefits of working with Syrian Kurds against the Islamic State versus the inevitable rupture in relations that will occur with Ankara. A new president, Moon Jae-in, is taking the reins in South Korea, and Seoul may thus shift on both missile defense and greater investment in Russia while reaching out to Moscow to help facilitate a new dialogue with the north. The situation in Ukraine remains highly volatile while there remains the prospect of another flare-up in fighting between Armenians and Azeris in Nagorno-Karabakh.

Lavrov brought the same message to Washington that was relayed to Secretary Rex Tillerson in Moscow: in all the conflicts and crises where Russia has equities at play, the Kremlin is willing to talk to the United States, but any expectation that Moscow will simply defer to U.S. preferences is out of the question. And here’s the rub: any hope of cooperation with Russia will rest on American willingness to broker and accept compromises. Yet, in the current atmosphere in Washington, the president and the secretary of state have almost no latitude to bargain. Indeed, given how some members of the U.S. media seemed anxious to tie the timing of Lavrov's visit to Comey’s firing, even though the trip was scheduled well in advance, shows how difficult it is to discuss U.S.-Russia relations in anything resembling a normal matter. Yet the first possible test—whether the U.S. can work with the Russian-Turkish-Iranian process for de-escalation zones in Syria, and leverage Russia’s own improving relations with the Gulf Arab states (notably Qatar) and the Putin-Netanyahu channel between Russia and Israel, in order to bring a Bosnia-style pause to the Syrian bloodletting—is already appearing to face insurmountable obstacles.

Lavrov will also depart Washington with firsthand experience—especially given his last press conference with Tillerson—of the charged atmosphere surrounding Russia in the American capital and on the part of its political establishment. When he returns to brief Putin, will he advise giving Trump more time, to see if, say, by late summer the tempest will have settled down and talks resumed? Or will he echo the conclusions increasingly being voiced by the Russian expert community, that any amelioration in relations with the United States is impossible, and that Russia should forge ahead with its own agenda in the Middle East, the Far East and eastern Europe, even at the risk of greater confrontation with the West?

From the U.S. side, the Lavrov visit should also force statesmen and sober-headed leaders on all sides of the partisan divide to step back and consider: are U.S. interests served by the current deterioration? Henry Kissinger’s presence in the Oval Office today suggests that there is some effort underway to keep the U.S. national-security establishment focused on the big picture and the endgame, rather than crafting policy in response to the cable-news crawl and comedy shows.

Ultimately, the Trump administration has to determine whether the points that Lavrov delivered are worth considering. And no one should minimize the very real differences between the United States and Russia on a whole host of issues. It may be that the proposals offered by Moscow do not serve and advance U.S. objectives. But we have to keep negotiating with Russia to determine whether we can find common ground. And if we end up eschewing what Russia proffers, I want that rejection to be grounded in a sober assessment of what serves American interests.