Lawmakers Need a Russia Sanctions Strategy with an Exit Plan 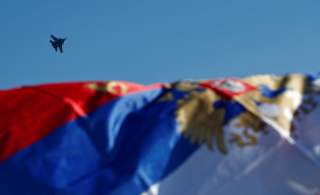 The Russia-sanctions train appears to be accelerating out of the congressional station, which makes it highly unlikely that both chambers of the Legislative Branch will want to revisit its provisions, especially when escape from Washington’s heat beckons with the forthcoming summer recess. Nevertheless, it behooves members of Congress, if they are determined to continue with this course of action (and the absolute majorities voting in favor of different versions of the sanctions in both the House of Representatives and Senate, far above the number needed to override any possible presidential veto), to take a pause and consider some changes.

Our European allies, when they first imposed their wide-ranging sanctions on Russia for its actions in Ukraine, built in a critical safeguard into the process: the semi-annual review process. Because EU sanctions must be renewed every six months, the Europeans have the opportunity to assess whether any progress has occurred. Also, they have the opportunity to adjust those sanctions either to address further infractions or to encourage positive developments. There is a greater flexibility in the European process that the present codification of U.S. sanctions lacks. Currently, there is neither a specified span of time after which sanctions can be revisited nor is there clear criteria that specifies when Russia might be judged to be in compliance with the provisions of those sanctions. Additionally, there is no mechanism for rapid or effective graduation should positive outcomes be achieved.

Many experts have concluded, in retrospect, that the U.S. grain embargo against the Soviet Union after its invasion of Afghanistan would have been most effective if it had been promulgated for a one-year period. That would have sent a clear signal of U.S. disapproval and it would have avoided putting the United States in a corner. Over time, the Soviets found ways around the initial ban that did not compromise their policy in Afghanistan and, ultimately, the embargo sputtered out as domestic commercial pressure from U.S. farmers to restart sales won out over geopolitical aspirations. Experts assisting the House of Representatives in reframing the initial sanctions proposal also removed some of the provisions that would have been most likely to create problems with key U.S. allies and undermine trans-Atlantic cohesion on the existing sanctions regime.

Given the depth of anger in the U.S. Congress over Russian actions in Syria, Ukraine and over the 2016 elections, some legislative response was inevitable. But imposing the major sanctions contained in both legislative drafts, along with a time limit that caps off at 2018—after the Russian presidential elections are held and after the conclusion of the U.S. midterm elections—would be wise. That way, Congress could then review and assess whether progress has been made in Syria and Ukraine, which might be a more effective wielding of U.S. geoeconomic tools. Beyond that, members of Congress, who have made it clear that they do not trust the current occupant of the Oval Office to determine when Russia has met the criteria for having sanctions lifted, may also want to consider whether they want to deny that prerogative to future occupants of the White House. Sooner or later, there will be a new U.S. president and, if only for reasons of biological realism, there will be a new president sitting in the Kremlin. There would be no ability, under the current legislation, for a future U.S. president to be able to rapidly take advantage of changed conditions in Moscow. History shows that the lack of flexibility or graduation mechanisms in congressional sanctions can create unnecessary complications for the United States. For example, it took the country two decades to graduate Russia, even after it proved that it had been in full compliance with the provisions of the Jackson-Vanik sanctions. Again, our European colleagues, especially French president Emmanuel Macron, who also faced what appeared to be Russian efforts to derail his election, still recognize the need for flexibility in how and when sanctions are applied on Russia—and they want to be able to adapt to the possibility of conditions that have changed.

In the past, Congress applied sunset clauses to sanctions it had passed against countries like Iran. Those clauses required the legislative branch to undertake periodic reviews to determine if renewal was warranted. Present sanctions against Russia do not have such provisions and thus carry the risk that they might not compel Moscow to moderate its behavior. Instead, Russia may conclude that it has no incentive to offer concessions since there appears to be little chance that it could meet the conditions that would prompt Congress to lift the sanctions.

Lawmakers believe that President Barack Obama did not sufficiently punish Moscow for its perceived transgressions in 2016 and that President Donald Trump has little incentive to do so, so they want to ensure that an American stick is clearly on display. But, as the former president observed, one always needs to have “offramps” should a situation change. Congress may not be in a mood to put provisions in the bill that is being prepared for the president’s signature—but they should consider some revisions, if not now, then down the line—so that the bill does not lock U.S. policy into a dead end.

Image: A Russian fighter jet performs during a demonstration flight, as a Russian national flag is seen blowing in the wind, at the MAKS 2017 air show in Zhukovsky, outside Moscow, Russia, July 21, 2017. REUTERS/Sergei Karpukhin​