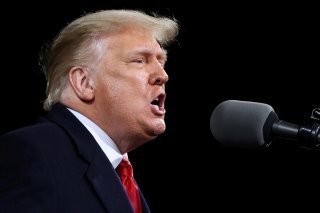 TAIPEI, Taiwan — After defeating Donald Trump in the recent presidential election, presumptive President-elect Joe Biden wasted no time announcing a team consisting of alumni from the Obama administration to develop his national security and foreign policy. It appears that the Biden administration is eager to press the reset button on many of Trump’s signature policy platforms in these areas. But the lack of confidence in outgoing Trump and his evangelical team should not make Biden’s advisors blind to those things that Trump got right. In particular, they should not seek to make a U-turn on Trump’s policy on Taiwan.

The United States cannot afford Biden’s ascension to inaugurate a third-term of a Barack Obama policy on the Western Pacific. Of course, Obama had his successes. But his failures were costly, particularly those predicated in his confidence that Beijing would reciprocate a commitment to build a foundation for a “new great power relationship” on mutually strategic trust. On this, one of Obama’s greatest oversights was that he initially took President Xi Jinping at his word in the Rose Garden summit at the White House that China would not militarize coral islands and reefs in the Paracel Archipelago of the South China Sea. In fact, this was already happening at the very time that promise was being given. Unhindered by preemptive American action, this tactical development rapidly altered the strategic architecture and military posture of the region to the detriment of the interests and prestige of the United States, as well as regional allies such as the Philippines. The gravity of this oversight has been substantial.

Even more is at stake in the case of Taiwan, where the cost of American failure will likely be far more profound and far-reaching. Trump’s “art of the deal” playbook worked in this case because his enablers correctly calculated the weight that China places on the Taiwan issue. What the incoming Biden team needs to ask is why this issue is so heavily weighted, and what this has to say about the importance of Taiwan to America’s own strategic calculus in the region and its credibility.

With the departure of Trump, the greatest challenge for the Biden administration is looking beyond the language that dominates the narrative on what China calls the “Taiwan problem.” It has largely failed to keep pace with recent developments in China, which has been accelerating on the back of Beijing’s eagerness to exploit its better management of the coronavirus crisis vis-a-vis that of the United States.

Unsurprisingly, national reunification continues to be the official lens through which the Taiwan problem is viewed in China. Yet in reality, Taiwan is now first and foremost approached by Beijing elites in view of its geostrategic significance. Of particular importance is its perceived role as the key to China attaining hegemony in the Western Pacific, and the gateway to China shifting from being a regional power to a bona fide global leader.

In view of this, the U.S. commitment to defending Taiwan should no longer be seen as a subordination of America’s interests to its founding values and democratic ideals, let alone a bargaining chip for gaining concessions on trade and investment from China. Taiwan is now pivotal to the United States retaining both its global standing and national interests in the Pacific region, and to heading off challenges elsewhere around the world.

Most importantly, Taiwan is the key to retaining some restraints over an already-established global competitor. Weak U.S. actions on Hong Kong, Xinjiang, Tibet, and human rights elsewhere in general arguably reflect America’s growing incapacity to guide Beijing to assume the mantle of a “responsible stakeholder” in global affairs. Without a renewed commitment to that role, it would be disastrous for Taiwan, the region, and, in general, the democratic world, if the United States were to sit by and allow China to make significant strategic gains under the dubious premises of “reunifying” China.

To understand the evolving mindset of Beijing’s leadership towards Taiwan, one must appreciate these two critical strategic calculations and comparative advantages.

The first is the geographic location of Taiwan in China’s strategic calculus.

Much has been written about strategic competition between China and the United States for control of the southern leg of the first island chain. This is the part that extends from the Ryukyu Islands and the Riau Archipelago. Effectively controlling this part of the chain is the first and arguably most crucial condition for China posing a direct threat to American assets in Guam and elsewhere in the Western Pacific region. The pivotal role of Taiwan is that its central location and comparative size effectively make Taipei the control point of this part of the chain. This is reflected in General Douglas MacArthur calling the island an “unsinkable aircraft carrier” although a better estimation would be to say it is equivalent to ten unsinkable aircraft carriers. Taiwan’s relation to the island-chain is like that of a fence post to a fence’s boards. If one removes some of the boards, then a fence can retain its integrity and be readily repaired; uproot the post and the entire fence falls with it.

For Beijing, Taiwan is the key for enabling the People’s Liberation Army’s Navy (PLAN) to play a greater role in realizing a Chinese hegemony throughout the Western Pacific and potentially beyond. It is from this perspective that many “experts” get things wrong. What defines the strategic relationship between Taiwan on the one hand, and the Bashi Channel and Miyako Strait on the other, is not that controlling the latter (i.e., the Miyako Strait to the north of Taiwan) cuts the United States off from the former (i.e., Taiwan from Okinawa). Rather, it is that cutting the U.S. Navy off from Taiwan consolidates China’s control over the Miyako Strait and the Bashi Channel.

When Taiwanese media reported Chinese hawks as advocating a strategy of “keeping the island but not the people,” this geostrategic imperative is arguable what was being referred to in Chinese Mandarin. It has already appreciated that this was not a threat of annihilation, but an emphasis on how the new primacy of the geographic value of Taiwan has come to overshadow the issue of its cultural and historical links with China.

Yet the bigger problem is arguably the second one, which relates to how Taiwan’s significance extends beyond security and onto a broader nexus that incorporates economic issues and diplomacy. This is a key point Taiwanese politicians and officials have attempted to make through an unofficial campaign to promote Taiwan as an “island of resilience” and a “logistics center,” and to emphasize the island as an “indispensable” pillar of the region’s current economic and geostrategic order. Unfortunately, this is the Beijing stealth message that has gained too little traction in the mindsets of the Obama alumni association.

The nexus between the economic and security aspects was partially addressed in Ian Easton’s Chinese Invasion Threat. As Easton elucidated, Chinese analyses have concluded that taking Taiwan would position China to deal enormous damage to Japan’s economy—a situation which would also apply to America’s other major regional allies, like South Korea.

Experts have also analyzed the potential impact on shipping costs. Should shipping routes be diverted from the militarized archipelagos that are now effectively controlled by China in the South China Sea, the additional costs will be substantial. But they are nothing compared to that which would be incurred if China’s control extended to Taiwan and across the whole southern section of the island chain. Added to this is the opportunity cost that the loss of Taiwan would present to the United States and its allies in the region. The danger herein is that China controlling Taiwan would likely fatally undermine efforts to strengthen trade networks and retain a “free and open Indo Pacific” region by offering alternatives to Xi’s signature Belt and Road initiative (BRI).

For instance, the Indo-Japanese so-called Freedom Corridor—now the Asia-Africa Growth Corridor—would be a pipe dream if Taiwan, which occupies a vital position in the corridor,  was controlled by China. The Trans-Pacific Partnership 11 (TPP-11), which the Biden administration is presumed to recommit to (or promote a new alternative to), would also be cut in half or bottlenecked by a BRI featuring a Beijing-controlled Taiwan as a regional logistic center. In such a scenario, any TPP proposal would have little hope of presenting itself as a credible competitor to the Chinese initiative.

Interrelated with this, of course, is the problem of diplomacy and international influence. Japanese diplomats have long let it be known, through unofficial channels, that they see American willingness to defend Taiwan as the litmus test for evaluating the tenability of the current Japan-U.S. alliance. If the United States does not stand firm on Taiwan, then Japan could force a re-shift in the alliance and begin to go it alone on trade resilience and defense. If Japan again gives too much primacy on its own strategic priorities, then old fears and animosities in the region could be rekindled. This could possibly push South Korea—where the United States also has a substantial military presence—closer to China.