Leave It to Europe: Why Iran Is Not (Solely) America's Responsibility 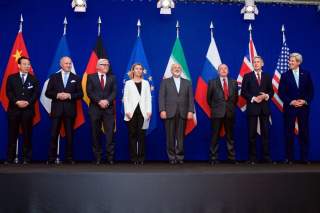 Even before a nuclear deal with Iran has been signed, the debate in Washington has shifted to the regional implications of a possible accord. But lessons learned from the success of the nuclear negotiations so far help explain why the United States should not lead international efforts to bring about regional cooperation with Iran. Instead, Washington should let its European allies take the initiative.

After all, it was the European Union—particularly France, Germany and Britain—that laid the diplomatic groundwork since 2003. They brought China, Russia and the United States on board and, in close transatlantic coordination, pursued a two-track approach of sanctions and diplomacy that led to the current nuclear talks.

For those negotiations to advance within the multilateral framework sustained by the Europeans, both the United States and Iran had to demonstrate three things: a willingness to accommodate the other side’s major interests, a readiness to disregard fundamental differences and the ability to compartmentalize and de-politicize the issue at hand.

Regarding the first, Washington and its allies overcame their fears and accepted a limited Iranian enrichment program—despite earlier UN-backed calls for its full suspension. The Iranians compromised just by talking to the “Great Satan,” after ostracizing the United States for more than three decades.

Secondly, both sides have accepted the other’s domestic discourse. For Iran, the narrative is about how the international community is ready to accept its demands to keep what Tehran insists is a peaceful nuclear program, while dropping its sanctions and also helping to modernize this program. In the United States, the narrative is that considerable concessions have been extracted from Iran, which agreed to substantial program limitations, both of proportions and duration.

The third success factor of the talks lies in compartmentalization and de-politicization. By focusing on the nuclear issue—and excluding everything from human rights to terrorism from the negotiations—the aim is to find creative, but sustainable technical solutions that dodge the broader political questions.

However, certainly the first two ingredients are not yet there when it comes to regional cooperation. Washington’s major accommodation would be to accept that Iran has a (legitimate) role to play in the region, while Iran would have to overcome its refusal even to talk to Saudi Arabia—its regional rival—based on sectarian as much as on geopolitical grounds. Both sides would have to be ready to ignore fundamentally different viewpoints on regional order, not least because the power competition between them—with Israel and the Arab Gulf states each playing their part—does not lend itself to the (comparatively easy) “no bomb” compromise in the nuclear field.

Moreover, simply getting the nuclear deal through will likely exhaust the necessary willingness—both in Tehran and Washington—to accommodate the other side.

This is where the EU comes in. Establishing a multilateral framework, the EU’s focus should be on the third ingredient, i.e. to de-politicize and compartmentalize possible areas of cooperation. Maritime security in the Gulf and the situation in Gaza are two such practical issues on which the European Union could engage Iran.

A regional maritime-security regime would broadly be based on the United Nations Convention of the Law of the Seas (which neither Iran nor the United States have ratified) that regulates nonmilitary fields of cooperation such as maritime safety, fisheries protection, marine-environment protection and port security. Such an approach would also dovetail with the G7 declaration last month to strengthen maritime governance in a cooperative, rules-based approach at the regional and global level.

Addressing the Gaza conflicts means involving Iran in the international efforts to implement the unity government that the Palestinians agreed on, but so far failed to put in place. Even such narrow and technical cooperation can be a difficult hurdle to jump, even before one could start thinking about conflict resolution in Yemen or Syria.

Given the Old Continent’s internal and external woes, it may seem naïve to expect Brussels to provide a framework for regional cooperation with Iran. However, with clear signals from Washington that it would support such a European lead in the aftermath of a nuclear agreement, the EU and its member states should be happy to oblige.

Previous European initiatives with strong U.S. backing include the Helsinki Accords of 1975, which helped establish security cooperation between the Cold War superpowers (the United States and the Soviet Union) and the Madrid and Oslo talks leading to the Israeli-Palestinian accords of the early 1990s. While these cases also show that agreement cannot guarantee lasting success, the diplomatic opening that a deal can create in its wake is what counts.

Such momentum, however, needs to be given a direction. A single nuclear deal cannot bring fundamental change to a region torn by religious strife, sectarian rivalry and weak governance. Add to this the fact that the United States has now entered the pre-election season, and it becomes clear that it is up to the European Union as the often-overlooked mediator of the nuclear talks to make a push for regional cooperation after a possible deal.

The United States, happy to direct its top-level diplomatic resources to other burning crises, should welcome and support such an initiative of its European partners.

Cornelius Adebahr is an associate in the Europe Program at the Carnegie Endowment for International Peace. He was based in Iran for two years and taught political science at the University of Tehran.