Leaving the INF Treaty Is a Gift to Russia 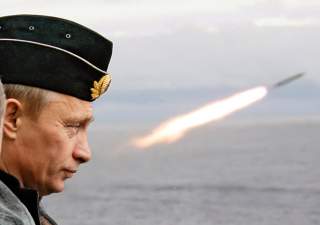 If President Donald Trump goes through with his threat to withdraw from the Intermediate-Range Nuclear Forces (INF) Treaty, he will make a serious mistake that will not only destabilize European security and undermine NATO, but could lead to dangerous consequences for strategic nuclear stability between the United States, Russia and China.

To understand why dumping the INF Treaty is so dangerous, it’s important to understand why the treaty was signed in the first place. During the Cold War, the superpowers both decided to field systems that filled the gap between the use of small battlefield nuclear weapons and the horror of a strategic nuclear exchange by creating a class of “intermediate” weapons that could conduct nuclear war in the European theater, but without reaching the U.S. and Soviet heartlands—at least not immediately.

The problem, of course, is that one man’s “intermediate-range” weapon is another man’s “strategic” weapon. Putting aside war-gaming delusions about sustainable command and control, such strikes would be hard to discriminate from strategic strikes, and catastrophic escalation would be all but certain.

Ronald Reagan and Mikhail Gorbachev solved this problem by leaving both battlefield and strategic arms in place but severing the link between them that could lead too quickly to general nuclear war. Critics of the original treaty decried this as undermining NATO’s security, but in reality nothing had changed: The Soviet Union still had conventional superiority, and NATO still had a doctrine of nuclear first-use in the event of invasion.

The chief argument now for withdrawing from the INF Treaty is that the Russians are violating it. This is undeniable. The Russians are in fact testing weapons at prohibited ranges in direct violation of the treaty.

They are doing this, however, not because they are strong, but because they are weak. The Russians, ironically, are now in the position NATO was in during the Cold War, a conventionally inferior power whose only equalizer is nuclear weapons. Unlike NATO, however, the Russians are not in a defensive position, but rather remain a revisionist power bent on threatening their neighbors. They are conspicuously violating the treaty as an attempt to intimidate the Europeans by raising the specter of a regional nuclear war if Russia does not get its way in the event of a conflict.

This is why scrapping the INF Treaty plays right into the favored Russian scenario, in which the burden of nuclear escalation would rest, once again, upon NATO. Right now, Russian strategy in Europe is likely centered on seizing a small piece of NATO territory, sitting on it for an extended period to prove that Article V is a sham and then threatening tactical nuclear use if NATO tries to drive them out.

Proponents of re-nuclearizing the theater would argue that this is precisely why the United States must have a symmetrically configured theater deterrent, so that any Russian threat could be balanced with a corresponding American threat.

That would be a better argument if it were still 1985. The problem for these nuclear enthusiasts—one they omit by selective memory or poor strategic judgment—is that there is no longer a central front between NATO and Russia on which such exchanges would take place. NATO’s only choices (as Russia knows) would be to respond with nuclear use on our own allies or on Russian territory, which would raise the escalatory danger far beyond whatever was at stake in a small, localized conflict. The Americans would blink, Russia’s point would be made, and NATO would eventually dissolve.

The better answer is to close off any such option to the Russians by bolstering NATO’s conventional capabilities, and thus warn the Russians that even if they win, they lose. They might be able to muster a locally superior force and take territory, but they cannot defend it. They will inevitably be driven out, and then the burden of escalation will fall upon them, not us, which is exactly how it should be. If they invade, they will be defeated. If they escalate, they will be destroyed—and by choices they, not we, will make.

There are also loose arguments being made that the United States needs to exit the treaty so that it can create forces to counter the Chinese in the Pacific. This makes no sense. What deterrent purpose is served by intermediate-range nuclear arms that is not being served already? Is this predicated on some sort of “limited nuclear war in Asia strategy” that has not been enunciated, or likely does not even exist? Where would we base such weapons? Japan? South Korea?

The China rationale is more likely a fig leaf than an actual plan, but if it reflects some sort of a new line of thought about nuclear war in the Pacific, then it deserves more debate rather than being treated as an afterthought to exiting the INF Treaty.

A more confident America would consult with its allies and drag the Russians back to the negotiating table for the dull, necessary work of showing that NATO cannot be panicked into responding to Russian antics by scraping entire treaties. (We would also avoid bumbling into a trap where the Russians could escape strategic limits by reclassifying their long-range weapons as intermediate-range.) The United States and NATO won the Cold War by constancy and perseverance, and they should not now allow themselves to be stampeded by insecurity and vanity into taking the self-defeating and strategically incoherent path the Trump administration is now considering.

Tom Nichols is professor of national security affairs at the Naval War College and an adjunct at the Harvard Extension School. His opinons do not reflect those of the U.S. government.