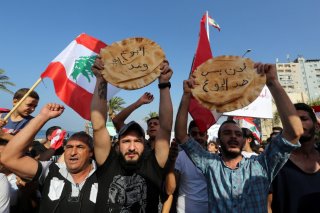 Lebanon is facing multiple social, economic, and political calamities on account of a combination of factors including a corrupt political class, a non-state actor Hezbollah acting at the bidding of Iran, and a United States-led sanction regime against Iran, Hezbollah, and their proxies. The resulting situation, if not soberly and swiftly attended, will lead to a catastrophe no less consequential than the mass starvation of the Great War (1914-1915) that exterminated one-quarter of Lebanon’s population. In fact, this ominous statement is a cognitive reflection of the conditions that prevailed during the war, which are more or less playing out today under different circumstances and political actors. Should the United States continue inconsistently checking the power of the so-called Iranian-led Axis of Resistance without offering an outlet of relief to Lebanese, in much the same way that World War I’s Allied forces tried to subdue the Ottoman government in the Levant, they are doomed to be sacrificed on the altar of the American-Iranian struggle for power in the Middle East.

Early in the Great War, the Ottoman Empire, in alliance with the Central Powers (Germany and Austria-Hungary), closed the Dardanelles waterway, the major line of communication between Russia and its allies. U.S. Ambassador to Constantinople Henry Morgenthau emphasized that “this simple act would deprive the Czar’s army of war munitions, destroy Russia economically by stopping her grain exports, her greatest source of wealth, and thus detach Russia from her partners in the World War.”

The Allied powers retaliated by bombing Turkish fortifications along the Dardanelles and by enforcing a blockade of the entire Eastern Mediterranean to cut off supplies to the Ottomans. They also prepared potential landings in Gallipoli and along the Syria-Lebanon-Palestine littoral. Fearing an Allied landing in Beirut with support from the pro-French Christian communities of Lebanon, the military governor of Greater Syria (Lebanon, Syrian, and Palestine) Jamal Pasha responded by enforcing his own blockade on Mount Lebanon and Beirut.

The Allied blockade shut down all supply lines to the coastal region of Greater Syria. Travel from and to Beirut ceased, remittances from abroad stopped, and foodstuffs had become a rare commodity since Lebanon did not invest in subsistence crops. More specifically, having a fragile and transactional economy reliant on global capitalism, Mount Lebanon and Beirut’s economy immediately collapsed and people could no longer earn a livelihood. Conversely, Jamal Pasha sealed off the Beqaa Valley, the breadbasket of Lebanon, from Mount Lebanon along with Palestine, and Syria; restricted the transport of livestock and livestock-related products, which were scarce in Mount Lebanon; prohibited the export of cereal and wheat to Mount Lebanon; and enforced a blanket control of crops, especially wheat.

The blockades resulted in mass starvation, which Jamal Pasha used as a war strategy to batter the Christians into submission, sever their contacts with the Allied powers, and deny provisions to Allied forces should they land in Beirut. No less significant, the Ottoman government pursued an economic policy that introduced a banking moratorium and paper money, which swiftly depreciated to virtually no value. Not only did Lebanon lack food to feed its people but people had no income to buy any available foodstuff at staggering prices. Moreover, Jamal Pasha used oppressive tools, such as martial law, forced labor, conscriptions and exile, and executions of Lebanese leaders to reinforce his war strategy. As famine spread, malnutrition helped the spread of cholera, malaria, dysentery, and influenza among local people.

Among the first news outlets to take note of the famine was the New York Times, which featured an article on September 16, 1916, based on an American woman’s reportage. Accompanied by images of misery, starvation, and death, the article read, “We passed women and children lying by the roadside with closed eyes and ghastly pale faces. It was a common thing to find people searching garbage heaps for orange peels or other refuse, and eating it greedily when found. Everywhere women could be seen seeking edible weeds among the grass along the roads.”

Commenting on the blockade as a war strategy to mercilessly suppress the Lebanese, Jamal Pasha, according to a French intelligence report, allegedly boasted: “We have rid ourselves of the Armenians by the sword. We shall do away with the Lebanese by famine.” Ottoman War Minister Enver Pasha reportedly said: “If the French come, they would only find rocks.”

Today the Lebanese face a similar situation. They are wedged between an American-led sanctions regime against Iran and its proxies the Syrian regime and Hezbollah, on one side, and an Iranian-led axis of resistance, including pro-Iran Iraqi militias, the Syrian regime, and Hezbollah on the other. Broadly speaking, whereas the West supports the United States, China and Russia support Iran. Yet what has made the social, economic, and political situation in Lebanon unbearable and deeply vulnerable to the U.S.-Iran confrontation is the fact that little in the country has changed since its independence.

Pegged to the dollar, Lebanon’s economy has remained reliant on the global economy and consumerism. The structural problems that have plagued Lebanon have become steeped in the country’s confessional system and remain unresolved. Despite its national motto of “No East/No West,” Lebanon’s weakness has invited foreign intervention and its identity, although ostensibly Arab, remains contested. Significantly, Lebanon’s Christians failed to “Lebanonize” Muslims while the Muslims failed to “Arabize” Lebanon, as was hoped for by the authors of Lebanon’s National Pact. Moreover, feudal leadership based on tax farming during Ottoman rule transformed into a feudal political leadership, which subsequently increased its power at the expense of the state. The confessional system became the fodder of spoils for the class of sectarian elite who nurtured a patronage system that permeated the whole Lebanese bureaucracy.

As a result, Lebanon’s socio-political landscape provided a suitable environment for non-state actors such as the Palestinian Liberation Organization, Palestinian Front for the Liberation of Palestine, the Ba’ath Party, and recently Hezbollah to flourish and affect the country’s politics. Hezbollah gained national momentum after it forced Israel from southern Lebanon in 2000, and Lebanon’s political elite have been unable to curb its power. Hezbollah seized Beirut in the summer of 2008 and left Lebanon’s political elite unable to resist Hezbollah and, by extension, Iranian strategy in the Middle East. Lebanon’s mafia-like political class has now made a Faustian pact with Hezbollah under which they provide legitimate cover for Hezbollah in return for the ability to continue enriching themselves at the state’s expense.

Consequently, Lebanon has spiraled downward into a failed state. Its October 17 Revolution has failed thus far to free Lebanon from the yoke of its corrupt political class and Hezbollah. Meanwhile, Hezbollah has transformed itself into a hybrid non-state actor that is at the same time integral to the state, independent of the state, not accountable to the state, an indirect or direct recipient of state largess, a mastermind of illicit activities, a defender of politicized and/or clientelist Shi’ism, an Iranian proxy, and a regional militant actor. In other words, Hezbollah has reinvented the concept of the state in Lebanon.

Consequently, American sanctions against Hezbollah have affected more the general public than the Islamist party. Hezbollah has more or less insulated itself from American sanctions by operating a parallel economy separate from state institutions. Regardless, according to a recent UN policy brief, 82 percent of the population lives in multidimensional poverty, which takes into account factors other than income, such as access to health, education, and public utilities. Since the crisis started in 2019, the lira has lost 90 percent of its value. Lebanese today have been reduced to a humiliated, pauperized mass, hanging by a thread. Each day is a life-and-death struggle for bread, medicine, gas, electricity, and medical care.

In much the same vein as during World War I’s Allied blockade, most Lebanese today support the United States as they supported the British and French during the Great War. But they fear that they are being ground up between American sanctions and Hezbollah’s hegemony and oppression. According to many Lebanese, Washington has inconsistently targeted Iran and Hezbollah without sufficiently helping the Lebanese people overcome the impact of sanctions on their society. They worry that, absent immediate assistance, their fate is not going to be much different than that of their ancestors during the Great War. For example, with regard to the country’s serious power crisis, U.S. Ambassador to Lebanon Dorothy Shea recently supported a plan to supply gas to Lebanon from Egypt and Jordan via Syria. But the U.S.-backed plan, which has been approved by Egypt, Syria, Jordan, and Lebanon, is imperiled by political and logistical risks. Notwithstanding that the pipeline is old and has not been used in years, and that the plan is complicated by U.S. sanctions on the Syrian government, both Egypt and Jordan are consumers of Israel’s gas, which has been reconsidering its supply to both countries. Needless to say, the plan suddenly developed following a speech delivered by Hezbollah leader Sayyed Hassan Nasrallah stating that Iran will send ships to Lebanon carrying fuel for hospitals and bakeries.