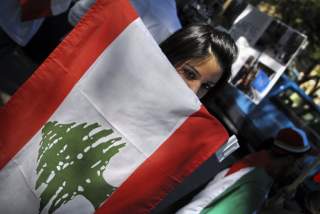 BEIRUT, Lebanon—Lebanese president Michel Suleiman’s term officially ends on May 25, but who his successor will be remains a mystery.

Despite several attempts, Lebanon has thus far been unable to elect another president. The country’s parliament, half Christian and half Muslim by way of an agreement to end the civil war in 1989, is tasked with electing the Arab world’s only Christian president. The president is always from the Maronite Catholic sect, roughly one-fifth of the Lebanese population, with the position of prime minister reserved for a Sunni and speaker of the parliament for a Shiite.

The first round of voting, held on April 23, failed to produce a winner, with no candidate garnering the required two-thirds majority to win, though “blank white paper” came in first with fifty-two votes, followed closely by civil war-era leader Samir Geagea, head of the militia-turned-political party Lebanese Forces, with forty-eight votes. After the first round of voting, a simple majority of the 128 members would have sufficed, but several sessions have already been canceled due to a lack of a quorum.

Parliament, unable to agree on a law last year to govern its own reelection, simply extended its own term for seventeen months, and there’s a real possibility that they may try to do this to the presidential term to avoid a vacancy in that post. For his part, President Suleiman has adamantly rejected the possibility of having his term extended, calling it “undemocratic.”

So what’s the holdup? Lebanese politics is divided into two main camps, known as the March 14 and March 8 coalitions. March 14 is united in its opposition to Bashar al-Assad’s Syrian regime and its Lebanese ally, Hezbollah, while March 8 supports Assad and Hezbollah.

March 14, comprised primarily of the largely Sunni Future Movement and traditional Christian parties such as Kataeb and the Lebanese Forces, put forward Geagea for president, likely knowing that his candidacy would not go anywhere.

Geagea’s defeat by fifty-two blank sheets of paper put to rest any hope of him becoming president, but did manage to resurrect ghosts of Lebanon’s bloody past. Geagea stands accused of a number of war crimes, including Christian-on-Christian violence at the end of (and immediately following) the civil war.

Most notably, however, his candidacy brought consternation to the Sunni community of Tripoli, Lebanon’s second largest city and normally friendly territory for March 14. Geagea was convicted of assassinating then-prime minister Rashid Karami, a proud son of Tripoli, during the civil war, a crime for which he spent eleven years in prison, largely in solitary confinement, during Syria’s heavy-handed post–civil war occupation of Lebanon. However, Geagea’s defenders, including many Sunnis, deny the charges and point to his imprisonment and his wife’s loyalty during his incarceration as signs of his commitment to Lebanese independence and sovereignty. This was a time when many prominent anti-Syrian politicians were riding out the occupation in the cafes of Paris, yet Geagea stayed in Lebanon.

On the other side of the Lebanese divide, in the March 8 camp, Geagea’s principal rival in Christian politics, Michel Aoun of the Free Patriotic Movement, returned from exile in 2005 after Syrian troops left. Aoun made nice with Hezbollah and the Syrian regime, hoping to ride their support to the presidency. He briefly held that post at the end of the civil war before being ousted by the incoming Syrian occupation and choosing to go into exile in France.

Aoun leads the largest Christian bloc in parliament and his son-in-law, the charismatic, new foreign minister Gebran Bassil, has raised his profile with a reputation as a hard worker by doing interviews on traditionally hostile outlets such as Future Television. Whether or not Aoun is able to ascend to the presidency, Bassil’s name is certain to be thrown around as a candidate in coming years. Aoun, his octogenarian father-in-law, has played hard-to-get on his electoral ambitions, though he’s certainly working behind the scenes to get support as a consensus candidate. However, his alliance with Shiite Hezbollah makes certain Sunni and Christian factions unlikely to consider backing him without significant political benefits to themselves.

In an officially sectarian country like Lebanon, religious leaders become important political figures, and the Maronite Patriarch Bechara el-Rai has been working to avoid a vacancy in the Christian presidency. Jean Kahwagi, the Maronite head of the Lebanese Armed Forces, is another potential candidate. He has tradition on his side; the last two elections have seen an LAF head win the presidency. Other nonpolitical figures could emerge such as Riad Salameh, head of the country’s central bank, who had a long tenure there and is widely credited with maintaining the stability of Lebanon’s currency, the lira, through turbulent political ups and downs.

In short, Lebanon’s presidential elections are an important test of the functionality of the country’s democratic institutions. They are also symbolically important to the country’s Christian community, representing roughly a third of the Lebanese population. Christians want reassurance that they are still important political players, despite demographic trends moving against them since independence in 1943, when they were a majority of Lebanon’s population.

Whoever the next president is, he’ll face the steep task of maintaining stability in the face of turbulence, most notably in neighboring Syria. The Assad regime’s recent gains may improve regional security, but will give little hope to those here who have long battled to keep Syria from meddling in Lebanese affairs.

Sam Sweeney is a former Capitol Hill staffer based in Lebanon and currently completing his Master's Degree in Islamic-Christian Relations at Université Saint-Joseph in Beirut.