The Left Is Coming for America’s Middle East Allies 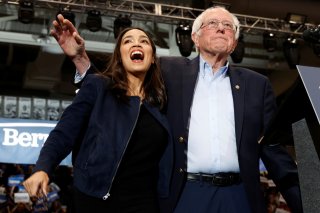 The American Left has become increasingly active on foreign policy over the last few years. With the recent violence of Israeli forces against Palestinian protesters, there seems to be a new appetite for those on the Left of American politics to engage with international affairs. The rise of the American Left over the course of the last decade is strongly associated with efforts to combat systemic racism, environmental injustice, and, above all, socio-economic inequality. There has been little interest in foreign policy but that seems to be changing in a new trend that should be especially worrying to America’s allies in the Middle East.

This potentially pits the Left’s progressive internationalism against liberal internationalism, the default foreign policy of the Democratic Party, which is broadly supportive of military intervention and American projection of power. Many in the United States have been very skeptical of whether the Left’s limited international affairs involvement will ever materially impact U.S. foreign policy or whether it is even a coherent set of foreign policy principles. It is often either ignored as either a set of anti-Trump reactions or a veiled form of Trumpian “isolationism.” This is, at least, an oversimplification.

While there have been some intellectual strands in America espousing a leftist foreign policy view defined by anti-capitalism, pacificism, and third-world solidarity, they have largely been relegated to college campuses in the Cold War and post-Cold War eras. Over the last few years, voices on the Left, led by Senators Bernie Sanders and Elizabeth Warren have increasingly questioned the post-Cold War consensus around free trade and U.S. primacy but, nonetheless, have supported U.S. diplomatic and economic engagement with the world and the advocacy of American values.

This is less a pacificist leftism and more representative of a strand of U.S. foreign policy thinking that advocates U.S. engagement with the world but questions the wisdom of military adventurism. Advocates of this almost Jeffersonian approach believe America should serve as an example to the world through its values and democratic system rather than looking to topple governments, pursue hegemony, and strongarm the world into a neoliberal economic order. At times, the Left’s foreign policy seems more informed of realist scholars like Stephen Walt and Andrew Bacevich, who advocate a less interventionist foreign policy, than Noam Chomsky or Marxist scholars like Emmanuel Wallerstein.

A Rising Level of Interest

The Left has been flirting with foreign policy for some time. When Bernie Sanders first pursued the presidency in 2012, it was rather self-evident that despite the senator’s long Congressional tenure, he seemed to have little interest in foreign affairs and was unable to articulate a coherent foreign policy vision. He resolved to correct this problem between presidential campaigns by taking a more active approach and hiring key staff that would deepen his involvement in America’s entanglements abroad. During the Trump administration, the Left became increasingly vocal about issues regarding trade, environmentalism, and the importance of diplomacy while also separating itself from the rest of the Democratic Party by balking its propensity to criticize Trump when he (at least rhetorically) signaled opposition to foreign conflict and broad military commitments.

But the Left’s most significant inroad into foreign affairs came with supporting efforts in Congress to halt U.S. support for the brutal Saudi war in Yemen. America’s support for Saudi airstrikes and a medieval siege made Yemen the worst humanitarian disaster in the world according to the United Nations while Riyadh’s supporters in Washington failed to communicate a meaningful explanation as to America’s interest in the conflict. For the Left, this seems to have represented the worst of American interventionist tendencies that are often rationalized on human rights and stabilization grounds. The fact that U.S.-Saudi ties are underpinned by a “corrupt bargain” involving petrol capital and the military-industrial complex further wettened the Left’s appetite to interrogate the nature of Washington’s allegiance to the House of Saudi.

But still, even the effort to halt American support for Saudi Arabia’s war was largely seen as belonging to more liberal Democrats in Congress, not the Left. The Left has also been largely alone in criticizing U.S. sanctions on humanitarian grounds and the coup that overthrew Bolivian President Evo Morales.

Israel’s crackdown in the Sheikh Jarrah neighborhood of occupied Jerusalem seems to be a turning point towards a more systemic infusion of foreign policy into the Left’s agenda. As many have noted, the specter of Israeli troops attacking Palestinian protesters, including inside the holy mosque, and the campaign to cleanse the area of Palestinians in favor of Jewish settlers drew comparisons to America’s aggressive crackdown on Black Lives Matter protests during the summer. American leftists that revel in questioning political orthodoxies and Overton Windows around issues of race and economic inequality began doing the same here.

Activists and elected officials associated with the Left are criticizing Zionism and referring to Israel as an “Apartheid state.” Congresswoman Alexandra Ocasio-Cortez tweeted “Apartheid states aren’t democracies,” directly challenging the narrative of Israel being America’s sole democratic ally in the Middle East. Not that long ago, such a statement would have been dismissed even by Democrats in Congress as anti-Semitic and disqualifying.

Some have argued that seeing Israel’s violence through the prism of racial and police violence in America is an illegitimate conflation of foreign and domestic affairs. But it is worth considering that the realist notion of treating international and national arenas as inherently immiscible spheres of policy is not shared by everyone. Liberal internationalists and neoconservatives advocate America spreading its own values by force, and U.S. support for Israel itself is in no small part because of the religious ideology of Christian Zionists.

Unlike previous episodes of interest in foreign policy, the energy regarding this issue and the impetus for action on the Left seems significant in comparison with previous episodes that only attracted the attention of some of the Left or saw the Left play a supporting role. It is also likely to spur greater interest on the Left regarding international affairs, particularly as it applies to America’s adventures and alliances in the Middle East.

In most of the world, the United States can claim some moral standing by operating behind democratic allies. American policy in East Asia or Europe and even Latin America is at least publicly (and sometimes credibly) presented as being the product of interaction and cooperation with orthodox democratic countries that share America’s values. That is certainly not the case in the Middle East. The region is a target-rich environment for those who wish to take on America’s overzealous interventionism and highly questionable Washington foreign policy establishment groupthink.

A Washington of Nervous Hawks

Democratic foreign policy since the Cold War has largely been defined by hawkish Democrats, and the party remains concerned about being seen as weak on defense. Over the combined sixteen years of the Bill Clinton and Barack Obama presidencies, the Pentagon was led by a Democrat for only fewer than a total of five years. A wholly separate foreign policy movement only came in the opposition to the Iraq War but then largely melted away after the election of Barack Obama. During the Obama administration, the president’s relative constraint was frequently met with rebuke and condemnation from Republicans, hawkish Democratic leaders in Congress, the U.S. foreign policy establishment, and even the mainstream media.

The term “leading from behind,” ironically a product of Obama’s intervention in Libya, became a shorthand for what critics saw as timidity, a lack of belief in America, kowtowing to America’s rivals, and defeatism in confronting America’s relative decline in power. But the election of Donald Trump, who criticized foreign policy elites during the campaign, rattled those critics who had assumed strong support for their brand of foreign policy assertiveness among the American public. Now even the Republicans were critical and cheering their derision. Their efforts to close ranks behind the status quo in America’s Middle East arrangements will be questionable moving forward.

It is unclear how successful the Left can be in swaying the Biden administration. While Joe Biden is often positioned as being part of the Democratic establishment, his early economic policies; some of his appointments, such as Secretary of the Interior Deb Haaland; and his non-appointment (Rahm Emmanuel) have been interpreted as a sign of Biden’s willingness to consider the Left’s priorities and preferences. Biden is a party politician. He sees the political party as the primary vehicle through which policy success is achieved in American politics. He is certainly far too conservative to adopt the Left’s foreign policy inclinations, but he does value party unity and has an appetite for punching left or the “Sister Souljah moments” seen by 1990s Democratic politicians as key to political success. The notion that Biden sees the Left as a constituency that, at the very least, needs maintenance bodes well for the prospect of its influence.